Schubart: Vermonters ready for an Ethics Commission that restores trust 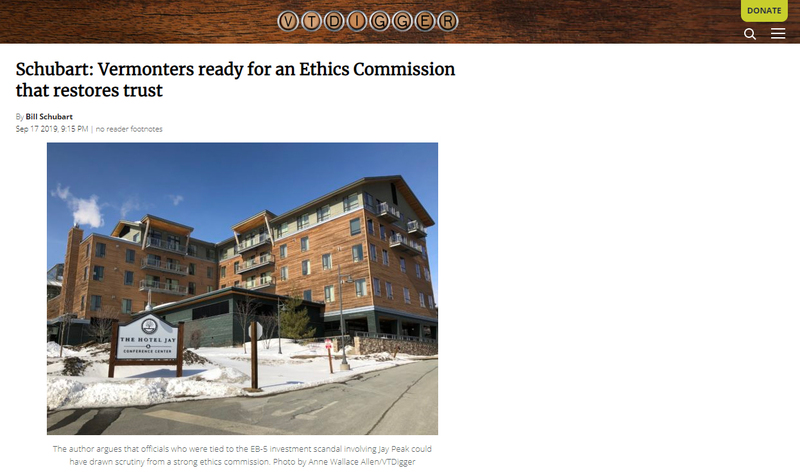 The author argues that officials who were tied to the EB-5 investment scandal involving Jay Peak could have drawn scrutiny from a strong ethics commission.

Bill Schubart is a regular columnist for VTDigger. He is a retired businessman and active fiction writer, and was a former chair of the Vermont Journalism Trust, the parent organization for VTDigger.

In a time of widespread citizen mistrust of their government institutions, what could be more important than rebuilding that trust?

The recent reversal from VT’s largely symbolic Ethics Commission (VEC) of its apparently only rendered opinion since its inception 20 months ago must have pleased the governor but further confused Vermonters.

In that ruling, VEC responded to an inquiry by VPIRG about a possible conflict of interest in Gov. Phil Scott’s ownership sale and financing of his share of his construction company to partners. The VEC found that the transaction was in conflict with their State Code of Ethics.

Then, last month, the VEC withdrew its opinion, citing “process errors,” by which it emerged the panel meant that the enabling legislation did not provide it with the authority to respond to complaints by anyone other than the politicians they’re charged with overseeing … fox? henhouse?

The seeds of this failure were evident in 2017 when the idea of creating an “Ethics Commission” was under discussion. Despite considerable favorable testimony by Vermonters, ethics experts and Secretary of State Jim Condos — a persistent champion of government transparency, inclusion and establishing such a commission — the Legislature deftly sidestepped any serious effort to create an independent commission that might assure Vermonters that legislative transactions serve Vermonters rather politicians.

Meanwhile, The Center for Public Integrity ranks Vermont 50th of all states on ethical enforcement. Vermont’s one of only three states with no central ethics infrastructure. The Center for Public Integrity, in partnership with Global Integrity, conducted a comprehensive assessment of state government accountability and transparency. The project used research by reporters in each state to grade and rank the states in 13 categories based on existing laws and analysis of how well they’re implemented.

Furthermore, in 2011, a six-year snapshot by Marquet shows Vermont is the most likely to lead the list for embezzlements among the 50 states and the District of Columbia. (Coventry: $876,000 missing & Hardwick Electric $1.6M, the largest municipal embezzlement in Vermont history among others).

None of these hold up to scrutiny. And while I’m willing to agree that Vermonters are mostly good people, even good people can be fallible.

The spate of recent embezzlements in the municipal sector, government officials pirouetting from their office to earn more working for those whom they’d been overseeing and the criminal sexual wrongdoing in the Senate are all examples.

But the EB-5 Jay Peak scandal is the largest in our 225-year history and one of the largest in the Security and Exchange Commission’s (SEC) own history. With an Ethics Commission in place, two governors, a senator, an agency secretary and several state officials might have at the least been warned not to represent that the investors’ funds were being audited appropriately by the state agency that was, at that time, also charged with promoting the program.

The following year, the state learned that the SEC was waist-deep into an examination of massive fraud and, as VT Digger shined increasing light on the unfolding scandal, the state denied any responsibility, took no action, and the scandal metastasized. Also, can we honestly say that in the myriad state contracts and employee expense vouchers there is no self-dealing?

A real Ethics Commission should not cost more than $300,000, surely a small price to pay (.00009% of the state budget to be precise), to ensure that Vermonters’ elected officials are serving them and not their own interests. The cost of defending or remediating ethical lapses vastly exceeds the cost of an effective Ethics Commission with enforcement capacity. One need only look at what we’ve already spent in time and money to defend the EB-5 scandal, and we’re only just beginning.

The ethics commission would have jurisdiction over the Legislature and executive branches as well as elected municipal officials and, to have “teeth,” it should be quasi-judicial in nature and have long-term appointments, immunity from lawsuits for official decisions, and enforcement authority through either the attorney general or special ethics counsel.

A recent reversal by the Ethics Commission of its ruling critical of Gov. Phil Scott’s relationship with his former company, DuBois Construction, has been cited by as evidence that the panel lacks any real authority.

Backed by a clear ethics canon, an Ethics Commission would first and foremost be a metaphorical conscience, secondly a practical educational resource for those elected to serve Vermonters, and lastly an enforcer of its guidelines. Like most preventive actions, it would pay for itself many times over. More important, isn’t it incumbent on us to learn from our mistakes so we don’t repeat them?

Many Vermonters spoke up supporting an Ethics Commission, but their elected legislators punted. The bill that passed largely ignored what Vermonters expected but provided legislative cover for their inaction, calling only for a part-time director and someone in Human Services to draft ethical guidelines, but with no enforcement capacity. Malfeasance is referred to as the Senate or the House for peer action, even though they’ve not fared all that well historically in policing themselves. In March of this year, the then-head of the Ethics Commission expressed concern that the mission of his commission, as currently constituted, is “toothless.”

Democracy must be a nation of laws. Statutes, regulations and governance conventions codify the continuum of Americans’ ethical beliefs and guide our decisions as we work to maintain civility. Otherwise, things fall apart. And when they do, it’s usually owing to corruption and arrogant abuse of power. But it can also be the naive “gee-whiz, we’re all honest” mindset – uncomfortably close to willful ignorance.

Vermonters are ready for a functional Ethics Commission that restores trust in their government institutions and their public servants.