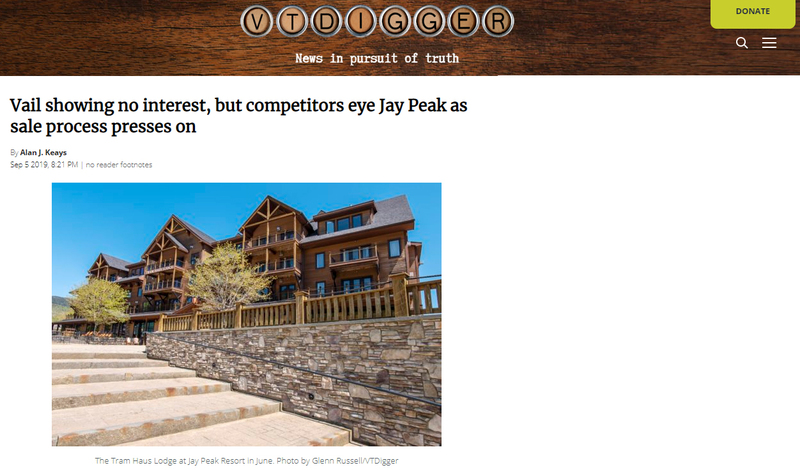 The Tram Haus Lodge at Jay Peak Resort in June.

Vail Resorts, a ski industry behemoth that has been gobbling up resorts in recent years, is not interested in Jay Peak, but a handful of other entities have visited the Northeast Kingdom resort now for sale, a company official told a local town board during a recent meeting.

One of the could-be buyers that have toured Jay Peak is a rival of Vail in the resort consolidation business, Alterra Mountain Company, based in Denver, Colorado, which also owns Tremblant ski resort in Quebec and Stratton in Vermont.

Officials have been tight-lipped about the sale of Jay Peak since it hit the market earlier this year.

Michael Goldberg, Jay Peak’s court-appointed receiver, is seeking through the sale to recoup money for EB-5 investors who put money into the resort for massive upgrades over nearly a decade that have led to fraud allegations and criminal charges.

At that meeting, Elander also talked to the board about the sale progress, including visits by potential buyers, according to the meeting minutes.

“The first one is Ultara, they possibly have the funds, second is FoSun (privately owned), third is Pacific Group, fourth is two different groups Snow Operating and a fund called Oz, fifth is AWH (privately owned),” the minutes stated. “He (Elander) stated Vale {sic} showed no interest in Jay Peak.”

Ultara is a misspelling of Alterra, which, according to the company website, is a conglomerate of many ski resorts. While Vail offers its Epic Pass for its various resorts, Alterra counters with its Ikon Pass for its ski areas.

Vail Resorts has been a buyer of other Vermont resorts in recent years, and has been talked about as a potential Jay Peak purchaser. Earlier this summer, Vail Resorts announced it would acquire Peak Resorts, which includes Vermont’s Mount Snow in Dover.

Goldberg, Jay Peak’s receiver, was out of the country and could not be reached Thursday for comment.

Michael Goldberg, the court-appointed receiver for Jay Peak, speaks at a Statehouse news conference in April 2017.

In a court filing in June, Goldberg reported that Houlihan Lokey has been “actively marketing” Jay Peak to “potential strategic and financial buyers” in the United States, Europe and Asia.

He also reported that as of May, Houlihan Lokey had contacted 125 potential buyers, with 26 entering into non-disclosure agreements to review financial documents related to Jay Peak Resort. Goldberg did not reveal the names of any of the potential buyers.

Steven Wright, Jay Peak’s general manager, said Thursday that he doesn’t know much about the other entities that have visited the resort.

“It still feels like we’re in the early stages of this,” Wright said of the sale process.

Regarding Vail, Wright said, “Do you assume that because they haven’t yet shown interest, that there’s a lack of interest, or is there something more forward looking than that? I don’t really have an optic into that.”

He added, “We could take a phone call tomorrow where there’s interest from them or a new party.”

It’s not known what price Jay Peak will fetch on the open market, though it’s expected to be well shy of the amount needed to pay back the resort’s EB-5 investors in full. To do that, the sale price would need to be in the $200 million range.

The town of Jay has the resort assessed on the grand list at $124 million. The U.S. Securities and Exchange Commission, during a May 2016 court hearing, valued Jay Peak at $42 million, based on average profits.

The Timberline Cottages at Jay Peak Resort on June 7.

According to separate civil lawsuits filed by the state and federal regulators in the spring of 2016, Ariel Quiros, then Jay Peak’s owner, and Bill Stenger, at the time the resort’s CEO and president, misused $200 million of investor funds raised through the EB-5 program.

The investments were to pay for massive upgrades at Jay Peak and additional projects in other communities in northern Vermont, including a hotel and conference center at Burke Mountain ski area as well as a proposed biomedical facility in Newport.

Stenger and Quiros have since reached monetary settlements in those civil actions, neither admitting or denying the allegations against them.

This May, both Quiros and Stenger, as well as two of their associates, were indicted by a federal grand jury in Vermont on criminal charges including fraud and making false statements to the government in connection with a separate EB-5 project.

The sale of Burke Mountain ski area and its hotel and conference center is on “indefinite hold,” Goldberg has written in previous court filings.

That’s because, according to Goldberg, that ski area continues to lose money and has failed to generate the required jobs needed for EB-5 immigrant investors to obtain the U.S. residency they hoped for when they each put $500,000 into building a hotel there.