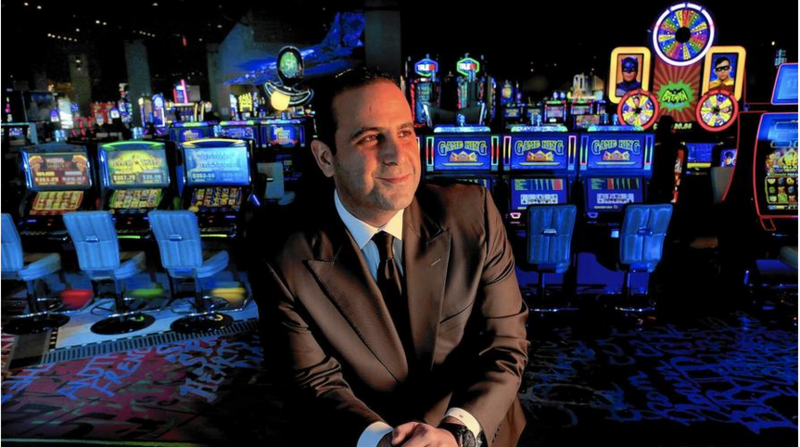 Sam Nazarian made his name and his billion-dollar fortune creating L.A. clubs and restaurants that attracted the hippest young celebrities.

He parlayed that fame into hotels in Beverly Hills and Miami's South Beach. This year, he looked to Las Vegas as the next step in a bold global expansion, opening the 1,600-room SLS Las Vegas hotel and casino in August.

Then he ran into the Nevada Gaming Control Board.

The board's routine vetting of Nazarian, who applied for a gaming license, has now thrown his Vegas plans into disarray. Investigators unearthed recent cocaine use — along with about $3 million in payments to a felon with convictions for drug possession and money laundering. Some of the money was paid to a convicted racketeer and Death Row Records founder Suge Knight.

Nazarian characterized the payments as extortion. On Tuesday, he relinquished all control of his Las Vegas hotel to his principal investor, Stockbridge Capital.

"We have made a collective decision to change the operating structure for the property," Stockbridge Executive Managing Director Terry Fancher said in a written statement.

Fancher now oversees all hotel operations; Nazarian is out as chief executive.

Nazarian is the premier night-life entrepreneur in Los Angeles. He presides over 51 restaurants, including the Umami and Katsuya chains, 17 nightclubs and six boutique hotels across the U.S. An additional eight SLS hotels are slated to open by 2016, including locations in New York, the Bahamas and Beijing.

The boyish billionaire had gone all-in on Vegas, even relocating there about three years ago as he planned his casino. He moved into an $8.5-million, 14,000-square-foot mansion overlooking the Strip.

"One of the main reasons I moved here … was to get out of a certain lifestyle I was around," he told the gaming board, as members grilled him about his cocaine use.

He plans to keep his 10% stake in the Vegas hotel and to continue pursuing a gaming license. The matter comes before the Nevada Gaming Commission, which oversees the board, on Thursday.

State law requires anyone with more than a 5% stake in a casino to hold a license. Nazarian declined to be interviewed by The Times.

The night-life entrepreneur has struggled for eight years to turn the former Sahara Hotel into a desert hot spot, an anchor for the redevelopment of the Strip's northern end.

Nazarian's troubles provide vivid insights into gaming board investigations of prospective casino owners in Las Vegas, a city that has struggled to clean up its image ever since its founding by mobsters. Nevada regulators dig into applicants' backgrounds as if they were nominees for high public office. 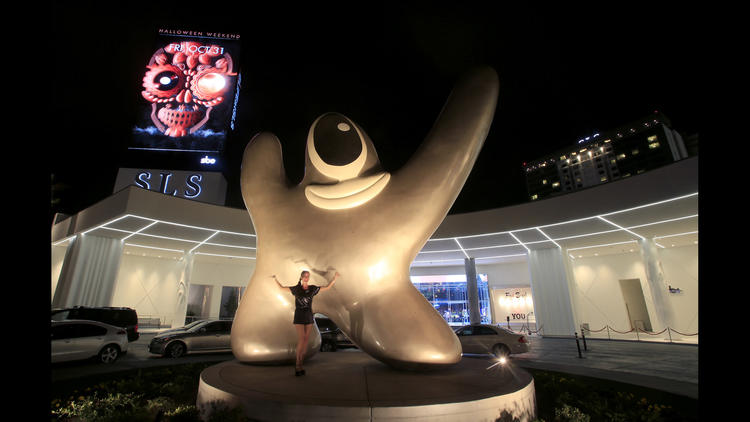 The licenses are rarely granted, and only after months of scrutiny by gaming control agents — conducted at the applicant's expense, sometimes costing millions of dollars. In the last year, only one non-restricted license has been granted in the state.

"It is one of the worst things you can ever go through," said commission member Joseph W. Brown. "Your soul is bared to the world."

The details of Nazarian's drug use and payments to felons were picked apart in a three-hour hearing two weeks ago in Carson City, Nev., before the board's three members and the state's deputy attorney general.

Nazarian initially told investigators that he had used drugs only in the distant past. But then he failed a drug test administered by the board.

At the hearing, he admitted that he had used cocaine recently.

Flanked by attorneys, Nazarian told the board that his recent drug use was "a bad indiscretion" and "a mistake" but insisted the episode was isolated to a single instance when he was attending a golf tournament in Mexico.

The initial denial irritated board members.

"We have the one issue of whether there was drug use, but then we had an additional issue of the degree to which you are speaking candidly and truthfully about it," board member Terry Johnson said.

The investigation also turned up long-standing ties to twice-convicted felon Derrick "Smokey" Armstrong, the man he accuses of blackmail.

Armstrong, a 43-year-old former West Los Angeles exotic car customizer, denied any wrongdoing in an interview with The Times. He called himself Nazarian's business partner and "fixer."

Nazarian acknowledged that he had made payments to Armstrong, who was convicted of drug possession in 1992 and pleaded guilty to money laundering in 2010. Nazarian, now 39, said he met Armstrong in 1999 and began paying him to customize his exotic cars.

The relationship soured after Armstrong borrowed money to open a car shop, Nazarian said at the hearing, and then threatened to harm or embarrass Nazarian unless he paid Armstrong another $1 million.

Nazarian, who is 6 feet 4, said he was "scared and embarrassed" and reported the threats to the Los Angeles Police Department starting in 2005.

But he kept making payments through 2013, Nazarian told the board.

One member of Nazarian's legal team dismissed Armstrong as a "parasite" common in the entertainment world.

"My city … is a city of barnacles for people who are achievers and high profile," attorney Joseph Taylor told the board. "The hangers-on, the clingers, the parasites — they are everywhere."

Nazarian told the board that Armstrong threatened repeatedly to embarrass him, disrupt pending business deals or physically harm him or members of his family.

One threat occurred the day of the grand opening of the SLS South Beach hotel, Nazarian said at the hearing: "[Armstrong] understood the mere fact that I had known him or associated with him was enough to garner bad press."

Armstrong, in an interview with The Times, said he received as much as $800,000 for work he did on behalf of Nazarian, including negotiating a deal to partner Nazarian with an energy drink producer. He denied threatening Nazarian.

"These allegations of extortion and being fearful are a bunch of lies," Armstrong said.

Dana Cole, a Los Angeles attorney who has represented Armstrong, said he helped Armstrong negotiate a settlement of a business dispute with Nazarian regarding a car business. It was not an extortion attempt, he said.

The payments included $90,000 to Knight and $83,000 to Hai Waknine, the convicted racketeer — both of whom, Nazarian told the board, were working with Armstrong.

Waknine served five years in federal prison after pleading guilty to one count of racketeering in connection with a money-laundering scheme linked to Israeli organized crime. Waknine could not be reached for comment.

"So roughly $3 million in monies … were paid either to Mr. Armstrong or to others, I guess it would be fair to say, in connection with Mr. Armstrong?" board member Johnson asked Nazarian during the hearing.

"It would be fair to say," Nazarian answered.

Knight declined to comment. But a business associate, entertainment producer Mark Blankenship, called the charges of extortion "a form of profiling and racism."

The gaming board has serious concerns about prospective casino owners using drugs or consorting with felons, said Brown, a commission member since 2008 and a director of the law firm Fennemore Craig Jones Vargas. "It's big," he said. "It's major."

Veteran Las Vegas attorney Dominic Gentile said the gaming control board is rigorous in its investigations and insisted Nazarian is "not being singled out. This goes on no matter who it is."

In 1963, Frank Sinatra, then owner of Lake Tahoe's Cal Neva Casino, lost his license over his acquaintance with mobster Sam Giancana. Sinatra was approved for a new license 17 years later, only after friends Gregory Peck and Kirk Douglas spoke on his behalf.

Gentile added that many upstanding Nevada citizens — including himself — might have difficulty passing gaming commission muster.

"If you've lived any kind of life, and you've enjoyed it, there's a damn good chance you're not eligible," he said. "Let's just say that if you have a lot of money, but you've chosen to associate with people that have reputations and perhaps are notorious, it's going to be tough."