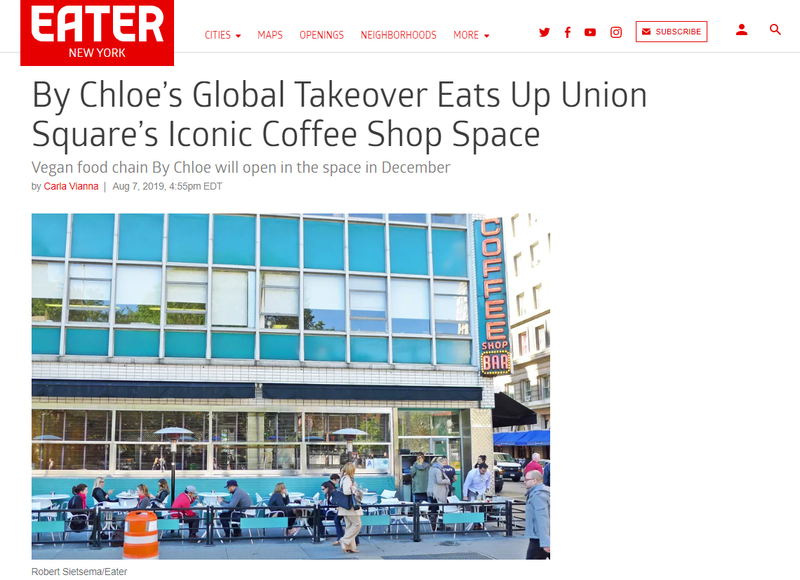 The Union Square space once home to New York institution Coffee Shop is now being filled by Instagrammable vegan chain By Chloe.

People mourned when the Brazilian-influenced diner closed last year; besides repeatedly appearing on Sex and the City, it was a neighborhood icon that stuck around for nearly 30 years despite growing real estate prices. Overall the space is being split into four new retail spaces, one of which will go to a Chase Bank and another to By Chloe, which plans to move into the space at 27 Union Square West in December.

By Chloe is the fast-casual play for hospitality titan ESquared. Its popularity and the recent era of fast-casual dining has allowed the vegan food chain to make ambitious expansion plans, fueled by the $31 million it received from various investment groups last year. Last week, By Chloe opened a new shop with digital menu boards and self-ordering kiosks at 1385 Broadway, and in October, another restaurant will open at 54th Street and Lexington Avenue. The latter will be By Chloe’s first takeout only location.

At the Coffee Shop space, the interior will pay homage to the nostalgic diner by including “intimate round banquette seating” and “a nod” to the restaurant’s original neon sign, according to By Chloe marketing material.

But its a move that still may not sit well with longtime fans of Coffee Shop. The restaurant was a nostalgic, distinctively New York place, while By Chloe is part of a huge company that’s in part flourished due to colorful food and spaces made specifically with social media marketing in mind.

By Chloe’s NYC openings are part of the brand’s larger international takeover. The company has plans to open 20 new locations across the country as well as in Europe, Canada, and the Middle East. In September, it’ll open in Toronto with a menu inspired by Canadian classics.