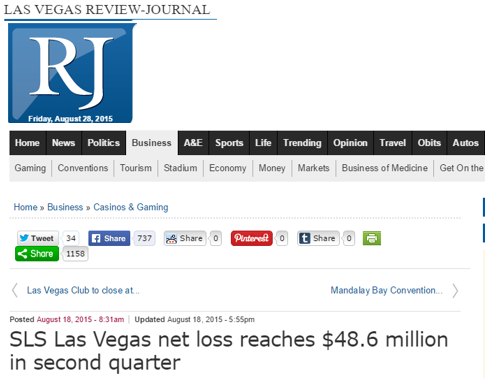 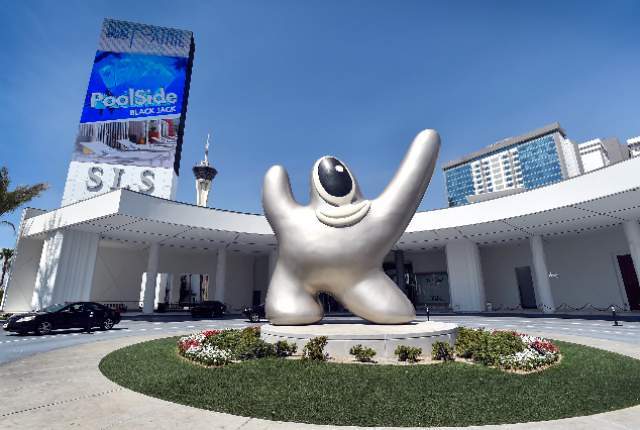 Stockbridge/SBE Investment Co., which owns the Strip resort, said in the filing with the Securities and Exchange Commission that the SLS has "has incurred net losses and negative operating cash flows for the six months ended June 30."

San Francisco-based Stockbridge Capital Partners, the private equity firm that owns 90 percent of the company, said it has funded capital contributions to the hotel-casino totaling more than $28.1 million through June 30.

According to the SEC filing, after the quarter ended, Stockbridge made three additional capital contributions to the SLS Las Vegas to fund operations between July 9 and Aug. 6, totaling $13 million.

Stockbridge said in the SEC filing it intends to provide SLS Las Vegas with "sufficient funds" through Dec. 31 to meet the property's obligations.

"(Stockbridge/SBE Investment) has initiated certain actions to increase revenues and reduce expenses in order to improve the results of operations, and the company intends to initiate further actions in 2015 to improve profitability of (SLS Las Vegas)," Stockbridge said in the SEC filing. "However, there can be no assurance that such actions will be effective."

SLS Las Vegas opened a year ago as a $415 million renovation of the former Rat Pack-era Sahara, which closed in 2011.

SLS President Scott Kreeger said Stockbridge was committed to the "long haul" future of the resort.

He said the biggest challenge still facing the resort is its isolated the north Strip location. Kreeger said construction of the Luck Dragon Casino on Sahara Boulevard will help drive additional customer traffic to the area.

"There are some fundamental business model changes we need to make on the property," Kreeger said. "We have plans in place and we're moving forward."

He said the SLS managers plan to turn the Life nightclub into a live music venue and are bringing in a third-party operator to manage the facility. Also, the he said the second floor buffet area, which closed last year, is being looked at for additional meeting space.

Property operators hoped May's Rock in Rio music festival — held on grounds across the Strip from the resort — would have provided a boost in quarterly results. However, net revenue declined slightly between the second and first quarter while the net loss grew from $35.3 million in the first quarter.

"We think it brought people through and introduced them to the property," Kreeger said.

In the SEC quarterly filing, Stockbridge/SBE said total revenue between April and June was $36.9 million, which included $9.5 million in casino revenue, $13.1 million in hotel revenue, and $16 million in food and beverage revenue.

Stockbridge/SBE said hotel revenue benefited from the property's listing within the Hilton Worldwide Holdings as part of the Curio Collection. Kreeger said the property is looking at other hotel partners to help drive increased room reservations.

Los Angeles-based nightclub operator SBE Entertainment owns the other 10 percent of the SLS.