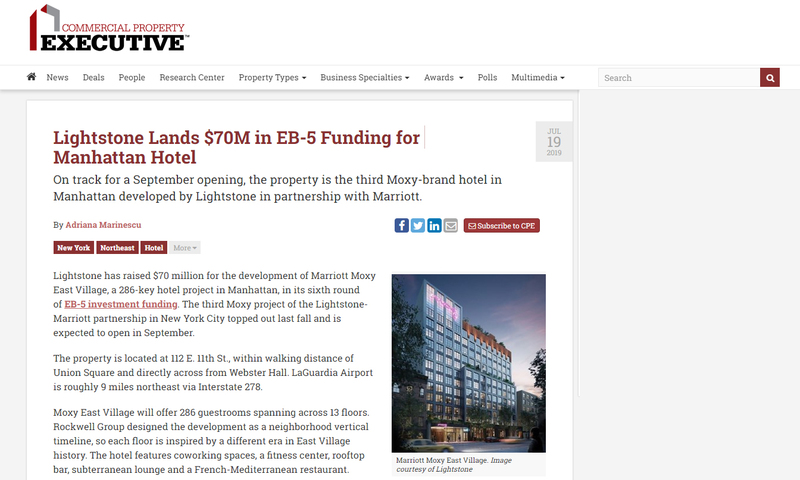 On track for a September opening, the property is the third Moxy-brand hotel in Manhattan developed by Lightstone in partnership with Marriott.

Lightstone has raised $70 million for the development of Marriott Moxy East Village, a 286-key hotel project in Manhattan, in its sixth round of EB-5 investment funding. The third Moxy project of the Lightstone-Marriott partnership in New York City topped out last fall and is expected to open in September.

The property is located at 112 E. 11th St., within walking distance of Union Square and directly across from Webster Hall. LaGuardia Airport is roughly 9 miles northeast via Interstate 278.

Moxy East Village will offer 286 guestrooms spanning across 13 floors. Rockwell Group designed the development as a neighborhood vertical timeline, so each floor is inspired by a different era in East Village history. The hotel features coworking spaces, a fitness center, a rooftop bar, a subterranean lounge, and a French-Mediterranean restaurant.

The joint venture’s portfolio also includes Moxy Times Square, which opened in 2017, and Moxy Chelsea, which topped out in March 2018 and opened earlier this year. The properties received a total of $133 million in financing through the Lightstone EB-5 platform. Other current developments feature two new Moxy hotels in New York City and several others in South Beach, Miami, and downtown Los Angeles.