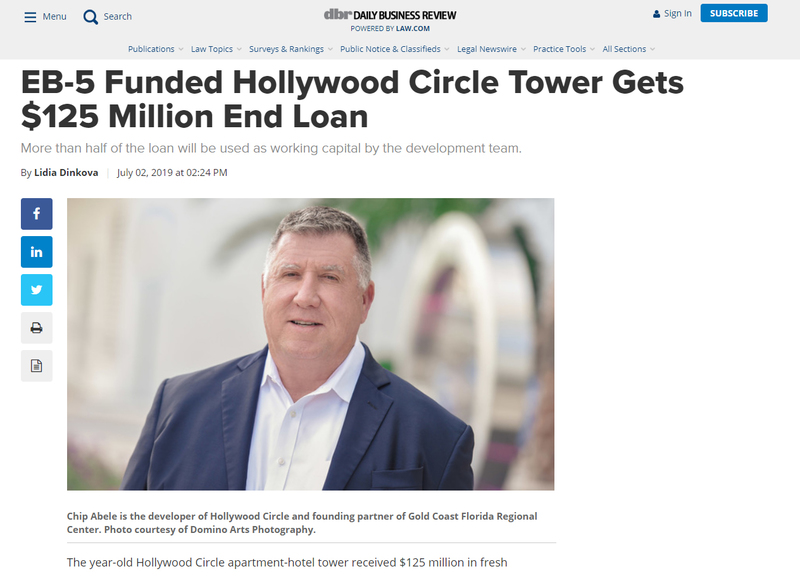 More than half of the loan will be used as working capital by the development team.

The year-old Hollywood Circle apartment-hotel tower received $125 million in fresh financing. After the construction loan has been paid off, the financing leaves the development team with $65 million of working capital.

Developers, led by Charles Abele Jr., closed on the loan June 18. He didn’t elaborate on how he and his development partners will use the working capital, only allowing that new investments could be one of the options.

“We are in the real estate business, and we have it on hand to do a number of things, property investments for the company. We could use it for a number of purposes,” he said.

The developers secured a $60 million construction loan, which was paid off with the latest financing, to help pay for the project.

he federal EB-5 visa program allows foreigners who invest a minimum of $500,000 in a U.S. commercial venture that creates at least 10 jobs to get green cards for themselves and their families.

Abele, a prolific South Florida developer, and his development partners solicit their own EB-5 investments through their Gold Coast Florida Regional Center. Abele founded it in 2009 as a way to help finance his real estate projects.

Abele’s Gold Coast center is a novel approach to EB-5 since it finances only its own projects. Most  centers are conduits that connect foreign investors with U.S. projects. U.S. Citizenship and Immigration Services approves and oversees the centers.

EB-5 has been around for some time, but it wasn’t heavily used until the real estate market started emerging from the Great Recession and developers started looking for alternative sources of financing. Since then, it’s become a bountiful source of financing for South Florida real estate.

“We were among the first people to use EB-5. At the time we formed our regional center, there was only 50 or 60 regional centers that had been formed in the 20 years prior to that. Three years later, it was 1,000,” Abele said. “It really kind of blew up.”

Abele, who is CEO and chairman of the center, leads it with managing directors Jose Boschetti, Peter Jago, Don McCarthy and Harish Mehta.

The Hollywood Circle project, which sits on 3.2 acres along the northeast side of Young Circle Park in downtown Hollywood, has the 386 CIRC Residences apartments and the 111-room CIRC Hotel.

CIRC Residences has a ninth-floor amenity deck with a swimming pool, club room and health club. CIRC Hotel, which is managed by Coral Gables-based hotel operator Trust Hospitality, has a recreation deck on the 12th story that includes a swimming pool and the Muse Rooftop Bar & Lounge. The Olivia Restaurant & Bar is in the hotel’s lobby.

Hollywood Circle is one building that varies in height with 11 stories on one side, 21 stories on the other and 25 stories at its peak.

The property also has a five-story garage with 941 spaces, a 47,604-square-foot Publix and 13,242 square feet of additional retail space where a spa, an AT&T store and a UPS store will open.