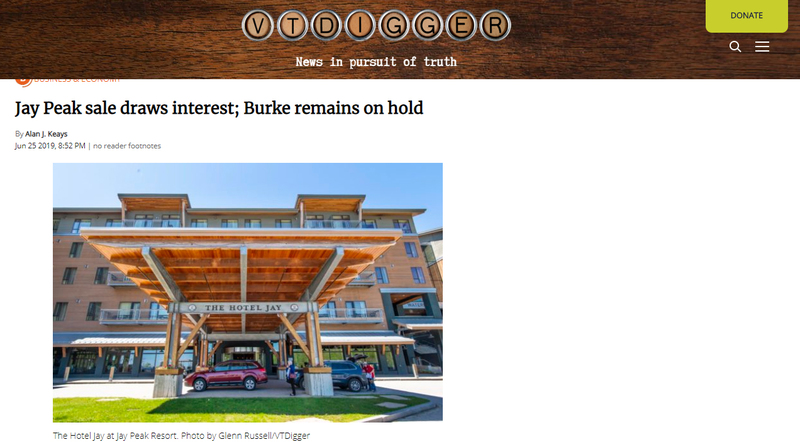 More than two dozen entities have expressed interest in reviewing the financials of Jay Peak as the man in charge of running it seeks to sell it to recoup money for defrauded investors in massive projects at the northern Vermont ski resort.

The sale of another Northeast Kingdom ski area tied to the EB-5 investment scandal, Burke Mountain, remains on hold as that resort continues to lose money.

That’s the upshot from a recent filing by Michael Goldberg, the court-appointed receiver now overseeing both resorts, in his latest report on the status of each.

Goldberg was appointed the receiver more than three years ago in a case that {last month led to the indictment of four people, including Jay Peak’s former owner, Ariel Quiros, and the resort’s former president, Bill Stenger.

The receiver says he is pressing ahead to sell Jay Peak.

Goldberg earlier this year hired Houlihan Lokey Inc., an investment banking and financial services firm headquartered in Los Angeles to assist with the sale of the resort.

In a recent update on the resort posted to the receiver’s website, jaypeakreceivership.com, Goldberg reported that Houlihan Lokey has been “actively marketing” Jay Peak to “potential strategic and financial buyers” in the United States, Europe and Asia.

VTDigger's business coverage is underwritten by:

The receiver does not name any of the entities who have expressed interest in the resort, and he could not be reached Tuesday for comment.

“The Receiver is hopeful that a buyer can be located and a sales process can be concluded in 2019,” the filing stated.

“The Receiver is not sure of what price the Jay Peak Resort will ultimately sell for,” the filing added, “but it is highly doubtful that it will sell for a price sufficient to pay the Jay Peak investors in full.”

That would take a sale price in the range of more than $200 million. The town of Jay has the resort valued on its grand list at $124 million. The U.S. Securities and Exchange Commission valued the Jay Peak resort at $42 million, based on average profits, in a May 2016 court hearing.

“The Receiver and his professionals will do their best to obtain the highest possible price for the resort by conducting a vigorous and fully transparent sales process,” according to Goldberg’s report.

The proceeds of the sale of the resort, subject to the approval of the court, will be distributed on a “pro-rata basis” to EB-5 immigrant investors in the upgrades at the resort who have not yet been paid back their $500,000 investments.

According the separate civil lawsuits filed by the state and federal regulators more three years ago, Quiros and Stenger misused $200 million of investor funds raised through the EB-5 program.

The investments were to pay for massive upgrades at Jay Peak and additional projects in other communities in northern Vermont, including a hotel and conference center at Burke Mountain ski area as well as a proposed biomedical facility in Newport.

And last month, Quiros and Stenger, as well as Bill Kelly, a key adviser to Quiros, and Jong Weon (Alex) Choi, were all indicted by a federal grand jury in Vermont on criminal charges including fraud and making false statements to the government in connection with a separate EB-5 project.

The charges stem from a failed biomedical research facility, AnC Bio Vermont, proposed for Newport that authorities said was “nearly a complete fraud.”

In his recent report, Goldberg wrote that sale of Burke Mountain ski area and its hotel and conference center remain on “indefinite hold.”

That’s because, according to the filing, the ski area continues to lose money and has failed to generate the required jobs needed for EB-5 immigrant investors to obtain the U.S. residency they hoped for when they each put $500,000 into building a hotel there.

“The fact that the Burke Hotel is operating at a loss will have a concomitant effect on its value,” Goldberg wrote in a footnote to his report.

“Although an appraisal has not been undertaken,” he added, “the Receiver currently believes that the Burke Hotel would sell for substantially less than is owed to (the Burke) investors.”

At Burke, Stenger and Quiros raised $60.5 million from 121 EB-5 investors for the construction of the hotel and conference center.