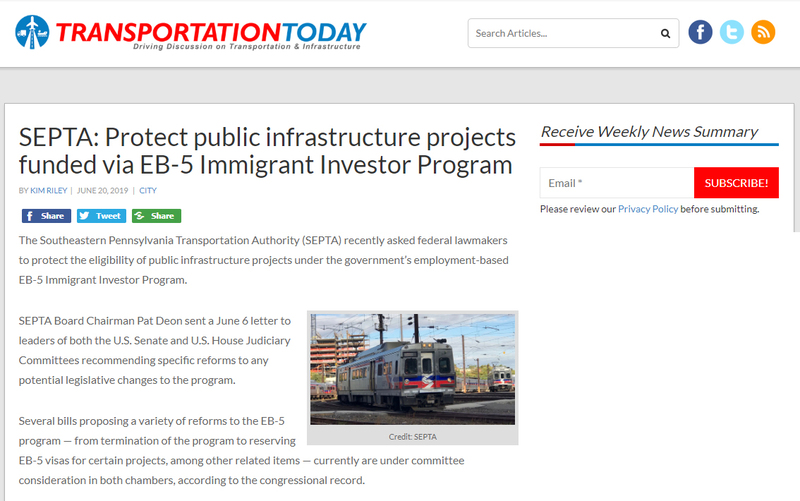 SEPTA Board Chairman Pat Deon sent a June 6 letter to leaders of both the U.S. Senate and U.S. House Judiciary Committees recommending specific reforms to any potential legislative changes to the program.

Several bills proposing a variety of reforms to the EB-5 program — from termination of the program to reserving EB-5 visas for certain projects, among other related items — currently are under committee consideration in both chambers, according to the congressional record.

“SEPTA has always supported legitimate reforms of the EB-5 Immigrant Investor Program and will continue to do so for the term of the program,” Deon wrote. “However, we are concerned that public infrastructure has not been adequately represented in current EB-5 reform initiatives.”

Congress created the EB-5 program in 1990 to stimulate the U.S. economy through job creation and capital investment by foreign investors. In 1992, Congress created the EB-5 Immigrant Investor Program, also known as the Regional Center Program, to set aside EB-5 visas for participants who invest in commercial enterprises associated with regional centers approved by U.S. Citizenship and Immigration Services (USCIS).

Under the program, eligible immigrant investors may become lawful permanent U.S. residents when they invest certain funding amounts to finance an American business that will employ at least 10 American workers. Applicants may invest individually or as part of a larger investor pool, or regional center.

The USCIS, which administers the EB-5 program based on proposals for promoting economic growth, estimates that there has been $20 billion in EB-5 capital investment from fiscal year 2008 through FY 2017.

Thus far, SEPTA has used $237 million of that total and created more than 5,000 jobs, “saving tens of millions in interest costs for the taxpayer,” wrote Deon.

Deon also suggested that several provisions from previous bill drafts be included in any potential changes to the program, including proposed amendments to designations for targeted employment areas (TEA) — which are a rural area or area with high unemployment.

Additionally, possible reform legislation for the program should include measures to strengthen national security and fraud deterrence, as well as meaningful increases to the investment amounts, among other suggested provisions, wrote Deon.