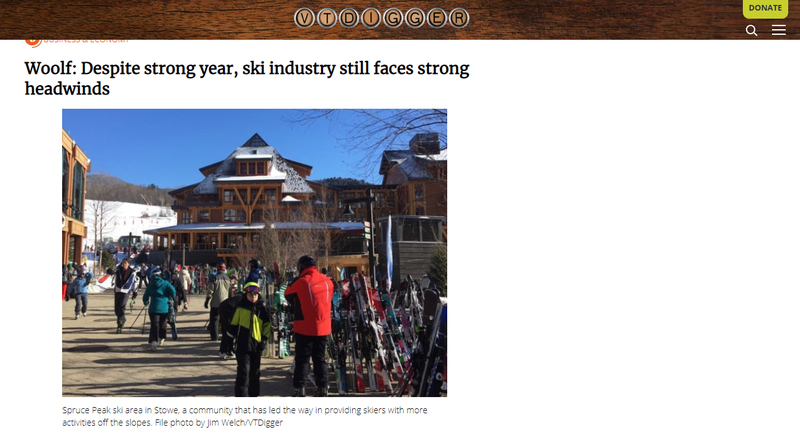 Spruce Peak ski area in Stowe, a community that has led the way in providing skiers with more activities off the slopes.

The Vermont ski industry reported that the 2018-19 ski season was a good one. It had better have been, given that last winter was one of the snowiest in the last half century. The Vermont Ski Areas Association reports nearly 4.2 million skier visits — one person skiing or riding for one day.

That's the third consecutive year of growth, and skier visits were up nearly one-third from the dismal 2015-16 season, which had one of the lowest snowfalls of the past 60 years.

But a closer look at the long-term record shows that the ski industry, and Vermont’s winter tourism economy, has a lot to be concerned about. Outside of a few very good years (and a couple of really bad ones) Vermont’s ski industry has been flat since the mid-1980s. In the industry’s heady days of the 1960s through the early 1980s, skier visits quadrupled, from just over 1 million visits in 1964 to 4 million in 1982.

That means only 200,000 more skiers in 2019 than 37 years earlier. There aren’t many businesses that could survive with such a low growth rate, unless they had something else to offer. It’s that something else that has led to the expansion of the industry over the past four decades.

One of those is real estate. A combination of rising wealth and Vermont’s proximity to major population centers in the Northeast has boosted the number of ski homes, which has helped the industry grow financially.

A second is technology. Better and more efficient snowmaking equipment has helped them improve conditions on the slopes and deal with unfavorable weather.

Another is providing skiers — and the non-skiers who accompany them — with more activities. One of the most popular activities that vacationers enjoy, and want to have, is shopping and dining. Along with that is using their major asset — the mountain and lift — in other seasons, especially summer.

Stowe is the primary success story in that regard, but many areas, such as Jay Peak, despite its ill-fated EB-5 scandals, have attempted to expand what they have to offer by building shops and restaurants, swimming pools, and mountain bike trails that can be enjoyed in more than one season. Those also make owning a vacation home onsite more valuable.

Still, the fact remains that the number of people skiing and riding hasn’t changed much in more than 35 years. And the ski industry faces lots more competition today than it did in the 1970s. Then, skiing was a relatively new sport to most Americans and there was lots of room for growth. Americans’ incomes were a lot lower and a driving vacation from Boston or New York or Philadelphia to Vermont was an affordable option for middle and upper middle class families.

Today, flying from those cities to Colorado or Utah is well within financial reach of middle class families. As is a winter trip to Florida or a Caribbean cruise to get a respite from northeast winters. The ski industry faces a lot more competition than it did in the past. Ski areas must compete on price, amenities, and a host of other factors when they are trying to reach out to potential customers.

The low single digit growth rates the ski industry has become accustomed to is probably the best it can hope for in the future. That means its future success will be based on a lot more than attracting more people to the slopes.