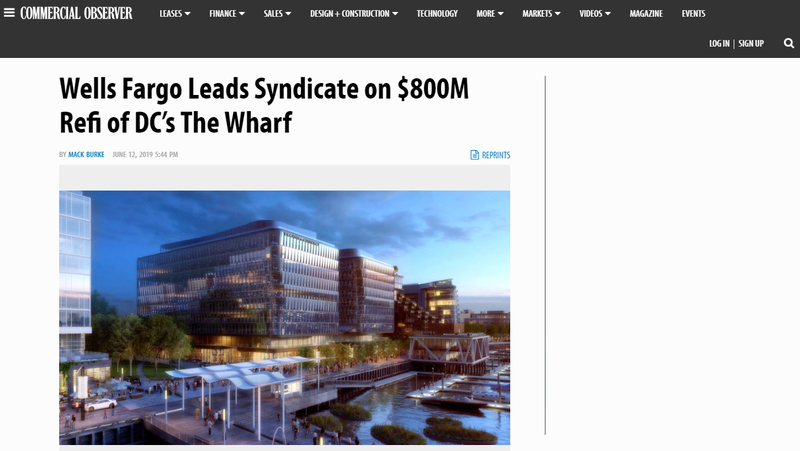 RENDERING OF ONE BUILDING AS PART OF THE WHARF PHASE 2.

A consortium of banks led by Wells Fargo has provided $800 million to a joint venture by the name of Hoffman-Madison Waterfront (HMW) to refinance debt on the first phase of its $2.5-billion-dollar Washington, D.C., waterfront development, The Wharf, the borrowers announced this week.

Morgan Stanley and Blackstone, with other unnamed lenders, were involved in the banking syndicate.

The Wharf’s co-developers, Madison Marquette and PN Hoffman, along with their equity partner, the Public Sector Pension Investment Board, make up the HMW joint venture borrowing party.

The four-year term loan includes extension options and refinances construction debt on The Wharf’s first phase, excluding two parcels with EB-5 financing, according to information from the borrowers. The remaining proceeds will go toward the development’s second phase, which is currently in the works.

It’s unclear how much debt each bank contributed to the total or which other lenders were involved in the financing as a spokeswoman for the developers did not provide information on it. Representatives for Wells Fargo did not immediately respond to a request for comment.

The development’s official address is at 1100 Main Avenue SW in D.C., on the Potomac River waterfront. Madison Marquette and PN Hoffman, broke ground on the second phase of the massive 3.5-million-square-foot neighborhood earlier this year.

The developers announced the completion of the 2.2-million-square-foot first phase in October 2017.

Overall, The Wharf has 2,600 parking spaces and includes 550 boat slips across four public piers, according its website. That’s all situated on a mile-long stretch along the Potomac River.

It also gives guests and residents the option of a water taxi provided by the Potomac Riverboat Company that offers 25-minute routes to and from Alexandria, Va. for D.C. commuters.

In December 2018, law firm Williams & Connolly signed a 15-year lease to occupy close to 300,000 square feet of office space across two buildings in the project’s second phase, as CO previously reported. The firm, which was the first tenant to sign on for office space at Phase 2, will move into conjoined 12-story towers at 690 Main Avenue SW in 2022.

Also in December, Knead Hospitality + Design announced that it will open a second restaurant at The Wharf, signing a lease on Dec. 10 to open The Grill, an upscale American restaurant on the waterfront, as CO exclusively reported. The 5,400-square-foot eatery is expected to open in the fall this year at the base of an office building at 99 Market Square SW.