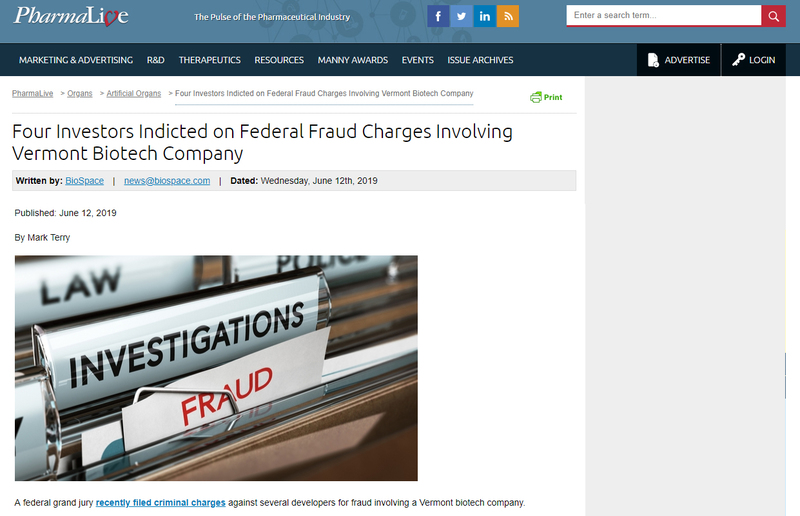 The developers include Ariel Quiros and Bill Stenger, formerly with Jay Peak, a development firm, Quiros advisor William Kelly and a South Korean businessman, Jong Weon Choi. The indictment revolves around several investment projects including the development of a biotech company, AnC Bio Vermont, in Newport, Vermont, and the government’s EB-5 program, which offers permanent U.S. residency in exchange for $500,000 investments in approved businesses that will create specific numbers of jobs.

In 2015, Stenger held a ceremony announcing the project, which would be “one of the most impressive technology buildings in all of Vermont, and to be quite honest with you, all of the United States.”

AnC Bio Vermont was to manufacture drugs, artificial organs and rent space to other biotech companies. The federal indictments were delivered three years after the U.S. Securities and Exchange Commission and the state of Vermont filed civil fraud charges against Quiros and Stenger.

According to VTDigger, both Quiros and Stenger pleaded not guilty. Quiros claimed that Vermont had “unclean hands” and his attorneys would reportedly expose government officials’ involvement in the scheme. A lawsuit by investors also alleges the state failed to do enough to stop the fraud.

The scam began in 2008. Quiros bought Jay Peak resort and ran it for eight years while he and Stenger sold investment shares in several projects, allegedly taking funds from one project to pay for previous projects—a classic Ponzi scheme.

The SEC claims that Quiros stole $50 million from about $450 million of the funds raised for his personal use, including paying off debts and buying a condominium in New York City. Quiros is a Miami businessman who bought Jay Peak and later Burke Mountain, a Vermont ski resort. He has denied the charges.

Reportedly, the men behind the scheme raised $93 million from about 169 investors for AnC Bio Vermont, which was never built. The indictment states that the final designs were never completed and most of the money was embezzled or used to pay off other debts.

Quiros, Stenger and Kelly were arraigned in U.S. District Court in Burlington.

At the indictment, U.S. Attorney Christina Nolan told reporters that the Vermont project was advertised by the developers as a way to bring “much-needed jobs to the Northeast Kingdom. But the defendant lied, and they cheated. According to the grand jury’s indictment, the AnC Vermont project was not in fact designed to create the number of jobs or the amount of revenue for the Northeast Kingdom that the defendants claimed. Rather, the project was designed to siphon millions of dollars to Quiros and Choi.”

Choi was not present and is, according to Nolan, currently at-large.

The proposed AnC Bio Vermont was to cost $110 million. The project, according to VTDigger, “was a carbon copy of a Korean company, AnC Bio Korean, which was at the center of an investor fraud scheme in South Korea.” Reportedly the Seoul, SK-based biotech company actually had a building constructed in an office park and was registered in the country’s business registry, but there were no employees and no laboratory or drug manufacturing equipment.

According to the indictment, Quiros handled the money and made final decisions, Kelly was a “key advisor” to Quiros, and Choi was a hidden partner who created the business plan. Stenger, according to Vermont Public Radio (VPR), “served as the public face, to win over investors and politicians, and in doing that work ‘presented a variety of false and fraudulent statements’ to investors and regulators.”

In the indictment, investor materials indicated there was a $40 million cost for “construction fit-out and equipment,” but $12 million went directly to Quiros and Choi. They also took $10 million out of the $16 million listed for “working capital.” As part of the scheme, Kelly was to receive $4 million and Stenger was to receive a “management fee” of $1 million.

The State of Vermont’s involvement also appears to be fuzzy. In June 2014, the Vermont EB-5 Regional Center, which is supposed to regulate EB-5 projects, ordered the defendants to stop work on the project and provide details about their financial plans. But, according to the indictment, by April 2015, the regional center let the defendants continue to raise money for the project.

The facility was reportedly going to manufacture and market three different artificial organs, including heart, kidney and liver. But, according to VPR, the artificial heart needed to be redesigned, “had no commercial market,” and the kidney and liver hadn’t been developed. None had been approved by the U.S. Food and Drug Administration (FDA).

Stenger’s attorney, Brooks McArthur, has worked hard to separate Stenger from the other defendants, declaring his innocence. McArthur told reporters, “Bill Stenger has lived in the Northeast Kingdom for 35 years. He has dedicated his life to the improvement of Vermont and the Northeast Kingdom. There is, in the strongest possible way we can say it, a denial that he engaged in any criminal activity at all.”

Asked later, McArthur said, “Was he negligent in his oversight of people he trusted? He’s admitted to that. But does that rise to the level of his involvement in a criminal fraud.”