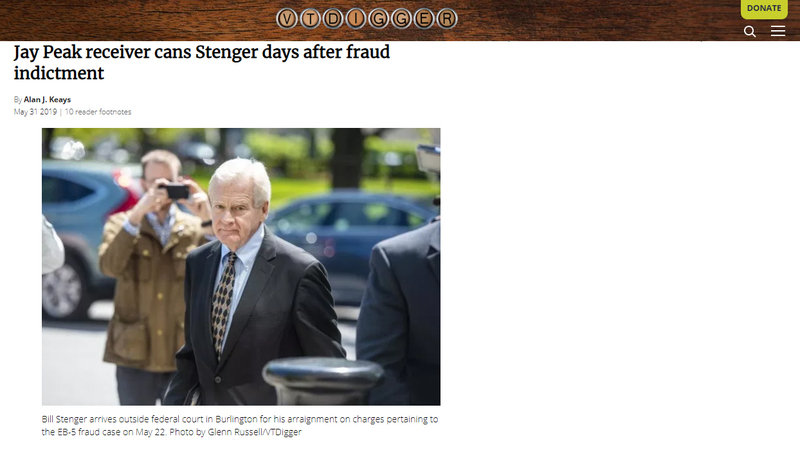 Bill Stenger has been fired from his job a consultant for the receiver overseeing Jay Peak and other properties at the center of the EB-5 investor fraud scandal.

The move Friday to can Stenger comes a little more than a week after Stenger was indicted by a federal grand jury on several counts, including wire fraud and making false statements regarding a failed biomedical research center proposed for Newport.

Michael Goldberg, the receiver overseeing the resort, announced Stenger’s termination with a posting on the Jay Peak Receivership website at 4:15 Friday afternoon.

“The Receiver stresses that Mr. Stenger’s termination should not be interpreted as an indication that the Receiver believes that William Stenger did anything wrong,” Goldberg wrote in that posting, “and, in fact, a forensic accounting performed by the Receiver’s professionals early in the case failed to uncover any funds wrongfully diverted to Mr. Stenger.”

Goldberg added, “The Receiver’s decision to terminate Mr. Stenger at this time is simply based on the Receiver’s opinion that it would not be appropriate to continue to retain Mr. Stenger in light of the recent indictment.”

The indictment handed down by the Vermont’s federal prosecutor, Christina Nolan, last week accused Stenger of being the pitch man for the projects despite being aware of the ongoing fraud. He’s also accused of plotting to take $1 million from money set aside for AnC Bio, a project that federal authorities previously called “nearly a complete fraud.”

Stenger, 70, of Newport, pleaded not guilty to the charges last week in federal court in Burlington and was released after posting a $100,000 appearance bond.

The lawsuit alleged the two men had misused $200 million of the more than $450 million they raised through the federal EB-5 immigrant investor program to finance several development projects in northern Vermont, including massive upgrades at Jay Peak.

Despite the filing of those lawsuits Goldberg kept Stenger on as a consultant for the resort, and Stenger was a frequent sight at both Jay Peak and nearby Burke Mountain, another ski area that had been owned by Quiros and where the developers raised EB-5 funds for a hotel project.

In September 2016, a few months after state regulators and the U.S. Securities and Exchange Commission leveled the civil lawsuits against Stenger and Quiros, Stenger reached a settlement to resolve his SEC case.

A day after that settlement, Goldberg announced that Stenger was no longer a Jay Peak employee, but would provide assistance to him on an “as-needed basis.”

In May 2017 when asked about Stenger’s role at the resorts, Goldberg referred to him as a consultant paid at a rate of $50 per hour.

“I want him here because he’s helping out and he’s doing it cheaper and it’s in the best interest of everybody because he knows more about it than anybody,” Goldberg said at that time.

In addition to the pay, Goldberg said at that time, Stenger had use of an older model Volvo belonging to Jay Peak. “That’s part of his compensation,” the receiver said then.

In closing his brief written statement online terminating Stenger, Goldberg wrote that Stenger was a “very valuable resource to him over the past few years and that he worked tirelessly to assist the Receiver in many aspects of administering the receivership.”

Goldberg added, “The Receiver wishes Bill Stenger and his family well in this difficult time.”