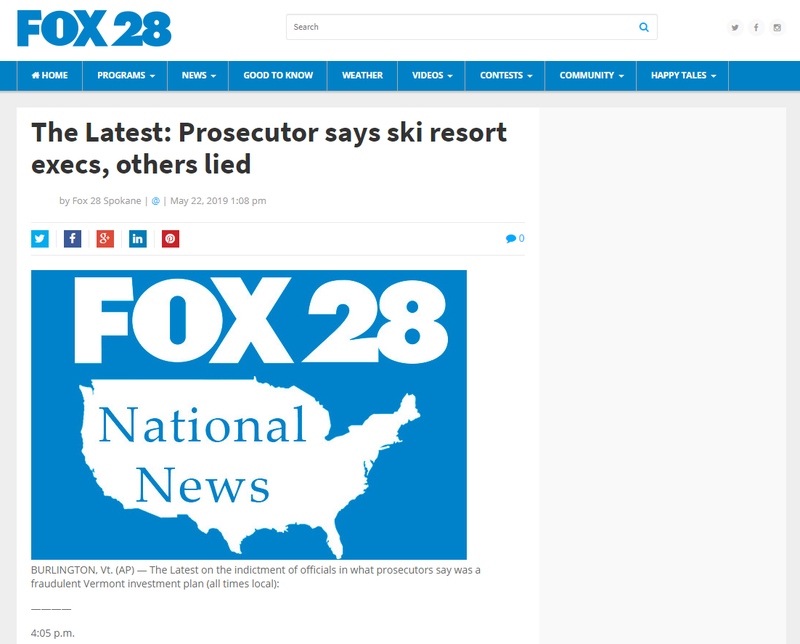 The Latest on the indictment of officials in what prosecutors say was a fraudulent Vermont investment plan (all times local):

U.S. Attorney Christina Nolan spoke Wednesday in Newport, hours after three of the four men indicted by a grand jury appeared in federal court in Burlington.

The indictments released Wednesday allege that Jay Peak’s former owner Ariel Quiros, of Florida; former president William Stenger, of Newport; Quiros’ adviser, William Kelly; and Jong Weon Choi, a businessman in South Korea, conspired to embezzle investors’ funds and deceive them about the number of jobs they would create.

Nolan says Choi is at large.

She spoke in Newport in front of an empty city block that had been purchased by the investors with the money prosecutors say was fraudulently obtained.

The former owner and former president of a Vermont ski resort accused in a multimillion-dollar fraud case have been indicted on multiple federal charges over a failed plan to build a biotech facility using foreign investors’ money.

The indictments allege that they conspired to embezzle investors’ funds and deceive them about the project’s number of jobs and its ability to generate revenue.

Quiros and Stenger were accused in 2016 of misusing more than $200 million raised from foreign investors through the EB-5 visa program.