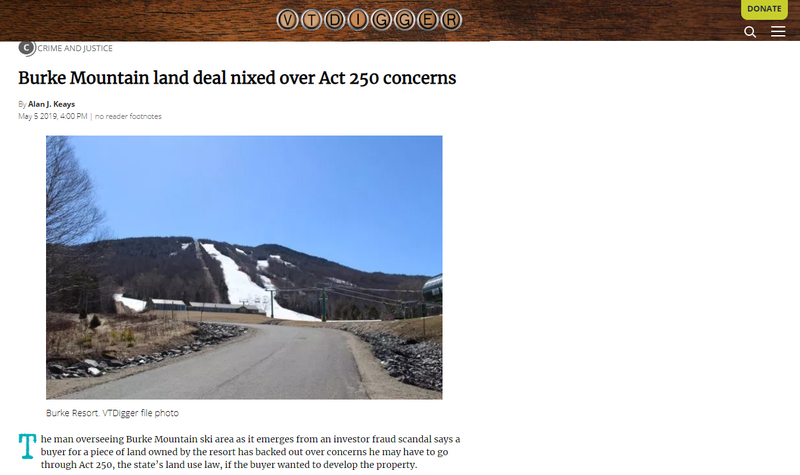 The man overseeing Burke Mountain ski area as it emerges from an investor fraud scandal says a buyer for a piece of land owned by the resort has backed out over concerns he may have to go through Act 250, the state’s land use law, if the buyer wanted to develop the property.

As a result, Michael Goldberg, the court-appointed receiver now in charge of the Northeast Kingdom ski area, says a new buyer has been found.

Goldberg, in a recent court filing, did state that the $135,000 purchase price for the nearly 20-acre parcel of land is still $10,000 more than the initial listing price for the property, deemed as not essential to the future of the ski resort.

Goldberg wrote in the filing that once that initial buyer discovered that he may have to go through Act 250, depending on development plans, that buyer then declined to go through with the purchase.

The receiver added in his filing that a new buyer has stepped forward, with the $135,100 offer for the land located along Route 114 in Burke.

“While Route 114 is a heavily traveled and often noisy road, this location has substantial frontage on the river and borders mountain bike and snowmobile trails,” the receiver wrote in a recent court filing.

“However,” he added, “Act 250 restricts the use of the properly, unless the buyer chooses to participate in the Act 250 permitting process.”

The property was one of several parcels, described as vacant, “undeveloped” land owned by the resort and “is not necessary for the operation of the Burke Resort.”

The land was purchased in 2005 by a prior owner of the resort who was considering creating a different access road leading to the resort as well as condominiums and a golf course. That proposal never went anywhere and nothing has happened with the property since.

Goldberg has since subdivided the property into four parcels, and has been working to sell them off.

“These sales will result in additional cash being deposited into the Receiver’s account, which is maintained for the purpose of ultimately satisfying claims filed by the investors and creditors,” according to a filing by Goldberg.

“Moreover,” Goldberg wrote, “these sales will reduce any additional costs to the receivership associated with maintaining this portion of the property.”

Goldberg has submitted a filing in federal court in Miami seeking a judge’s approval to sell the land at the lower price than initially expected.

Goldberg was appointed the receiver overseeing Burke in April 2016 after the U.S. Securities and Exchange Commission leveled a civil lawsuit against Ariel Quiros, the resort’s former owner, alleging he engaged in a “Ponzi-like” scheme to defraud EB-5 investors.

That SEC lawsuit as well as a separate one brought by state of Vermont regulators accused Quiros, who also owned Jay Peak ski resort in Vermont, and his past business partner, Bill Stenger, Jay Peak’s former president, of misusing $200 million they raised through the federal EB-5 immigrant investor program.

The lawsuits also alleged Quiros pocketed $50 million of that money, buying a luxury New York City condo and using some of the funds to pay his own taxes.

The two developers had been raising money for several years to fund massive upgrades at Jay Peak, as well as development projects in Vermont’s Northeast Kingdom, including the construction of a new hotel and conference center at Burke.

The two developers have since reached settlements in both the state and federal lawsuits, with neither admitting or denying wrongdoing. Quiros has agreed to pay more than $80 million in resolving both cases while Stenger is paying a total of $225,000.

Meanwhile, the receiver is in the process of selling off assets that Quiros agreed to surrender as part of the settlements, including the Jay Peak ski area, which is currently being marketed.

However, last year Goldberg said the sale of Burke Mountain is on indefinite hold.