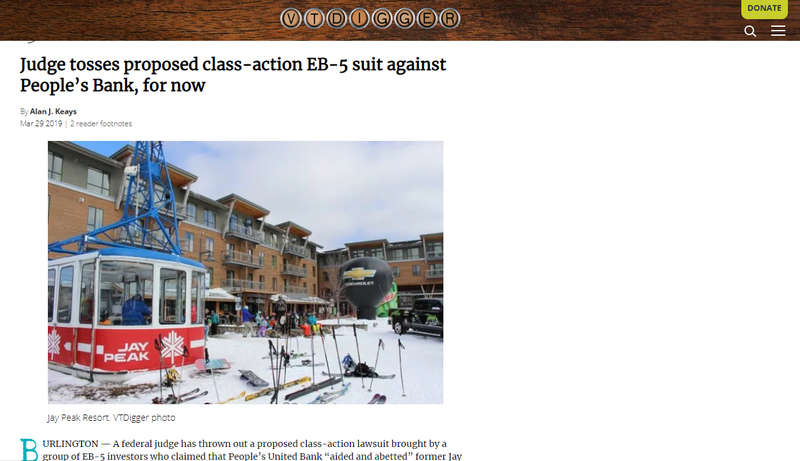 A federal judge has thrown out a proposed class-action lawsuit brought by a group of EB-5 investors who claimed that People’s United Bank “aided and abetted” former Jay Peak owner Ariel Quiros in an alleged scheme to defraud them.

Judge Christina Reiss made her ruling following a hearing that stretched over several hours Friday in federal court in Burlington. In tossing out the lawsuit, the judge did allow the attorneys for the investors 20 days to file an “amended complaint” in a bid to keep the case alive.

“I think some of these deficiencies can be corrected,” the judge said from the bench.

Throughout the hearing Friday, Reiss told those attorneys she had been struggling with the “generalized” nature of the allegations of the lawsuit.

The judge said she had trouble tying the claims in the filing to specific investors in the alleged fraud scheme and then determining what damages, if any, each may have suffered as a result.

The alleged fraud scheme spanned nearly a decade and involved a total of more than 800 investors over a series of eight development projects in Vermont’s Northeast Kingdom.

“I’m not convinced everybody has the same damages,” Reiss told the attorneys.

Harley Tropin, a lawyer for the investors, said after the hearing that he would be filing that amended complaint as directed by the judge.

“We’re going to proceed aggressively to get a result for the people,” he added.

During the hearing, Tropin told the judge he didn’t believe the lawsuit was “scattershot.”

Rather, he said, it was an account of investors who put $500,000 investments each into projects, and whose money was later commingled with funds from other investors in other projects” in a one, long Ponzi-like scheme.

Stricker during the hearing contended that while the lawsuit named People’s United Bank as a defendant, the real target of the investors’ claims was Quiros, who had not been named as a defendant.

“Quiros is generally viewed at the baddest of the bad guys here,” Stricker said in court.

The proposed class-action lawsuit named seven investors as plaintiffs, accusing People’s United Bank of allowing Quiros to use funds that had been held in escrow accounts for certain resort development projects to be used to purchase the ski resort.

The lawsuit alleges that the bank “aided and abetted, encouraged, and rendered substantial assistance” to Quiros, and his then-business partner, Bill Stenger, Jay Peak’s former CEO and president, in carrying out a “fraudulent scheme.”

Bill Stenger stands before the future Stateside Hotel at Jay Peak in 2013.

The lawsuit also named as defendant an attorney who worked for Quiros, David Gordon, whom he has since terminated.

Reiss, in dismissing the lawsuit Friday against the bank, also dismissed the claims against Gordon and his firm, MSK of New York City.

The lawsuit followed other filings that have been brought against Quiros and Stenger, including those leveled against the Miami businessman turned Vermont ski mogul in April 2016 by state and federal regulators.

In the federal case, the U.S. Securities and Exchange accused Stenger and Quiros of misusing about $200 million in investor funds raised through the EB-5 visa program.

Of that total, the SEC lawsuit contended, about $50 million was misappropriated, in part, for Quiros’ personal expenses, including more than $2 million for a luxury condo in New York City.

Stenger secured funds from investors and deposited those EB-5 monies into escrow accounts at People’s United Bank, federal regulators alleged, and then transferred the money to mirror accounts in Quiros’ name at Raymond James.

The proposed class-action lawsuit claimed Quiros used investor money to buy Jay Peak Resort in 2008, instead of using the money to build the Jay Peak and Tram Haus hotels as as investors had been promised.

In a “Ponzi-like” scheme, the lawsuit stated, the developers then raised money from new sets of investors for other projects to pay for massive upgrades at the resort, including the construction of the Jay Peak Hotel and the waterpark.

This pattern continued with seven phases of developments, including outside of Jay Peak, until Stenger and Quiros ran out of funding.

The money was supposed to be held in separate escrow accounts for each specific project, but the developers commingled the funds and used it to pay for other projects, the lawsuit stated.

According to the lawsuit, the action was filed on behalf of a proposed class of 837 EB-5 investors who put more than $400 million into the series of projects headed by Quiros and Stenger.

The projects spanned several years and included construction of hotels at Jay Peak and Burke Mountain, as well as plans for others that never materialized, such as AnC Bio Vermont, a proposed $110 million biomedical research center in Newport.

AnC Bio was to be located at the old Bogner plant in Newport.

“Quiros could not have executed his complex fraudulent scheme for almost eight years without People’s Bank’s knowing and substantial assistance,” the lawsuit stated.

“From the moment of Quiros’s involvement with Jay Peak,” the filing added, “People’s Bank misdirected and commingled investor funds for Quiros in clear violation of both its escrow agreements with investors and the Jay Peak Limited Partnership Agreements, which Quiros and Stenger provided to People’s Bank for each investment phase.”

People’s United Bank has disputed the allegations, filing a motion stating several reasons why the lawsuit should be thrown out.

Those contentions include a ruling from a Florida federal magistrate judge in a separate, but similar, proposed class-action lawsuit brought by investors in that state.

According to People’s United Bank’s motion to dismiss the latest lawsuit, merely pointing out that bank failed to act on alleged “red flags” in the fund transfer is not enough.

In the Florida federal case, the bank’s motion to dismiss in the Vermont lawsuit stated, the judge ruled “[r]ed flags do not amount to actual knowledge and are insufficient to meet the particularly requirement” of federal standards for civil claims.

Also, according to the bank’s motion, the investors have not shown “nor have they alleged that People’s had ‘actual knowledge’ of any fraud or breach of fiduciary duty that it supposedly aided and abetted.”

“We didn’t talk with him … It didn’t happen,” he said of Quiros, described by regulators as the “mastermind” of the alleged Ponzi scheme.

It was Stenger, Stricker said, “who directed” the fund transfers, and it was Quiros who improperly used those funds after they were released.

Tropin, representing the investors, said in court Friday that the claims in the lawsuit all stem from the start of the alleged Ponzi scheme when Quiros was permitted to use the escrow funds to purchase Jay Peak.

From then on, Tropin said, “they were using money from Peter to pay Paul.”

The commingling of the money that set off, he added, put all the investors at risk, from those who had money removed from the initial escrow accounts to others who thought their funds were going to one project when in reality they were being used to pay for shortfalls in earlier ones.

When it came to damages, Tropin estimated the 837 investors had put a total of about $415 million into the projects headed by Quiros and Stenger. An earlier $150 million settlement with Raymond James, a financial institution used by Quiros, would offset those damages, Tropin added.

Also, Tropin said, Michael Goldberg, the court-appointed receiver now overseeing the properties, including Jay Peak, that had been owned by Quiros and surrendered as part of a settlement of his SEC case, is working to sell the properties to benefit investors.

Even with that $150 million settlement and the sale of the properties, Tropin said there is still expected to a “shortfall” to investors of about $200 million.

“That’s what this case is about,” he told the judge.

Judge Reiss then asked him if he could tell her what cut of those damages each investor would receive, pointing out that some have already recouped their initial $500,000 investments, while others still have a stake in the properties that will hit the market.

“I could,” Tropin replied, adding, “I have a feeling I should.”