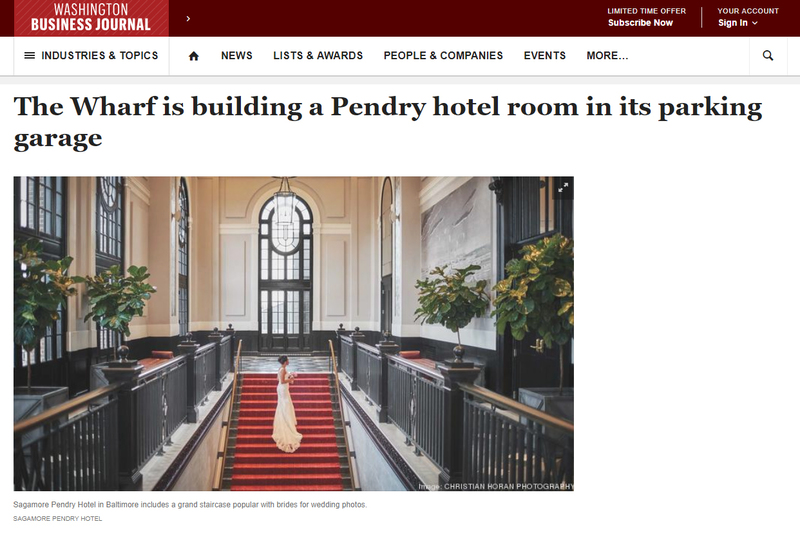 The developer had previously built model rooms other Wharf projects.

The Wharf is preparing for the hotel that will be part of its next phase — with a model room to be built in its existing parking garage.

That hotel is expected to be a Pendry Hotel, as WBJ reported in December and Pendry confirmed Wednesday. Pendry is a relatively new upscale hotel chain known locally for Baltimore's luxe Sagamore Pendry Hotel, owned by Under Armour founder Kevin Plank, which opened in 2017.

For the location at The Wharf, general contractor Lendlease is seeking a construction firm for an interior buildout of a model hotel room, according to construction leads site Dodge. The project includes not only a model master king room, but a typical elevator lobby and a hotel corridor.

The project will be built in the existing garage in parcel four of The Wharf, according to the document. Parcel four includes the Vio condominium building and the Incanto apartment building.

The contractor is looking for work on the model hotel facilities to start in March and be completed by June, according to the leads site. The cost for a mock hotel room, corridor and elevator lobby? As much as $2.9 million.

The Wharf already has three hotels in its first phase: the InterContinental Washington D.C. — The Wharf, as well as dual-branded Canopy by Hilton and Hyatt House hotels. Wharf developer Hoffman-Madison Waterfront also had model rooms built for some of those hotel properties in Phase 1; those model rooms were located in the basement of the Channel Inn, the converted hotel that served as the developer’s offices until it moved into new office space in the project.

The Pendry project in Phase 2 of The Wharf will include both a hotel and residences, a representative for Pendry confirmed. Pendry, a luxury brand from Laguna Beach, California's Montage International plans hotels and residences in upcoming projects in New Jersey, Utah and West Hollywood. The brand also has a second hotel open in San Diego and another slated for Manhattan.