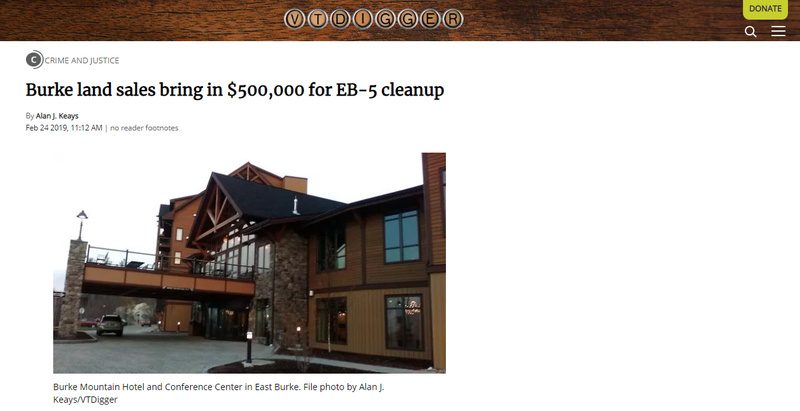 While Jay Peak ski resort hit the market earlier this year, smaller pieces of Ariel Quiros’ former empire in Vermont are also getting sold off, including land that had been owned by the parent company of Burke ski area for a total of about $500,000.

Meanwhile, state officials are also asking the Legislature to grant them authority to sell off five other properties formerly belonging to Quiros, valued at an estimated $2 million, that were part of a settlement of an investor fraud case brought by state regulators against him.

The sales represent a dismantling of the Miami businessman’s real estate portfolio in Vermont, more than two years after state and federal regulators brought civil fraud cases against Quiros alleging the misuse of $200 million of EB-5 investors’ money.

Last month, Michael Goldberg who was appointed by the court to manage the resorts, gained approval from the judge in that fraud case to hire a company to assist in Jay Peak’s sale.

Goldberg last year said the sale of the Burke resort is on indefinite hold.

This month, federal Judge Darrin P. Gayles granted Goldberg the authority to sell a 71-acre property at Burke. That property, according to a filing by Goldberg, is expected to be divided into four separate lots, with buyers already lined up for each.

The “undeveloped” land is owned by the resort, the filing stated, and Goldberg believes it “is not necessary for the operation of the Burke Resort.”

The land was purchased in 2005 for $400,000 by a prior owner of the resort who was considering creating a different access road leading to the resort as well as condominiums and a golf course. That proposal never went anywhere and nothing has happened with the property since.

A breakdown of the four lots from the 71-acre site and proposed sales shows:

“There is a home located on this 11.13-acre tract of land. The house sits on a plateau near the road. The land then drops down to an open meadow,” the receiver’s filing stated. “The home was originally built in 1890 and has been vacant for ten years. The home has no value, is not habitable, and will need to be torn down at the expense of the purchaser.”

“The parcel does not have scenic views; rather it is within sight of heavily traveled and noisy VT Route 114,” the filing stated. “The Pinkham Road Parcel sold for its listed price. There were no other bids on this parcel.”

• A property known as Victory Road Parcel 17 to Jeffrey Hale and Amy Hale for $70,000. The parcel is about 22 acres with frontage on Smith Hill and Victory Road.

“The parcel has very little access from Victory Road and not enough depth there for a building,” according to the filing. “The portion of the parcel available for building is off Smith Hill Road and will require substantial infrastructure of power, driveway and permitting for water.”

The Hale’s offer was the only one for the property.

“This parcel is a vacant lot bounded by White School Road, the East Branch of the Passumpsic River and Route 114,” the filing stated. “VT Route 114 is a heavily traveled and often noisy road. The location has substantial frontage on the river. The property also borders mountain bike and snowmobile trails.”

“These sales will result in additional cash being deposited into the Receiver’s account, which is maintained for the purpose of ultimately satisfying claims filed by the investors and creditors,” according to the filing.

“Moreover,” Goldberg wrote, “these sales will reduce any additional costs to the receivership associated with maintaining this portion of the property.”

The judge this month also granted Goldberg the authority to sell a separate three-acre property on Mountain Road across from the main entrance to the resort for $100,000 to Scott and Mildred Chappell, who own land next to it and have built residential rental units on their property.

“The Receiver, with the assistance of management of the Burke Resort, examined the best use of the three-acre tract of land and concluded that it does not serve any purpose to the Burke Resort,” Goldberg’s filing stated.

An independent appraisal set the value of the property at $100,000, and the Chappells agreed to that price, the filing stated.

According to separate lawsuits brought in April 2016 by state and federal regulators, Quiros and Bill Stenger, his former business partner, misused $200 million of more than $350 million they raised from EB-5 investors.

Both Quiros and Stenger have since reached settlements — neither denying nor admitting fault — with the U.S. Securities and Exchange Commission and state regulators in the cases, with Quiors agreeing to turn over to regulators both resorts and many other properties.

The sale of Jay Peak is not expected to take place until at least the summer. The proceeds from Jay Peak’s sale, according to Goldberg’s filing, will be distributed, on a “pro rata” basis, to the alleged defrauded investors.

Meanwhile, state officials, including Chris Cole, commissioner of the Vermont Department of Buildings and General Services, met this week with members of the the House Committee on Corrections and Institutions.

Cole was seeking the authority to sell the five properties formerly owned by Quiros worth an estimated $2 million that are part of a settlement reached by regulators in the state investor fraud civil case against him.

Cole said that settlement still needs final approval through the state’s court, but once approved, he wanted the state to be able to sell off the five properties, which include a townhouse in Jay, a home in Burke, and land in Troy.

He also talked of the possibility of seeking the authority to lease the properties to allow for “flexibility” should it take longer to sell off those assets.

The proceeds from the sale of the properties would be placed in a state-administered fund dedicated to economic development in Newport, home to two projects by the developers that never got off the ground.

One of those projects, a proposed biomedical facility, was deemed “nearly a complete fraud” by the U.S. Securities and Exchange Commission. The other left a large hole in the city’s downtown after buildings were razed for an office project that stalled once state and federal authorities put the brakes on the development in April 2016.

The fund for economic development in Newport will also have money from Stenger, who agreed to pay the state $100,000 over four years to settle his part of that case.

The committee took no action on the request this week.

Instead, Rep. Alice Emmons, D-Springfield, chair of the House Corrections and Institutions Committee, asked legislative counsel to work with the attorney general’s office regarding specific language of the sale and lease provisions for the properties.