With Fresh CEO, By Chloe Preps for Take-Off 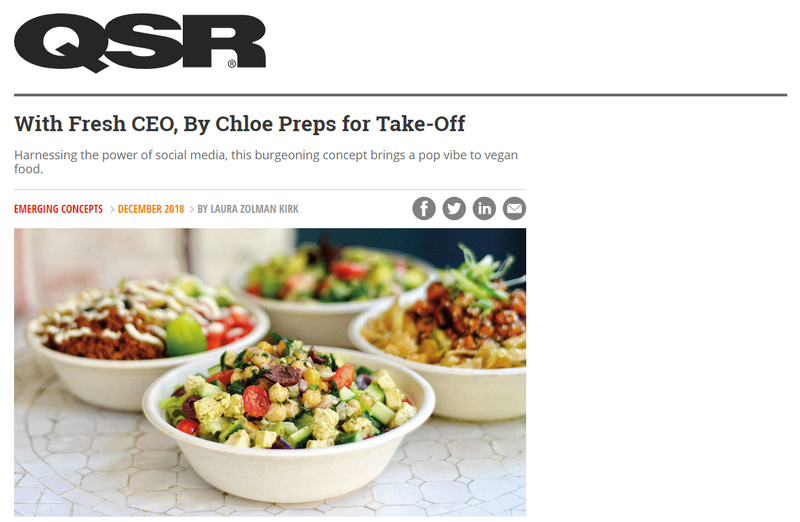 Harnessing the power of social media, this burgeoning concept brings a pop vibe to vegan food.

When by Chloe launched three years ago vegan was a scary word. That's no longer the case.

Although vegan cuisine has always boasted a health halo, it hasn’t enjoyed the “fun” reputation of indulgent foods like pizza and burgers. By Chloe is setting out to change that. The ESquared Hospitality–owned brand has found success in marrying approachable vegan fare to a lighthearted pop branding—both elements loved by many a social media influencer.

“Our mission was always to bring delicious food to the masses that just happens to be vegan, plant-based,” says Samantha Wasser, who founded the company with celebrity chef Chloe Coscarelli in 2015. “We really set out to appeal to everyone.”

Despite the drama around Coscarelli’s break from the brand in 2017, by Chloe is amassing quite a following in New York, Boston, Los Angeles, and London, where it has targeted its expansion.

On Thursday, by Chloe took another growth step when it announced Patrik Hellstrand as its chief executive officer. Hellstrand most recently served as CEO of Oath Pizza, a fast casual based in Boston. Before Oath, Hellstrand was the group vice president of operations at Equinox.

“I’ve long been committed to the movement and focus around wholesome food and sustainability, which is why I love how by Chloe has been able to carve out a niche and offer a plant-based menu with an added, uniquely indulgent, feel-good food experience,” Hellstrand said in a statement.  “I couldn’t be more excited to join Samantha and this team at such an exciting stage of the company's life to help position the brand for continued success.”

“We are honored to welcome Patrik to the by Chloe family at such a pivotal moment in the brand’s growth,” Wasser added. “Patrik’s operational expertise and respected experience within the hospitality industry will be invaluable to the future of by Chloe and I look forward to collaborating with Patrik to actualize by Chloe’s full potential.”

With Hellstrand’s hiring, and the support of investment partners including Kitchen Fund and Bain Capital Double Impact, by Chloe said it’s poised for expansion in 2019 with a focus on targeted city growth. According to Moneyish, by Chloe received $31 million in funding in April from Bain Capital, Kitchen Fund, RiverPark Ventures, Collaborative Fund, TGP International/Qoot International, and other strategic investors. The goal for by Chloe, the company said at the time, was to double its footprint to 20 locations domestically and internationally, and to “increase its social impact objectives, and strengthen operations and marketing initiatives over the next two years.”

“We invested in by Chloe because we believe in the brand’s potential to expose people all across the globe to delicious and unprocessed plant-based food,” said Warren Valdmanis, managing director at Bain Capital Double Impact, in a statement. “We are pleased to have Patrik Hellstrand, and his authentic focus on health and sustainability, lead this ambitious next phase of by Chloe’s growth alongside Samantha.”

When by Chloe launched three years ago, Wasser says, vegan was a scary word. Many people were intimidated by vegan restaurants that catered to a crunchier crowd with natural vibes and earth tones. Wasser, however, went in the opposite direction.

The restaurant’s design looks more like a retro burger chain than the sterotypical vegan restaurant thanks to its walls of contrasting blacks and whites with pops of color. The brand’s Instagram could be that of an avant garde museum. Plus, marketing and branding materials don’t say “vegan” everywhere. Wasser describes the brand as eclectic and kitschy. “To me, what makes a fast casual successful is having a strong voice and a strong brand,” she says.

The concept’s customer skews female and millennial, but among its seven New York locations, the team has been surprised by the variety of clientele: from college students to tourists to classy corporate workers.

The restaurant’s entirely vegan menu consists of comfort foods like the Pesto Meatball Sub (Wasser’s favorite) made with portobello mushrooms and cashew mozzarella, and The Guac Burger featuring a black bean-sweet-potato-quinoa patty. Everyone has a reference for what these foods are; by Chloe has just given them a vegan spin.

The restaurant’s Mac n’ Cheese may be made with sweet potatoes, cashews, shiitake mushroom bacon, and almond parm, but it’s still pasta topped with a creamy sauce: identifiable, classic, and—Wasser would argue—craveable.

Sweets are a big part of the restaurant’s business, too. Desserts like the Chlostess cupcake (playing on the idea of the Hostess CupCake but 100 percent vegan) have garnered such fanfare that the brand has spun off Sweets by Chloe bakeries in its target markets.