A Powerhouse NYC Bar Brand Is Moving In at the Wharf 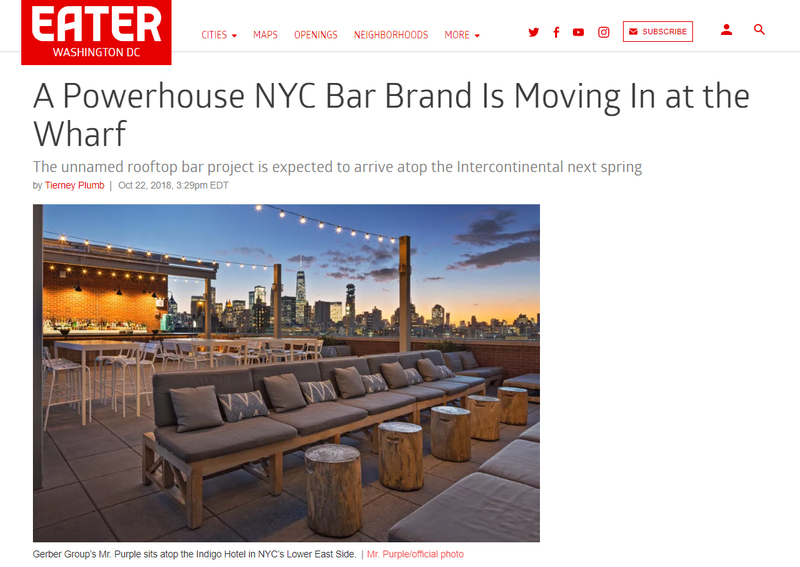 The Wharf is expected to introduce a scenic watering hole on the 12th floor of the Intercontinental Hotel by next spring.

Owner Scott Gerber tells Eater that the bar at 801 Wharf Street SW will have its own entrance on the ground floor with an elevator that shoots directly to the roof. Some of Mr. Purple’s cocktails will likely make an appearance in Southwest, like its bottled sparkling Negroni and shareable Manhattans and Moscow Mules.

Gerber stresses his debut D.C. project is a bar — “not a restaurant with a celebrity-driven chef” — but will still offer light fare like individual pizzas, burgers, soft pretzels, and hummus and veggies. The bar is projected to open daily at 4 p.m. and serve through last call.

Many elements of the shell space, including cement columns, will be left untouched. Those industrial touches will be juxtaposed against soft accents like leather furniture and an antique mirror planted behind the U-shaped bar. The indoor-outdoor layout will also include a lounge, bench seating, and high-top tables.

The yet-to-be-named bar could kick off Gerber’s expansion plans across D.C.

“We are looking at a few other things,” he tells Eater, declining to name potential sites at this time.

Next month Gerber is opening a branch of its Kingside lobby bar at the Viceroy Central Park at La Guardia Airport’s new terminal. The group just wrapped up a renovation of Whiskey Blue at the W Atlanta.

A worldwide partnership with the W brand nearly led Gerber and his team to plant a business where W’s rooftop bar stands downtown. For “various reasons,” Gerber says, the ownership group did not move forward with that project.

“We’ve been busy looking around for the right space and partners,” he adds.

Gerber says he was introduced to the Intercontinental project while it was under construction about 18 months ago. Mr. Purple’s perch is in Indigo on the Lower East Side — a hotel brand under Intercontinental’s umbrella.