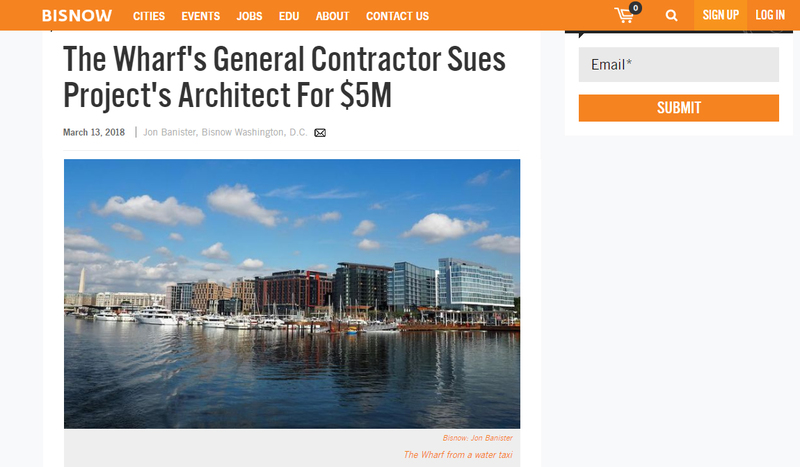 Clark Construction has filed a lawsuit against Perkins Eastman over services performed during the first phase of construction at The Wharf, D.C.'s $2.5B Southwest Waterfront development.

The project's general contractor is seeking $5M in damages, claiming the Wharf's lead architecture firm made significant errors and omissions in its design documents that cost Clark millions of dollars during the project.

The lawsuit, first reported by Washington City Paper reporter Andrew Giambrone on Twitter, was filed Friday in U.S. District Court for the District of Columbia.

Clark and Perkins Eastman did not immediately respond to requests for comment. Clark claims Perkins Eastman breached the contracts the parties entered into in April 2014 before construction began. The three-count lawsuit also claims professional negligence and negligent misrepresentation.

The suit claims these errors could not have been discovered before construction began, and says there could be additional problems down the road.

"It remains possible and likely that errors and omissions will continue to arise and become known, discovered, and appreciated in the future as discovery in this matter proceeds," the lawsuit states.

The Hoffman-Madison Waterfront development team is currently going through the approval process for The Wharf's second phase. Perkins Eastman is also serving as the lead architect for the 1.2M SF Phase 2, which the team hopes to break ground on later this year.