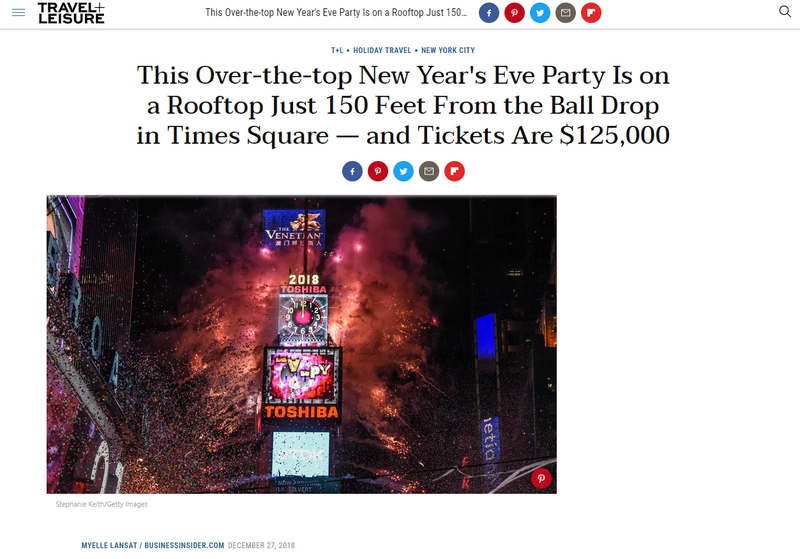 An estimated one million people crowd into sectioned-off quarters of Times Square every year to see the famous countdown and ball drop on New Year's Eve.

But that's not the only way to enjoy the celebratory night in person. You can experience an exclusive party at The Knickerbocker Hotel's St. Cloud rooftop, just 150 feet from the ball drop — if you're willing to pay at least $4,335.

The hotel sits on the corner of 42nd street and Broadway, giving guests the Times Square experience without the crowded streets. The site was built in 1906 by Jacob Astor IV, whose family line is also responsible for several other properties in New York City, including the St. Regis Hotel.

The Knickerbocker Hotel claims several historical moments happened within its walls, including the creation of the first-ever martini and the debut of the red velvet rope to help control dinner crowds.

But one of its most luxurious creations is an exclusive rooftop experience to ring in the new year. Check out what up to $125,000 could buy you on New Year's Eve at the historic hotel.

You can enjoy New Year's Eve 150 feet away from the iconic ball drop atop The Knickerbocker Hotel with a choice of three experiences: Gold, Platinum, or VIP box seats.

The Gold package costs $4,335 and comes with general admission to an indoor reception and free-flowing outdoor access.

For $5,425, the Platinum package earns you VIP party access, reserved seating to watch the ball drop, "ultra premium" open bar and bottle service, and a personal heater, waiter, and blanket.

Your guest room, however, will not feature a view of the ball and you have to pay in full at time of booking — no refunds.

With a minimum two-night stay, guests can avoid the New Year's crowd inside the hotel, which sits on the corner of 42nd street and Broadway. Don't worry, the hotel has sound-proof windows and automated black-out drapes.

The Knickerbocker was built by John Jacob Astor IV in 1906, who died on the Titanic just six years later. The hotel hosted many famous 20th century names including F. Scott Fitzgerald and John D. Rockefeller. It cost just $3.25 a night when it originally opened.

The original 1906 speakeasy hotel entrance can be found at the 42nd Street - Times Square subway station. It was frequently used by Rockefeller before the door was permanently shut — you can find it near the Track 1 Shuttle to Grand Central.

The hotel claims it is the site where the martini was created. As the story goes, Rockefeller was served a drink by then-bartender Martini di Arma di Taggia consisting of gin, dry and sweet vermouth, citrus and orange bitters, garnished with a lemon twist. You can still order the original drink.

In 1919, Jackie Kennedy's father was kicked out of the hotel lobby for skipping.

The Knickerbocker closed for a period of time after the Prohibition era and reopened in 2015. This year's NYE guests can enjoy luxurious updates including the Charlie Palmer restaurant, bar, and lounge.

To kick off New Year's resolutions, guests also have access to the gym.

"What was once an annual celebration has become a global tradition, and The Knickerbocker offers guests the opportunity to experience it at the crossroads of the universe, 17 stories above the crowds," Vincent Vienne, managing director at The Knickerbocker Hotel, said in a press release. "There is simply no better way to ring in the New Year."