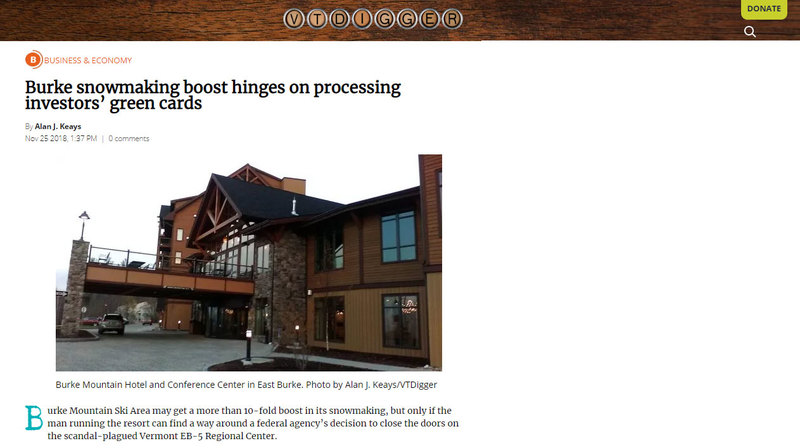 Burke Mountain Ski Area may get a more than 10-fold boost in its snowmaking, but only if the man running the resort can find a way around a federal agency’s decision to close the doors on the scandal-plagued Vermont EB-5 Regional Center.

That’s the message from Michael Goldberg, who was put in charge more than two years ago of the operation of Burke Mountain Ski Area and Jay Peak Ski Resort after regulators accused the owner of the two resorts, Ariel Quiros, and his business partner, Bill Stenger, of investor fraud.

“There’s a lot of moving parts because (U.S. Citizenship and Immigration Services) terminated the regional center and I need to get over that hurdle prior to creating jobs,” Goldberg said in a recent interview.

“Pardon the pun, but I think people are getting a little too far in front of their skis right now on it,” he said of reports that make it sound like the plan to increase snowmaking at the Burke resort in the Northeast Kingdom is a done deal. “There are a lot of balls up in the air.”

Earlier this year, Goldberg put on indefinite hold a plan to sell the Burke resort.

As a result, Goldberg said, he needed to come with a plan to boost jobs created at the resort. That’s when the idea arose of increasing snowmaking at the resort, he said.

“If I need to create more jobs, it seems to me the best way to do that is expanding the snowmaking capacity which will attract more people up to area which will increase the hotel stays and increase the value of the hotel,” he said.

“If I have to spend the money on something,” Goldberg said, “the snowmaking project seems to be a logical way to do that.”

Expanding the snowmaking operation, he said, would allow the resort to open earlier, stay open longer and provide the ability to better maintain conditions during any warmer parts of the ski season.

According to Goldberg, the plan to boost snowmaking at Burke involves expanding a current 2.5 million gallon pond to 30 million gallons. He said he hoping to finance the $6 million cost for the snowmaking proposal through grants, seeking other partners, and receivership funds.

He estimated that he needs to create roughly 60 jobs at the resort for six EB-5 investors who are in are still in jeopardy of failing to obtain green cards from their $500,000 investments in Burke.

Under the EB-5 program, each $500,000 investment must lead to the create of 10 U.S. jobs for an investor to qualify for permanent residency in the country.

“But if I don’t have USCIS cooperating, it doesn’t matter how many jobs I create,” Goldberg said.
“I have to find a way around that hurdle.”

He wouldn’t go into detail on what that plan is, other than to say he’s pursuing all options.

“We are going down multiple paths now, but it may not come to fruition,” he said. “Maybe it’s something we can’t do, but until our final effort is pushed back we’re going to try to do it.”

In July, the USCIS, in its notice terminating the state-run EB-5 center, issued a blistering review of the facility’s operation.

USCIS took the state to task for its lack of oversight and misrepresentations regarding the series of projects headed by Quiros, former owner of both Jay Peak and Burke ski areas, and his past business partner, Stenger, Jay Peak’s former president and CEO.

The state is appealing that USCIS decision, seeking to “wind down” the center’s operation and continuing to process the paperwork needed for investors who have already put money into EB-5-funded projects rather than immediately shuttering the facility’s operation.

Both Quiros and Stenger have reached resolutions in civil cases brought by federal and state regulators who say the two developers misused $200 million of the more than $350 million they raised from hundreds of investors through the EB-5 program to fund massive developments.

Those developments included new hotels and condos at Jay Peak as well as the 116-room hotel and conference at Burke Mountain. A federal criminal probe into what regulators termed a “Ponzi-like scheme” remains ongoing.

Goldberg said there isn’t a hard deadline on when a decision will be made to move forward with the snowmaking plan or pull the plug.

But, he doesn’t expect that to happen anytime soon.

“I don’t think it’s a matter of weeks,” Goldberg said. “I think it more a matter of months.”