As Big Firms Gobble Up Ski Resorts, Are Burke and Jay on the Menu? 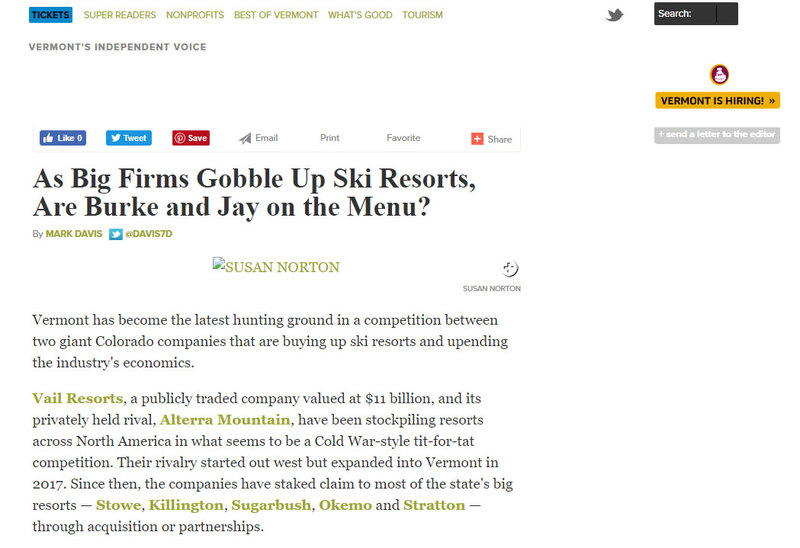 Vermont has become the latest hunting ground in a competition between two giant Colorado companies that are buying up ski resorts and upending the industry's economics.

Vail Resorts, a publicly traded company valued at $11 billion, and its privately held rival, Alterra Mountain, have been stockpiling resorts across North America in what seems to be a Cold War-style tit-for-tat competition. Their rivalry started out west but expanded into Vermont in 2017. Since then, the companies have staked claim to most of the state's big resorts — Stowe, Killington, Sugarbush, Okemo and Stratton — through acquisition or partnerships.

Industry experts say their duel has created something of a seller's market for ski mountains, which could be good news for two scandal-tainted Northeast Kingdom resorts, Burke Mountain and Jay Peak. As this year's ski season approaches, those facilities remain in limbo long after backers had hoped they would make a fresh start.

Although the receiver appointed by a federal judge to manage Jay Peak and Burke Mountain said in November 2016 he planned to sell the properties by the following spring, that did not happen. The receiver, Michael Goldberg, recently reported to the judge overseeing the EB-5 investor fraud case that he is actively courting buyers for Jay Peak, although attempts to sell Burke are on indefinite hold. Goldberg did not return messages seeking comment.

But in his August letter to the judge, Goldberg said he has contracted with a "preeminent banker who specializes in the sale of ski resorts" and plans to host "numerous potential purchasers" this winter. The goal is to sell Jay Peak by June 2019, he wrote. Despite periods of extreme cold and little snow, Jay Peak finished the 2017-18 ski season $1.25 million ahead of its revenue forecast and with more cash on hand than after the prior year, Goldberg reported.

The situation is not as rosy at Burke Mountain, he wrote. Revenue for the last ski season was less than anticipated, and skier visits were down 6 percent. The ski area hotel that opened to much excitement in 2016 lost money during the 2017-18 skiing season, though bookings were up over this past summer.

Jay Peak and Burke Mountain have been in receivership since 2016, when state and federal regulators sued the former owner, Ariel Quiros, and CEO Bill Stenger, accusing them of running a Ponzi-like scheme. The men allegedly defrauded 800 wealthy foreigners, each of whom invested at least $500,000 in projects, including at the two resorts, in hopes of earning U.S. visas. The federal EB-5 Immigrant Investor Visa Program provides green cards in exchange for investments that create jobs.

The sale of Burke is on hold because, unlike Jay Peak, it has not yet generated enough jobs to meet federal thresholds to give its investors U.S. residency, Goldberg wrote. He plans to meet EB-5 requirements before selling the resort. Goldberg wrote that he is considering additional construction projects. He did not provide details or a time line, though long-discarded plans for Burke Mountain called for tennis and aquatic centers and a mountain bike facility.

Jay Peak and Burke Mountain are entering a market that has been transformed by Vail and Alterra since the EB-5 scheme unraveled.

Each company's business model revolves around relatively cheap season passes — Vail's Epic and Alterra's Ikon — that give consumers nearly unfettered access to all of their respective resorts. Both passes have sold for as low as $899 for the 2018-19 season.

To entice East Coast customers, the Colorado-based companies have begun buying resorts in Vermont. Vail struck the first blow, buying Stowe Mountain Resort's ski operations in February 2017 for $41 million. In April 2017, the conglomerate that would be rebranded as Alterra bought Stratton Mountain Resort in southern Vermont.

In February, Alterra announced that Killington Resort and Sugarbush Resort in Warren would both accept the Ikon pass.

In June, Vail upped the ante, announcing a deal to buy Okemo Mountain Resort in Ludlow as part of an $82 million transaction that also included resorts in New Hampshire and Colorado.

Ski areas have offered combination passes with other resorts for years. But the scale of the competition between Alterra and Vail, and their relatively cheap passes, has shaken up the ski industry. A year on their slopes often sells for less than a pass at a single Vermont mountain.

Vermont loves small and local. Is skiing an exception? Supporters of the companies say they bring investment dollars and visitors to Vermont and offer good deals to the state's die-hard skiers.

"Our initial assessment is, it's a good thing," Vermont Commerce Secretary Michael Schirling said. "We see it as a funnel for new folks to visit Vermont."

Dave Belin, a ski industry analyst with RRC Associates in Boulder, Colo., said banks are often leery of lending to resorts because the business is seasonal, making it difficult to make big-ticket improvements — new lifts or trails, for example — that help resorts prosper and grow.

But the big companies can fund improvements. Alterra has promised to spend $555 million over five years at its North American properties, including $10 million for new lifts and other upgrades at Stratton. Vail said it would spend $35 million over two years at the four recently acquired resorts, including Okemo.

"Large companies bring capital dollars to the table," Belin said. "There are ski areas in Vermont that could use some freshening up, and it's hard to get capital in the ski industry."

The companies, meanwhile, benefit from enormous economies of scale and a broader customer base that, they hope, spreads out over so many mountains that none becomes overcrowded.

Stratton president Bill Nupp said some of his guests bought Ikon passes last spring to squeeze in some late-season skiing at bigger mountains in California. He is hoping skiers out west will make similar plans to travel east.

"We expect the Ikon pass will introduce a new audience to Stratton and Vermont," he said.

There are, however, concerns that while the Epic and Ikon passes may help resorts lure more existing skiers, they do little to address the longest-running concern in the ski industry: enticing new people to take up the pricey sport.

The growing presence of Alterra and Vail could also make life more difficult for midsize and smaller mountains — the bargain places where new skiers often get their start.

Lindsay DesLauriers, whose family owns Bolton Valley Resort, said they believe it can survive by catering to families and locals, as it always has.

Jay and Burke are not part of a pass alliance, though they do offer a joint pass, which sold for $799 last spring and now costs $1,259.

With Vail and Alterra slugging it out, an obvious question is being batted around the local ski industry: Could one or both companies be suitors for Jay Peak and Burke Mountain?

"I don't see why they wouldn't be a great addition to those portfolios — particularly Jay," said Adam White, communications director at the trade association Ski Vermont.

In his court filings, receiver Goldberg said he "believes there is significant interest" in Jay Peak among prospective buyers, though he did not name them. No one expects Alterra or Vail to stop buying resorts.

"The trend is, the people buying ski resorts are people who already own ski resorts," Belin said. "There are not a lot of buyers who don't already have experience."

Jim O'Reilly, president of the Burke Area Chamber of Commerce, said most area residents just want an owner who can put the local resort on stronger financial footing.

"We're pretty organic up here — going big corporate doesn't seem to fit," O'Reilly said. "But at the end of the day, we need someone to buy it who can move it forward. It's been many years that we keep saying, 'Burke is finally going to take off,' and it just hasn't. So it might need that kind of [corporate] blood to move forward."