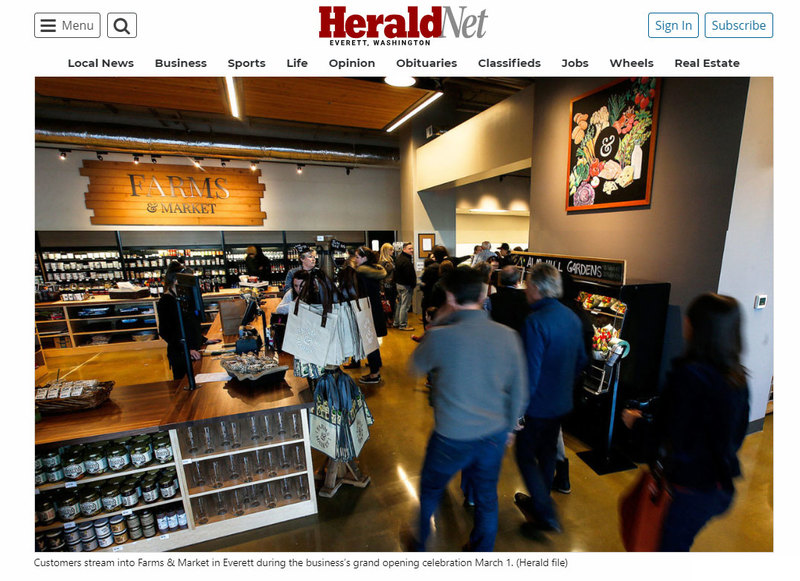 The artisan grocery in the Grand Avenue Marketplace development is expected to close Sept. 14.

Susan Bradley has been shopping at the Farms & Market store on Grand Avenue since it opened in March.

On Friday, weekly customer Bradley learned that the artisan grocery store will close this month.

“Everything is so fresh here,” the Mukilteo resident said. “This just breaks my heart.”

Farms & Market, which opened to much fanfare in March, is expected to close Sept. 14.

“Store closing” signs were posted throughout the business on the ground floor of the Grand Avenue Marketplace and Apartments development downtown.

The 7,000 square-foot store includes a cafe and deli. It’s expected they will cease operations when inventory runs out, an employee said.

The market’s developer, The Carlin Company, was not available for comment.

Carlin is a food market development and consulting firm based in Napa, California. The company has opened other artisan food markets in San Francisco, Napa Valley and other areas of Northern California.

Farms & Market was developed as a retail and restaurant concept to connect local farmers directly with consumers. Local produce is accompanied by labels about the grower and the distance from the store. A sign on a basket of tomatoes, for example, touted that they were grown at a farm “9.5 miles away.”

Eilis Boncuk dropped into the cafe Friday for lunch and took a seat near the deli case. “I’m sad to see it go,” she said. “It was a nice new place.” Boncuk, who lives in Everett, said she’d been looking forward to buying local products there when farmers markets close for the season.

Grand Avenue Marketplace and Apartments was originally called Potala Place when it was first developed by Lobsang Dargey. He defrauded investors and misused tens of millions of dollars. He was sentenced to four years in prison in August 2017.

A business called EB5 Group based in Las Vegas took control of the property in 2017. The EB5 Group retained The Carlin Company.