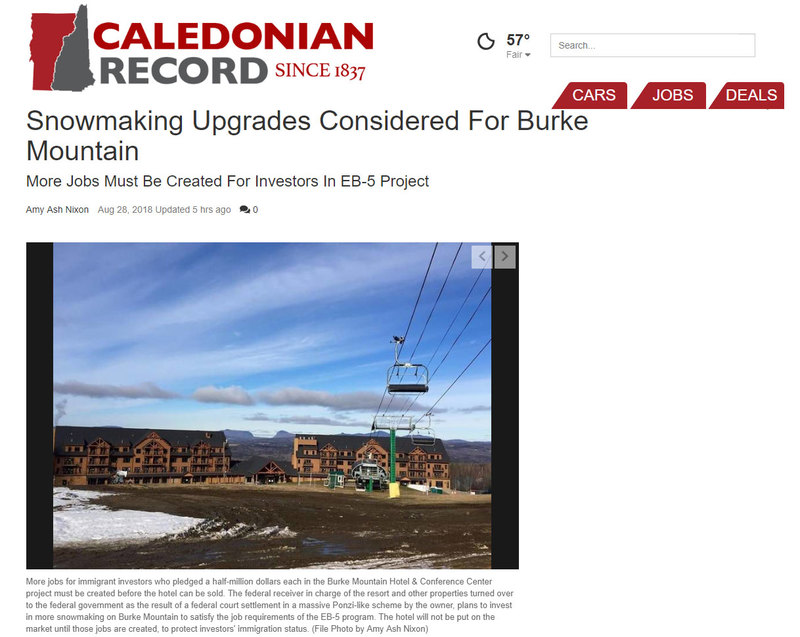 More Jobs Must Be Created For Investors In EB-5 Project

Burke Mountain may see its snowmaking equipment bolstered in a move planned by the federal receiver in charge of the resort.

Michael Goldberg – appointed the federal receiver of Burke Mountain, Jay Peak and other assets of businessman and former owner Ariel Quiros in April 2016 – said more jobs must be created for EB-5 investors in the Burke hotel project, and the snowmaking expansion would create construction jobs – and improve the economic prospects for Burke Mountain.

In an interview on Friday, Goldberg said to satisfy the EB-5 program job creation requirements for the Burke project, he needs to still create jobs for about 10 of the nearly 120 investors so that their permanent green cards, promised through the EB-5 investment in economic development projects in targeted regions, can be issued.

“We are exploring to create new jobs vastly improving the snow-making on the mountain,” said Goldberg. “It’s only in the exploration stage right now.”

Goldberg recently said the need to create more jobs associated with the Burke hotel construction project would mean that an earlier plan to try to sell the resort this year will now be on hold.

The snowmaking investment will not happen in time for this year’s ski season, said Goldberg.

Kevin Mack, general manager at Burke Mountain, said on Monday that future snowmaking plans “are not close to being finalized. Any investment in Burke Mountain, Michael’s been great about recognizing that beyond the hotel, the resort has a number of infrastructure improvements that long have been needed, and snowmaking is just one of them.”

“If Michael wants to look favorably on Burke, we appreciate that,” said Mack, who said the past two months have been the strongest for the hotel since it opened, “We’re hitting a lot of the benchmarks we set, and we’re very excited about that.”

The plans would “require a significant investment,” said Goldberg, who said the added capacity would position Burke with one of the strongest snow-making systems for a New England resort, giving it a competitive edge.

“It would involve increased capacity in the pond water storage, and would involve running new pipes along the mountain for infrastructure and a lot of improvements needed to make snow,” said Goldberg.

While plans for the project are early, Goldberg did say, “We are dealing with engineers and everything already, and are looking at funding sources and all that. We are probably a few months away from deciding.”

Goldberg said having a guarantee of snow cover for visitors to Burke Mountain will make the resort and its new hotel/conference center more economically viable.

“Just the fact that if people want to come to the mountain for a week, they want to know there’s going to be snow,” said Goldberg. “So this would help that people would be ensured that there is snow. It will help the hotel and the whole community of Burke,” he said of the hoped-for added snowmaking capacity at the mountain.

Goldberg said the resort and hotel being stronger is in the region’s best interest.

The required number of jobs per investor – each investor pledged $500,000 each to the project – is ten jobs, said Goldberg, who said somewhere between 60 and 80 jobs need to be created to satisfy the immigration and EB-5 requirements.

Goldberg said the work on the construction project and infrastructure will count toward those remaining needed jobs.

“It won’t happen this ski season, hopefully it will happen for the following ski season,” said Goldberg.

Goldberg said, “It’s a little unclear when Burke will be put on the market … Somewhere within the next couple of years.”

While Goldberg’s most recent update on the receivership entities’ finances, including Jay Peak Resort, show that Burke continues to lose money, he said in recent days, “Each month we’ve been setting a record on occupancy and economics, so the hotel is definitely improving month by month.”

In a recent nearly 200-page filing in U.S. District Court in Miami, Fla., where the federal case against Quiros brought by the federal Securities and Exchange Commission (SEC) is housed, Goldberg offered an extensive update on both ski resorts and the receivership overall.

Quiros has since that time settled with both the SEC and the State of Vermont’s attorney general, surrendering more than $80 million in real estate and bank accounts, including the two ski resorts in Vermont’s Northeast Kingdom which Goldberg will ultimately position for sale.

Of Burke continuing to lose money, Goldberg, in his recent update filed in federal court, stated, “This loss is not uncommon for a hotel that is not even two years old and is still building clientele. This summer has seen record bookings for the Burke Hotel and it is becoming apparent that the Burke Hotel is actually an all-season hotel.”

Goldberg writes, “The Receiver and his management company are optimistic that the Burke Hotel’s performance will continue to improve next year and can operate close to break-even, or even become profitable.”