Burke Resort Needs More Jobs Prior To Sale; Jay Peak Should Sell By Next Summer 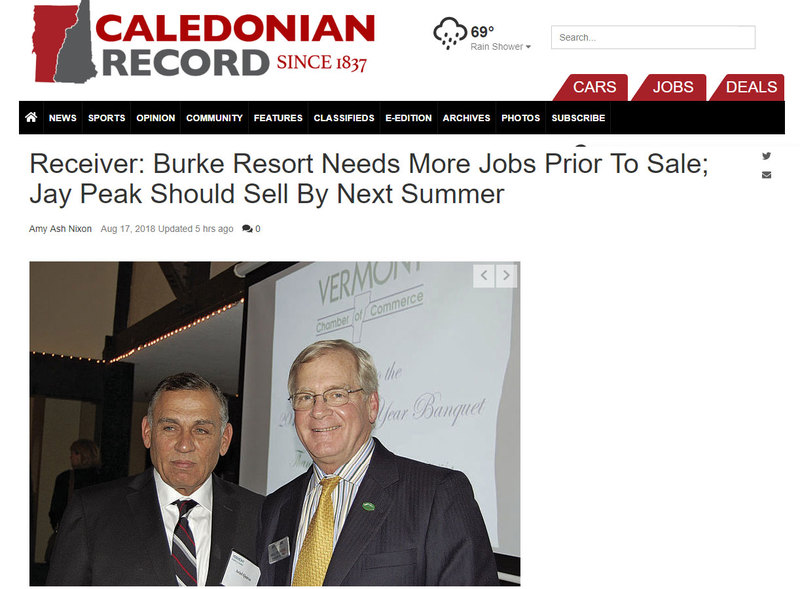 He said the property will likely be shown to interested parties starting this fall and through the winter, and he’s hoping for a sale by next summer.

However, Goldberg’s earlier hope that Burke Mountain Resort, the other Northeast Kingdom ski property he has been overseeing since the federal government seized the properties of former owner Ariel Quiros in 2016 in the largest fraud case in Vermont history, is not going to be sold this year, Goldberg told the court.

In order to satisfy the job creation requirements for foreign investors in the EB-5 program to obtain their permanent green cards, more jobs must be created connected to the Burke Mountain project, and more construction projects are in the process of being planned, he said.

Goldberg could not be reached by press time on Thursday for more detail on those plans.

Burke is continuing to lose money, Goldberg wrote in his filing to the court, but is seeing gains over last year across the board.

In a recent nearly 200-page filing in U.S. District Court in Miami, Fla., where the federal case against Quiros brought by the federal Securities and Exchange Commission (SEC) is housed, Goldberg offered an extensive update on both ski resorts and the receivership overall.

Quiros has since that time settled with both the SEC and the State of Vermont’s attorney general, surrendering more than $80 million in real estate and bank accounts, including the two ski resorts in Vermont’s Northeast Kingdom which Goldberg will ultimately position for sale.

The pair had been accused of allegedly misappropriating more than $200 million in foreign investors’ funds in the EB-5 program in which immigrant investors qualify for permanent green cards when their pledges can be linked to job creation or retention.

Quiros was further accused in the cases of having allegedly siphoned another $55 million-plus off of the investor funds meant for economic development projects in the NEK to fuel his lavish lifestyle, court documents laid out.

Burke Sale Down The Road

Earlier, Goldberg had hoped to market both the Burke and Jay Peak ski properties this year, but in the filing Aug. 10 in federal court, he wrote, “The administration of this receivership is more complex than most because the Receiver is not simply liquidating assets, but must also focus on overseeing the operations of a large resort and hotel and on job creation in order to achieve the immigration goals of the investors under the federal EB-5 program.”

“Since the date of the last report, the Jay Peak and Burke Resorts completed their ski seasons,” Goldberg wrote to the federal judge overseeing the receivership case. “Although the ski season got off to a slow start due to the unprecedented continuous record low temperatures during the last two weeks of 2017 and the beginning of 2018, the Jay Peak Resort ended strong and combined with cost savings, finished with more cash on hand than last year.”

The Receiver’s fifth interim report continues, “The Burke Hotel also had a better year than last year, although it continued to lose money.”

“This loss is not uncommon for a hotel that is not even two years old and is still building clientele,” noted Goldberg. “This summer has seen record bookings for the Burke Hotel and it is becoming apparent that the Burke Hotel is actually an all-season hotel.”

Goldberg writes, “The Receiver and his management company are optimistic that the Burke Hotel’s performance will continue to improve next year and can operate close to break-even, or even become profitable.”

He noted that in the past six months, the receivership’s work has been focused on completing construction of athletic fields in Jay, “which is necessary to create the final jobs needed for all Jay Peak Hotel Suites Stateside L.P. (Phase VI) investors to qualify for citizenship.”

“These projects will be completed in the next four to six weeks and, based on the projections of the Receiver’s economist, the Receiver believes that enough jobs have been created for all investors in Jay Peak Phases I-VI to meet the requirements of the federal EB-5 program,” Goldberg told the court. “With respect to Jay Peak Biomedical Research Park L.P. (Phase VII) investors, as of the date of this report, all but eight investors have either redeployed their funds into the One Wall Street project (another EB-5 project not related to the Quiros holdings) or have been refunded the principal amount of their investment.”

Goldberg’s report assessing the picture at both Vermont ski resorts and the work being done to address the issues that remain before they can be sold goes on, “The Q Burke Mountain Resort, Hotel and Conference Center (Phase VIII) project on Burke Mountain is still short of the requisite job creation, however, the Receiver is preparing a plan to present to the Court to fund additional construction to create the requisite jobs needed for all investors in Phase VIII to meet their EB-5 requirements.”

Efforts to reach Goldberg Thursday for additional comment on future plans and building projects referenced for Burke in the recent report were not successful by press time.

Goldberg referenced the recent termination of the Vermont Regional Center for EB-5 projects by the U.S. Citizenship and Immigration Service, noting that step has presented “significant challenges with respect to those investors who have not yet had their I-526 petitions approved and relocated to the United States.”

He said the receivership has put significant time into “preparing the Jay Peak Resort to be marketed for sale.”

“To that end, the transfer of all resort-related properties (i.e., the Jay Peak Mountain) by Ariel Quiros has been completed and the Receiver’s attorneys have almost completed all title work.”

He said the receivership has “negotiated an agreement with a preeminent banker who specializes in the sale of ski resorts to represent the Receiver in connection with marketing the Jay Peak Resort,” which he expects to file a motion connected to this week in U.S. District Court, as well.

“It is expected that the sales process will take between six to 10 months to identify a purchaser and close a transaction,” stated Goldberg in the filing in recent days.

However, the sales process for Burke will not be happening as quickly, noted Goldberg.

“The Receiver does not plan to market the Burke Hotel at this time because it has yet to create the required jobs for all investors to meet their EB-5 requirements,” he noted.

The report includes an extensive update on the status of all aspects of the receivership’s work with respect to the many projects Quiros’s enterprise had been embarking on and taking in tens of millions of dollars for over a period of eight years.

“Most of the title work necessary to sell the Jay Peak Resort has already been in progress for months and is expected to be completed shortly,” Goldberg told the court. “The investment bankers will communicate with potential buyers throughout the United States, Europe and Asia and the Receiver believes there is significant interest in the Jay Peak Resort.”

Tours of the property for potential buyers are anticipated this coming fall and winter, Goldberg noted. He said he is hopeful the sale can be completed in the summer of 2019.

He noted in the report that lodging revenues at Jay are trending ahead of last year thanks in part to an expanded summer hockey camp and tournament schedule, and summer events and plans for a first-ever soccer tournament expected to boost business to the resort.

Burke enjoyed an extended ski season with new equipment investments at the mountain, and “experienced year-over -year growth across each month of the winter season.”

Paid skier visits were down about six percent from the prior year, while season pass sales were up seven percent.

Conference center and banquet revenue bookings are up 10 percent at Burke and lodging revenues are 24 percent higher than last year. Bike park revenue is running about 20 percent over last year, noted Goldberg.

Goldberg told the court he is continuing to operate and maintain the facilities “until the best course of disposition is determined with the goal of each investor obtaining the highest possible return on their investment and achieving their unconditional green card.”

He also is continuing to work to satisfy the EB-5 job creation requirements, to pay the claims of creditors and investors and to investigate and commence litigation against third parties which played a hand in what authorities have repeatedly characterized as a ‘Ponzi-like’ scheme masterminded by Quiros, and the most massive case of securities fraud in Vermont state history.