CEO whose company is buying Saddleback accused of fraud 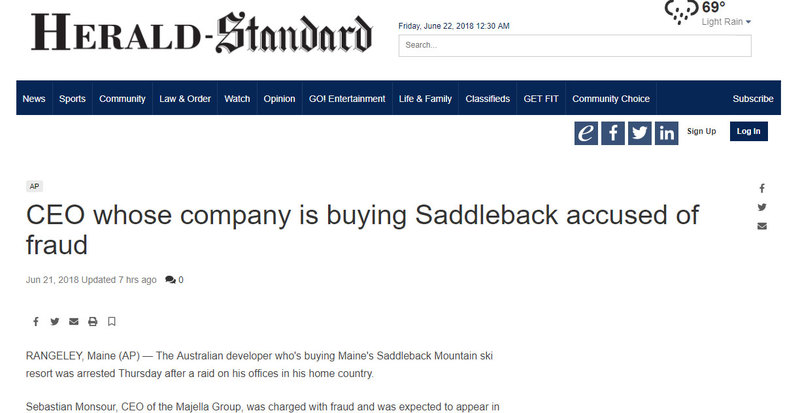 The Australian developer who's buying Maine's Saddleback Mountain ski resort was arrested Thursday after a raid on his offices in his home country.

Sebastian Monsour, CEO of the Majella Group, was charged with fraud and was expected to appear in court on Friday, according to Australian news media. The arrest came after law enforcement officials executed a search warrant at his office in Brisbane, Australia.

Monsour is accused of accepting $5 million from a Chinese but the money did not go to the intended investments, police said.

In Maine, the Rangeley ski resort was closed for three straight seasons before Owners Bill and Irene Berry announced a year ago that they were selling to Majella Group.

Monsour, who was held without bail, promised to make the Saddleback Mountain the "premier ski resort" in North America and to restore 300 seasonal jobs.

Critics have questioned Monsour's intentions after he was quoted in Maine news reports as saying he wanted to buy the ski resort because of the EB-5 program that offers foreigners permanent residency visas if they invest in certain U.S. real estate projects.

Monsour said his comments were taken out of context.

It's unclear if Monsour has an attorney for the fraud case A message left with his company's U.S. offices was not immediately returned.