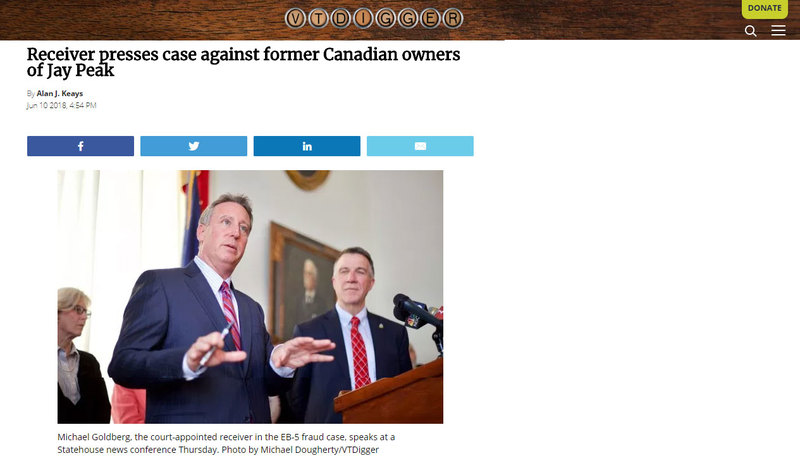 The court-appointed receiver for Jay Peak is pursuing claims against the Canadian company that formerly owned the northern Vermont ski resort.

“In the present action, the Receiver makes claims against SSVR for aiding and abetting fraud, conversion, breach of fiduciary duty, and fraudulent transfer based on participation in Quiros’s fraud,” reads the filing submitted in court on Goldberg’s behalf.

Attorneys for the resort’s former owners, Saint-Sauveur Valley Resorts Inc., take issue with Goldberg’s claims that the Canadian company was “aiding and abetting” the fraud through the sale of the resort.

“Ultimately, this claim amounts to little more than a sham,” the motion to dismiss the case stated.

Attorneys for the company deny the allegations raised in the lawsuit, and have asked the judge to toss the case.

For some time, the parties in the case have traded legal arguments over whether the lawsuit, initially brought on behalf of a group of investors, could go forward against the Canadian company.

Jay Peak, located just miles from the border, is in receivership, as are other properties at the center of the alleged Northeast Kingdom investor fraud scandal.

Saint-Sauveur had previously argued in court documents that the lawsuit should be dismissed because the authority to sue rests with Goldberg, the court-appointed receiver for Jay Peak.

Since that time, Goldberg has joined the lawsuit as the lead plaintiff and is charging ahead.

Goldberg was appointed receiver of Jay Peak in April 2016 when the U.S. Securities and Exchange Commission brought a 52-count civil fraud lawsuit against Quiros and his former business partner, Bill Stenger, the ski report’s former CEO and president.

That SEC filing, as well as well as a separate one brought by state regulators in Vermont, alleged the two men misused $200 million of the more than $350 million they raised through the federal EB-5 immigrant investor program to finance their developments.

The EB-5 program provides U.S. residency to foreign investors who put at least $500,000 into a qualified project that creates 10 jobs. About 800 EB-5 investors from 74 countries were defrauded in the scheme.

In the SEC case, federal regulators say the “Ponzi-like” scheme began when investor money, which was supposed to be held in escrow for two hotel projects, was used by Quiros to buy Jay Peak Resort from Saint-Sauveur Valley Resorts.

That money was to be used for Tram House Lodge, known as Phase 1, and Hotel Jay, Phase II. Quiros and Stenger used it to buy the resort instead, federal regulators have said. After that, new projects were pitched to new investors, but the money was used to backfill costs for construction of Tram House and Hotel Jay. The Ponzi-like scheme continued with seven separate projects, and eventually the money ran out when VTDigger published a story in 2015 about the SEC investigation into the Jay Peak projects.

The plaintiffs suing Saint-Sauveur are EB-5 investors who put money into those two phases of developments and say they were not aware that their money had been used to buy the resort instead.

The plaintiffs who filed suit against Saint-Sauveur included EB-5 investors Tony Sutton, Glyn Moser and Patrick Tawil. They all said at the time they believed they were investing in the first construction projects at Jay Peak.

Goldberg, who represents the interests of all the defrauded investors, has since replaced those investors as the lead plaintiff in the case.

“There is ample alleged conduct alleged in the (the lawsuit) to show a plausible claim that Quiros would never have been able to carry out his scheme had not SSVR handed him the Phase I and Il investor funds to carry out his purchase and that SSVR knew that he might,” the filing stated.

Also, according to the document, Goldberg “alleges that SSVR was unjustly enriched because it knowingly accepted investor funds” as payment for the Jay Peak ski resort, and “facilitated the diversion” of the funds by Quiros and Stenger.

“Plaintiff details in the (lawsuit) how SSVR enriched itself at investors’ expense by transferring investor funds to Raymond James accounts controlled by Quiros; transferring ownership of the Jay Peak resort to Quiros and Stenger without any evidence of financing and for a minimal deposit; and receiving and retaining investor funds from the Raymond James accounts as payment for the resort,” the filing stated.

SSVR was known as Mont Saint-Sauveur International Inc. when it sold the resort to Quiros in 2008.

In June 2008, court records state, Quiros negotiated a stock transfer, with MSSI moving the assets of Jay Peak to his company, Q Resorts. The transfer occurred within hours of Quiros’ purchase of the resort.

According to court records in the SEC case, Quiros had earlier asked MSSI to open brokerage accounts for the Tram Haus Lodge and Hotel Jay projects at the financial services firm Raymond James.

Attorneys for MSSI, at the time of the bank transfers, said in a letter sent to Raymond James, and copied to Quiros and Stenger that money for those EB-5-funded projects “may not be used in any manner, including as collateral or a guarantee, to fund the purchase of the Jay Peak Resort.”

Earlier this year, the SEC settled its case with Quiros for $81 million. And last year, the receiver settled a $150 million settlement in a lawsuit brought against Raymond James & Associates, a financial firm the receiver alleged conspired with Quiros to carry out the fraud.

In settling those claims, Raymond James neither admitted nor denied the allegations.