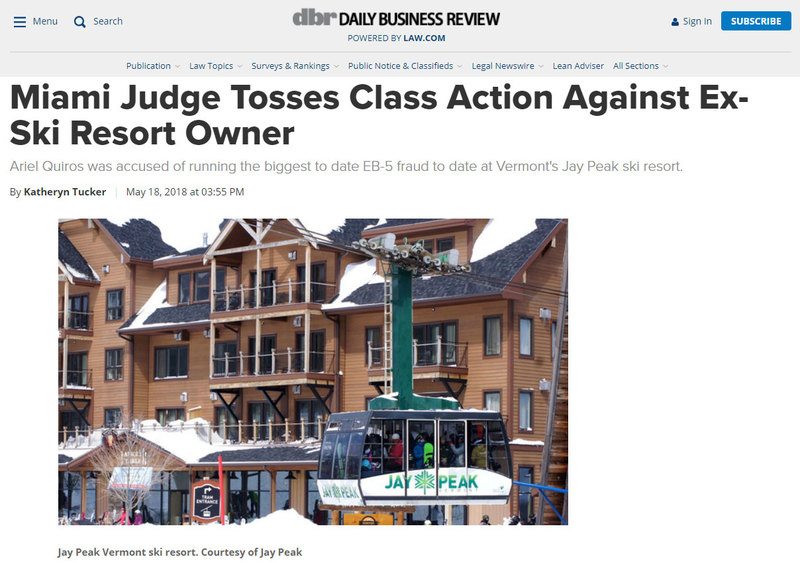 Ariel Quiros was accused of running the biggest to date EB-5 fraud to date at Vermont's Jay Peak ski resort.

A federal judge has dismissed a potential class action against a Miami businessman accused by investors of engineering a $400 million Ponzi scheme tied to fundraising for EB-5 immigrant visas at a Vermont ski resort.

U.S. District Judge Federico Moreno of the Southern District of Florida dismissed an amended complaint Tuesday, saying the plaintiffs lacked standing to sue. Moreno said the plaintiffs’ claims are “derivative under Florida law,” and they have not “sufficiently alleged an injury separate and distinct from other investors.”

Alexandre Daccache and others claimed they were damaged as a result of their investments in Ariel Quiros’ venture at the Jay Peak ski resort, which went into receivership.

The plan involved an EB-5 offering of limited partnership interests to build a hotel, indoor water park, ice rink, golf club and biomedical research center. Eight phases of the venture brought in $418 million from 696 investors. Quiros was accused of running the biggest EB-5 fraud to date.

His attorney, Melissa Damian Visconti of Damian & Valori in Miami, said Friday that Moreno’s order, if it stands on appeal, “ends that lawsuit for our client.”

She said the plaintiffs can still recover losses through a Securities and Exchange Commission settlement under which Quiros satisfied an $81 million judgment by surrendering the resort and another mountain.

The receiver, Akerman’s Michael Goldberg in Fort Lauderdale, will have to sell the properties before the full recovery amount will be known.

“We’re hoping this is a step toward resolving all civil investor litigation against him,” Visconti said. She said Quiros is cooperating with all the parties and “just wants peace.”

Visconti complimented her opponents, a team of lawyers led by Harley Tropin of Kozyak Tropin Throckmorton in Coral Gables.

“It has been such a pleasure working with these lawyers,” she said. “They are great lawyers, true professionals, the best of the best, working in rough circumstances. We battled it out. These are intense legal issues.”

Tropin said Friday, “While we greatly respect Judge Moreno, we’re of course disappointed with the order and are considering what avenues are open to help our clients achieve a better recovery.”

The EB-5 immigrant investor program was created by Congress in 1990 to stimulate the U.S. economy through job creation and capital investment by immigrants funding new commercial enterprises or investing in troubled businesses. The government has made 10,000 EB-5 visas available each year, according to the U.S. Department of Homeland Security website.