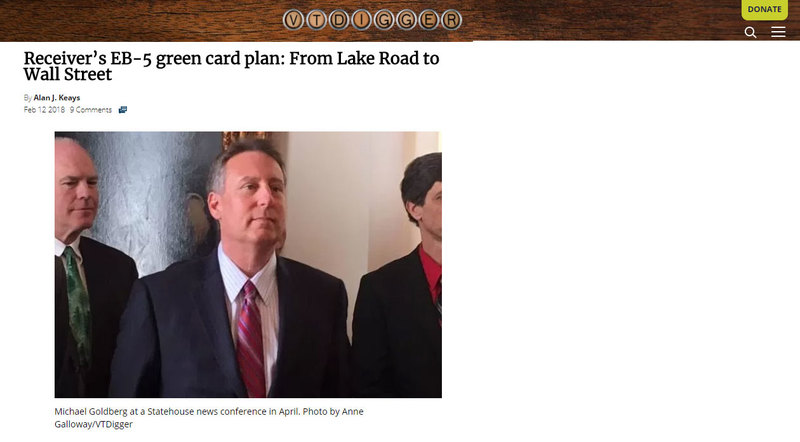 EB-5 investors who lost out on obtaining green cards when a proposed $110 million biomedical research facility in Newport was deemed by regulators “nearly a complete fraud” now have the opportunity to reinvest in a luxury New York City high-rise on Wall Street.

Federal Judge Darrin P. Gayles has approved a plan by Michael Goldberg, the court-appointed receiver for AnC Bio Vermont, to aid defrauded investors. The proposal calls for the “redeployment” of their investments into a different qualified project.

If the proposal is also approved by U.S. Citizenship and Immigration Service, the investors will retain the ability to obtain green cards in a timely fashion. Otherwise they would have to start over with the EB-5 process, which can take 10 years or more.

Goldberg said in an interview that the investors can review the proposal and elect to invest — and stay where they are in the green card queue. It’s the first time a redeployment of EB-5 investments has been approved by a judge, he said.

“This case is setting the roadmap for all EB-5 receiverships and delivers green cards to about 75 people,” Goldberg said. “The court approved it, and we think USCIS should go along with it. It would be another gift to the AnC Bio people.”

Goldberg oversees the Newport property off Lake Road where the biomedical research center was to be located. The property is one of several in Vermont’s Northeast Kingdom he now manages, including the Jay Peak and Burke ski resorts, that are part of the largest alleged EB-5 investor fraud case in the program’s history.

Immigrant investors in the AnC Bio Vermont project could not meet the job creation requirements needed to obtain their green cards because the biomedical research center was never built.

Goldberg, in a recent court filing, outlined how foreign investments in AnC Bio Vermont would be redeployed into a different qualified EB-5 development known as the One Wall Street Project.

One Wall Street is the redevelopment of a 1931 art deco skyscraper, which is being converted into a mixed-use building, according to the filing. The project includes 687,999 net square feet of for-sale condos, for a total of 566 units, as well as 172,331 square feet of retail space, Goldberg wrote.

The building occupies an entire block at the corner of Broadway and Wall Street, next to the New York Stock Exchange. Construction on the project started in November 2015 and is expected to be completed in phases through 2021, the filing stated.

The project is forecast to create 6,409 new jobs, or about 12 jobs per investor based on the maximum 548 investors, Goldberg wrote. That job creation number is higher than the required 10 jobs per investor needed for green cards.

Not all of the AnC Bio investors are eligible to have their funds “redeployed.”

That group of 35 investors is not eligible for the “redeployment” offer since their funds never formally made it into the AnC Bio partnership, and they have already been offered refunds.

That left another 134 EB-5 investors who had put a total of about $67 million into the AnC Bio Vermont project before the state required the developers to hold funds in escrow accounts.

That $150 million settlement includes the $67 million needed to pay for refunds to investors or cover their reinvestments in another qualified EB-5 project.

Goldberg wrote in his recent filing that under his proposal there are 83 investors in the AnC Bio project with approved I-526 petitions and eligible to have their funds redeployed. Of those, 14 have received refunds through the Raymond James settlement, and 17 have not responded to Goldberg’s attempts to contact them.

The remaining 52 have agreed to have their investment funds held in escrow pending their decision to redeploy them in another qualified EB-5 project or have the money refunded.

Initially, Goldberg had planned to allow those investors to choose a qualified project on their own, but later said he discovered that would not be permitted. Instead, a single project had to be selected, he said.

The receiver said after researching potential EB-5 projects currently raising capital, he selected the One Wall Street Project based on “certain economic reports” showing that it will create the needed jobs to cover all the investors.

Regulators with the U.S. Securities and Exchange Commission characterized AnC Bio as “nearly a complete fraud” and accused Quiros of stealing money directly from the early investors in the project.

The SEC brought a lawsuit against Quiros, owner of Jay Peak ski resort, and Bill Stenger, the resort’s former CEO and president, in April 2016.

Regulators allege two men operated a “Ponzi-like” scheme and misused $200 million of the more than $350 million raised for seven out of eight EB-funded development projects, including AnC Bio. In all, the developers brought in $440 million from immigrant investors.

Judge Gayles recently approved a settlement in the SEC case which calls for Quiros to surrender to the federal government $81 million in assets, including his interests in the two ski resorts, as well as $1 million for a cash penalty and another roughly $2 million in pre-judgment interest.

Stenger agreed as part of the settlement to pay a $75,000 penalty.

Both men are under criminal investigation and still face a civil lawsuit brought by state regulators in Vermont.

The use of EB-5 funding to help pay for developments in such affluent areas as Wall Street has drawn criticism over the years from those seeking to reform the immigrant investor program, including Sen. Patrick Leahy D-Vt.

Leahy in the past had been a vocal supporter of the EB-5 program and has close ties to Stenger. However, in recent years he has pushed for reforms in the program that he has said is “rampant” with fraud.

One of Leahy’s main complaints about the EB-5 program is that it has been exploited by developers to build luxury properties in upscale areas.

EB-5 investors are required to put $1 million into a project. However, if a project is in a TEA, or Target Employment Area, investors only need to put up $500,000.

Leahy has said over the years that developers have taken part in the “gerrymandering” of TEA districts to allow for wealthy areas to seek investment funds that undermine the law. The One Wall Street project is in a designated TEA district, despite being located in the financial center of the country.

Speaking last year, Leahy voiced support for proposed changes that included raises the program’s minimum investment requirements, jumping to $1.35 million from $500,000 in rural, high-unemployment rural areas, and to $1.8 million from $1 million for other projects.

Also, he spoke in favor of a new system to be implemented to determine rural high-unemployment areas, seeking to better target those zones rather than benefiting more affluent communities that may be nearby.

“By providing a much-needed increase in investment levels and by reining in abusive gerrymandering practices,” Leahy said at that time, “these changes will help restore the program so it creates meaningful jobs in distressed and rural areas as Congress always intended.”