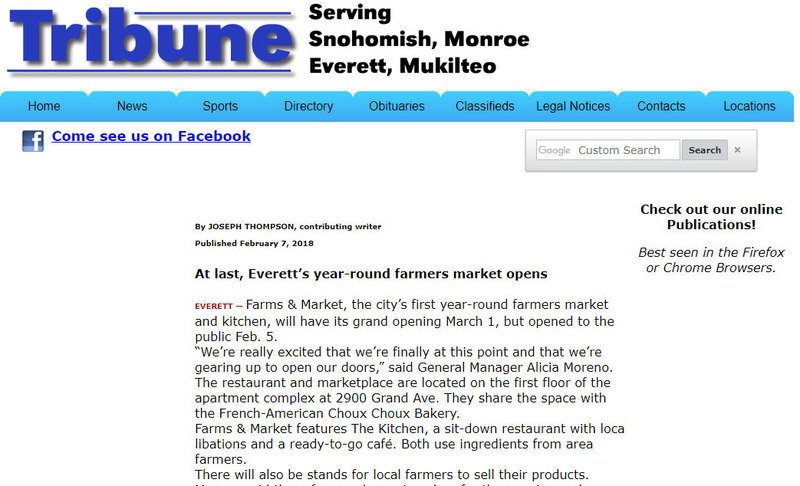 Farms & Market, the city’s first year-round farmers market and kitchen, will have its grand opening March 1, but opened to the public Feb. 5.

“We’re really excited that we’re finally at this point and that we’re gearing up to open our doors,” said General Manager Alicia Moreno.

The restaurant and marketplace are located on the first floor of the apartment complex at 2900 Grand Ave. They share the space with the French-American Choux Choux Bakery.

Farms & Market features The Kitchen, a sit-down restaurant with local libations and a ready-to-go café. Both use ingredients from area farmers.

There will also be stands for local farmers to sell their products. Moreno said three farmers have signed on for the opening and they’re expecting more to join in the following months. Farmers can also drop off produce and other wares for Farms & Market to sell for them.

“We are also working with a number of other farmers where we’re purchasing directly from them,” Moreno said.

Moreno said Farms & Market took steps toward a soft opening “to make sure we are presenting our best selves to the public.”

More than 4,000 people have expressed interest in attending the grand opening on the event’s Facebook page. “In general, people are very excited,” Moreno said. “A lot of people are coming and looking in the windows and asking when we’ll be open.”

The grand opening will be from 4 to 7 p.m., March 1, but won’t be limited to one day.
“Festivities will roll out throughout the weekend,” Moreno said.

The opening will feature live music and speeches from local leaders.

Ryan Crowther, a spokesman, couldn’t confirm specifically who will be performing or speaking, but “regional business and political leaders” as well as Moreno would be there.

The year-round farmers market and apartment complex was first envisioned by developer Lobsang Dargey who wanted to call it “Potala Place,” but after Dargey was convicted of fraud and sentenced to four years in prison, the project was left up in the air. With the apartments built and rented, the market was the incomplete final step. Developer and real estate group EB5 Group LLC bought the building and kept the venture alive.

Farms & Market’s website said it’d be opening in early 2018, but Moreno said issues with construction and permits kept them from establishing a firm date. That isn’t a problem anymore.

“We have all of our permits and everything in order,” Moreno said. “The city says we are ready to open for business.”