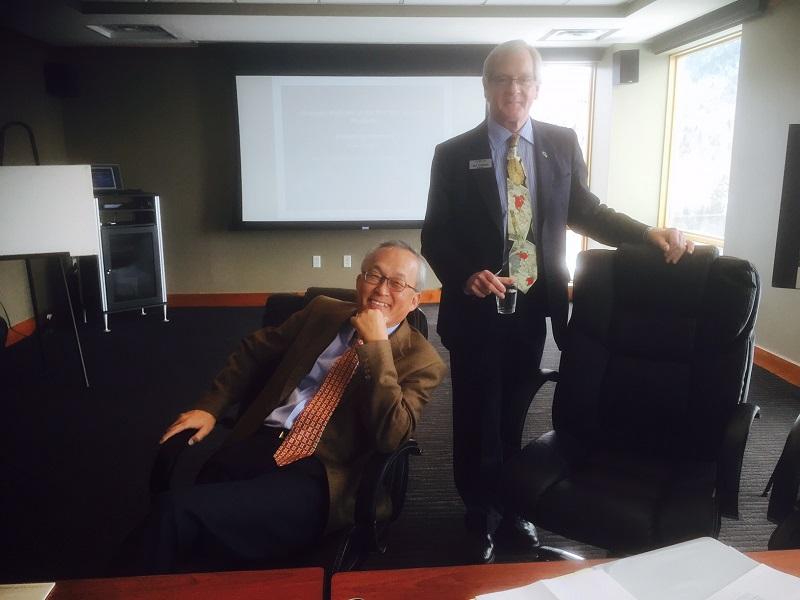 Construction will begin in Newport on May 14 for a biotechnology research and manufacturing center that will be one of the first of its kind in the nation.

The new company, AnC Bio,  will house three different activities: creating stem cell therapies for diseases such as cancer, making heart pumps and liver and kidney dialysis machines and leasing out sterile rooms to other biotech researchers. CEO Ike Lee was trained as a bio-medical researcher in both Korea and the United States. He says federal Food and Drug Administration review of these new biotechnologies has been slow, but now the timing is perfect for a facility that provides production space, marketing and research for fledgling companies near the end of the approval process.

“And now as we are getting many green lights from the government we are really excited to push it forward,” Lee said.

At a press conference at Jay Peak, Lee explained that a forerunner of AnC Bio ran into financial problems several years ago in Korea. Lee said AnC Bio Korea built a research and manufacturing facility several years too soon, believing that stem cell researchers and medical device companies would get the timely approval and the financial backing they needed to move ahead with production. That turned out to be a premature hope.

“We established a beautiful facility in Korea expecting that we would have the products to produce for the global market. That didn’t happen,” Lee said.

The company failed to make payments on its building, which was sold to another landlord. But Lee says bio-medical production is happening there. Meanwhile, AnC Bio Vermont has bought the rights to that same technology which is now, Lee says, finally ripe for the rapidly growing global market. To reach that market, biotech companies, including AnC Bio, need a labor force and production facilities. That, says developer Bill Stenger, is the void the Newport center will fill, well ahead of American competitors.

And he says Vermont is a good place for those 400-450 jobs to be created. About half will be local workers trained to make devices, and the rest will be scientists.

“Because we’re close to major colleges and universities. There are a tremendous number of reasons why living and working in our part of Vermont has value. Safe, clean, environmentally beautiful, a facility that’s state of the art and debt-free,” Stenger said.

Debt-free, in his view, because most of the investors in AnC Bio are not traditional lenders.  They are foreigners who qualify for special visas if each invests a minimum $500,000 that creates at least 10 jobs. Under this federal EB-5 program, investors are not guaranteed a specific payback or time frame.  Still, a biotech market analyst also present at the media briefing predicts they will enjoy healthy returns. Jane Andrews, a health care consultant at the market research firm Frost and Sullivan, says the market for stem cell therapy and replacement organs will boom as baby boomers grow old and infirm.

“There are more 60-year-olds in the world than there are 5-year-olds right now ... It’s incredible how the global population is aging," Andrews said. "So, we will have to have new medical devices and procedures and products such as stem cell therapy to aid our aging population and keep the cost of care down."

The cost of the AnC Bio Project is about $100 million, with $77 million already in hand. The state’s Department of Financial Regulation has said Stenger and his partners may start spending that money on the facility as they seek FDA approval along with the last 40 EB-5 investors. But final state approval is still pending for the overall business plan.