Dargey’s Grand Ave. farmers market dream moves on without him 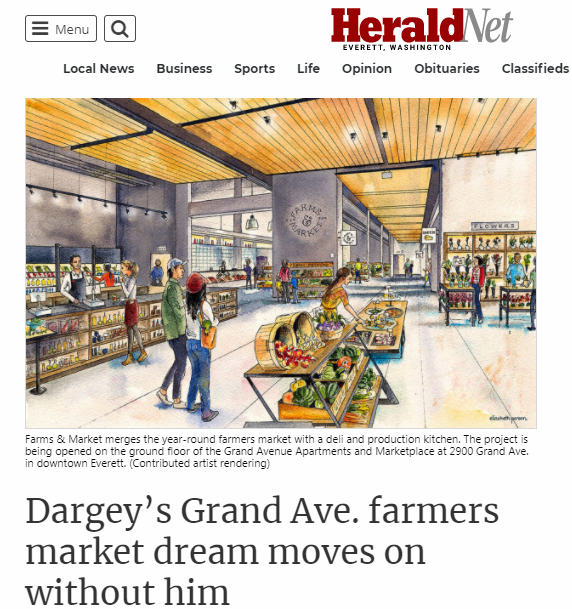 From the very beginning, a year-round farmers market was envisioned to occupy the ground floor of the six-story apartments at 2900 Grand Ave.

Those plans were delayed with the legal troubles of now imprisoned developer Lobsang Dargey.

The new owners of the property are now moving forward with a market along with deli and kitchen.

Farms & Market already is under construction and is expected to open by early next year, said Steve Carlin, the owner of The Carlin Company, which is working on the project.

It will occupy about 7,000 square feet of the 35,000-square-foot retail space at what’s called Grand Avenue Marketplace and Apartments.

The idea is that farmers will be able to lease up to 28 stands in the market and the kitchen will use produce from the market to create meals to be taken away or consumed at the shop.

The site will allow small-scale farmers a place to drop off their produce once a week to be sold by the Farms & Market staff, who will be able to share the history and background of the farms. The market also will sell some other grocery items, such as oils and pasta. It is expected to employ 25.

“There’s all this potential and the area is ripe for this and the farmers are ready for this,” said Alicia Moreno, Farms & Market general manager. “It needs this venue.”

So far, five farmers have committed to selling their goods in the stands. Farms & Market is looking to add more. Part of it is convincing local farmers that the project is moving forward, Carlin said.

“You have to overcome the reputation and the history of this project,” Carlin said. “It started and stopped and started and stopped over the course of many years. We have to rebuild the confidence in the farmers’ community that this is really happening.”

Grand Avenue Marketplace and Apartments was originally called Potala Place when it was being developed by Dargey. But Dargey was caught defrauding investors and misusing tens of millions of dollars. He was sentenced to four years in prison in April.

While his legal case was working its way through the courts, the apartments opened and most are now occupied. But the street-level retail was left in limbo.

A business called EB5 Group based in Las Vegas took control of the property earlier this year, Carlin said. The EB5 Group retained The Carlin Company, based in Napa, California, to create the farmers market.

So far, the only tenant open in the retail space is Choux Choux Bakery, a French bakery which opened last year.

Farms & Market will be the second tenant. It’s being built by Synergy Construction. The cost will be more than $1 million, Carlin said.

The Carlin Company is looking to attract other businesses for the ground floor and is in negotiations with a wine shop, butcher and coffee bar.

Carlin has been working on the Farms & Market concept for about a decade. He had originally been working on it with a developer for the Riverside project along the Snohomish River. He’s excited the project is now coming to fruition.

“It should be a lot of fun and be well received by the community,” Carlin said.