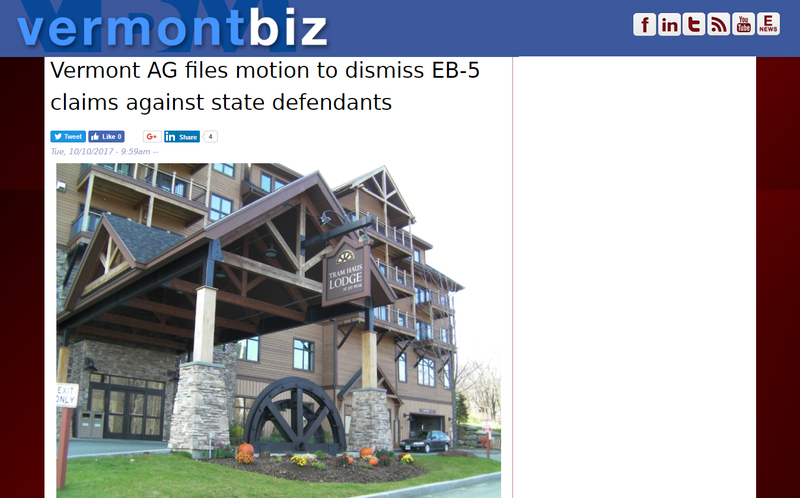 Vermont Business Magazine Attorney General TJ Donovan has asked the Lamoille Superior Court to dismiss a lawsuit brought by five EB-5 investors against the State of Vermont and 10 current and former state employees. Plaintiffs allege that they lost money invested in EB-5 projects run by Bill Stenger and Ariel Quiros. They claim that the State should have supervised these projects more closely and discovered misconduct including the alleged misuse of investor funds by Stenger and Quiros.

The State’s motion and supporting memorandum ask the Court to dismiss the complaint in its entirety. The memorandum argues that the claims against the individual Defendants should be dismissed based on legal principles that protect public employees who act in good faith within the scope of their employment. These protections are integral to the functioning of state and local government. They allow public employees to faithfully perform their duties without fear of reprisal or civil liability for every decision they make.

The memorandum also argues that the claims against the State itself have not been authorized by the Vermont Legislature. The Vermont Tort Claims Act allows persons harmed by state action to bring lawsuits against the State – subject to certain conditions and dollar limits. The memorandum argues that none of Plaintiffs’ claims satisfy the requirements of the Act, which is modelled on a federal law that has been copied by most states.

Also, the memorandum argues that the Complaint fails to satisfy Vermont’s pleading standards because it does not put Defendants on notice of any of the specific claims against them. For example, the Complaint does not specify any fraudulent activity by any Defendant. Finally, the State’s memorandum argues that the Complaint is expressly barred by the federal court order that appointed the Receiver in the SEC’s lawsuit against Quiros and Stenger. That order gives the Receiver “exclusive” authority to pursue claims for the benefit of investors.

The AG’s memo states that the Plaintiffs in this action are five investors who, over a period of more than seven years, invested in two VRC projects at Jay Peak Resort that are unrelated except for the principals who ran them: Bill Stenger (president) and Ariel Quiros (owner).

Stenger and Quiros are alleged, in state and federal enforcement actions brought in April 2016, to have engaged in a massive, secret, “Ponzi-like” scheme to misuse and misappropriate millions of dollars in foreign investor funds, including the funds of Plaintiffs.

Defendants are the Vermont Agency of Commerce and Community Development (ACCD), the Vermont Department of Financial Regulation (DFR) and the Vermont Regional Center (VRC), along with 10 individual current and former state employees who are alleged to constitute the “VRC Team.”

Plaintiffs are also putative representatives of a class of other investors from all of the Stenger/Quiros projects.

Their claims boil down to the assertion that various state entities and employees made misleading statements about the Stenger/Quiros projects, and did not adequately perform discretionary functions or timely discover and pursue Stenger and Quiros’s alleged frauds.

The memo states in part: “In addition, dismissal is warranted because Plaintiffs’ Complaint fails to satisfy Vermont’s pleading standards. Although the Complaint includes multiple fraud claims, nowhere does it allege that any Defendant did or said anything specific to any particular Plaintiff at any particular time. Instead, the Complaint attempts to rely on the sort of vague, generalized allegations that courts have uniformly found insufficient under Rule 9(b) and securities law. Indeed, despite all its length, the Complaint also fails to meet even the minimal standards of Rule 8, because it fails to meaningfully put any individual Defendant on notice of the factual basis for alleging liability as to any particular individual. Moreover, even if Plaintiffs’ allegations were adequate to meet Vermont’s pleading standards, they are not sufficient to state any viable causes of action against Defendants under Vermont law.”

The parties have agreed that Plaintiffs’ deadline for responding to the State’s motion is January 8, 2018.