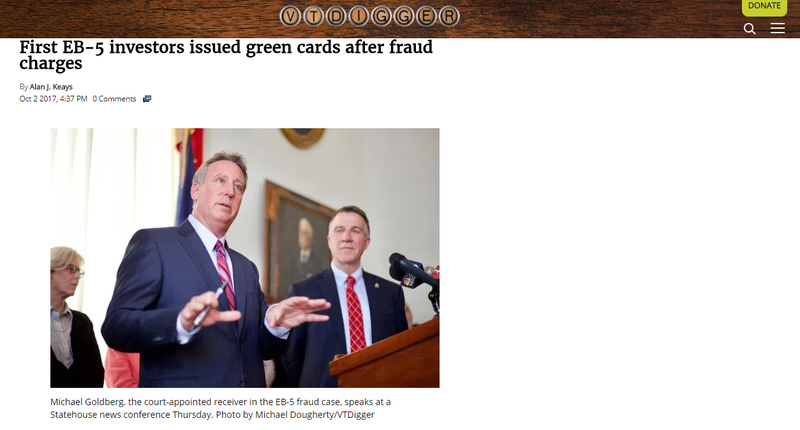 Ten people have become the first defrauded EB-5 investors in the Jay Peak Resort projects to obtain permanent U.S. resident status since the properties at the center of the case went into receivership more than a year ago.

Michael Goldberg, the receiver who has been overseeing the properties, including Jay Peak and Burke Mountain ski resort, posted a notice last week that U.S. Citizenship and Immigration Services had approved 10 “unconditional,” or permanent green cards, for 10 investors in the Stateside project at Jay Peak.

“To the best of my knowledge, these are the first petitions USCIS has approved related to any Jay Peak/Burke project since the inception of the receivership nearly a year and a half ago,” Goldberg wrote in the notice. “This is a very good sign and I want to personally thank USCIS for its hard work and its apparent willingness to move forward in considering our investors’ petitions.”

Goldberg was appointed receiver in April 2016 by a federal judge after the U.S. Securities and Exchange Commission leveled an investor fraud lawsuit against Jay Peak’s owner Ariel Quiros and the resort’s former president, Bill Stenger.

The SEC and state regulators in a separate legal action accused Quiros and Stenger of misusing $200 million of the more than $400 million raised from investors through the federal EB-5 immigrant investor program meant to fund a series of projects, including massive upgrades at Jay Peak.

More than 800 foreign investors from 74 countries each put up at least $500,000 in EB-5 projects proposed by the developers of Jay Peak. Each investor hoped to become eligible for permanent U.S. residency in exchange for the investments.

The alleged fraud at Jay Peak put the immigration status of roughly half of the investors in jeopardy. That’s because several of the projects, including AnC Bio Vermont and the Stateside condos, were not finished and promised job creation targets, required by the U.S. Citizenship and Immigration Service, were not met.

Over the past year, Goldberg has made finishing the Stateside condos at Jay Peak a priority in an effort to meet the job targets and help dozens of investors in the projects to obtain citizenship.

With funds from a recent settlement, work began this summer to complete the Stateside condo village project at Jay Peak, known as Phase VI.

Goldberg reached an agreement with Raymond James & Associates Inc. earlier this year to settle claims that the financial services assisted Quiros in diverting investor funds. Raymond James, which admitted no wrongdoing as part of the settlement, agreed to pay the receivership $150 million.

About $20 million of the Raymond James settlement went to finish the Stateside project.

Goldberg said he wasn’t exactly sure why the USCIS started to process the green cards now. He did say that he believed work that began this summer to finish the Statewide project was a factor.

“I know they are aware of that and I assumed that played a part in it,” the receiver said.

Goldberg said in a recent interview that when the receivership began in April 2016 USCIS “completely” stopped administering investor petitions associated with the projects headed by Quiros and Stenger.

“I guess (USCIS) has reached a point where they are comfortable that we have turned it around,” the receiver said. ”That’s a very good sign they are not putting this global veto on everyone coming through with any of the Jay Peak projects.”

The developers started to run out of funding in 2014, and by the time the SEC filed its investor fraud lawsuit in April 2016 about 400 investors in three incomplete projects had not received those green cards.

Investors who have not received that status include about 120 who put money into the Burke Mountain Hotel & Conference Center project, which opened last year, as well as another 75 investors in the Stateside project, Goldberg said.

Also, most investors in a failed project headed by the two developers to build a proposed $110 million biomedical research center in Newport won’t be able to get their green cards for their investments in that project.

Many of investors in that AnC Bio Vermont project have been offered the option of a refund of their $500,000 investment, or to have that money “redeployed” into a different EB-5 project as a way to obtain their green cards.

About 35 of those AnC Bio investors received their money back and are not eligible for green cards because their funds were held in an escrow account and never spent after questions were raised about the practices of the developers.

“We’re going to try to help as many as we can,” Goldberg said of those investors still seeking “unconditional” green cards. “The money part we’ve been dealing with for the past year and half, and now this part appears to be moving in the right direction, too.”