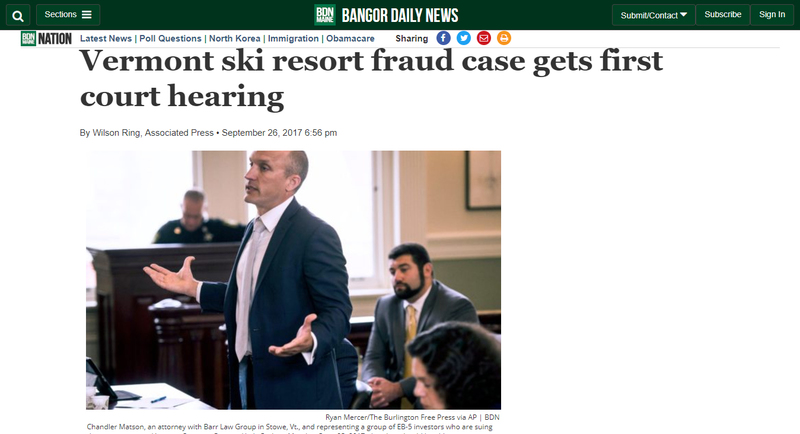 Chandler Matson, an attorney with Barr Law Group in Stowe, Vt., and representing a group of EB-5 investors who are suing the state, argues in Vermont Superior Court in Hyde Park on Monday, Sept. 25, 2017, that they should be able to interview witnesses in formal depositions to preserve information critical to their claims that the state mismanaged the EB-5 program. The state of Vermont is planning to file a motion to dismiss the case early next month claiming it and all its employees should be immune from the civil suit filed by a number of people who invested in the Jay Peak ski resort.

A Vermont judge on Monday began weighing some of the legal issues that could decide if the state can be held liable for losses in a ski resort fraud case that cost foreign investors millions of dollars and potentially the opportunity to live in the U.S.

Vermont intends to ask the court to dismiss the case early next month, claiming it and all of its employees should be immune from the lawsuit filed by people who invested in the Jay Peak ski resort.

But lawyers for the people who lost money want the court to allow them to begin questioning witnesses in the case under oath while awaiting the court’s ruling on immunity.

After the hearing, Russell Barr, one of the attorneys for the group suing the state, and some of the state employees who were working on the program said Vermont was giving the wrong interpretation of the immunity doctrine because the Jay Peak investments were run in the same manner as private business, not governmental activities which are immune.

“You can’t take a private enterprise business and then say it’s under the state shield, commit all this fraud … and then somehow suggest we’re immune,” he said. “No, not in America.”

Jay Peak’s leadership was accused last year of misusing more than $200 million raised from foreign investors through the federal EB-5 visa program for developments at or near the ski resort. The program allows overseas investors to obtain U.S. residency in exchange for investments of $500,000 in approved projects.

A number of foreign investors sued Vermont. The lawsuit alleges the Vermont Regional EB-5 Center, which worked on the projects, and Jay Peak were essentially partners in fraud.

Last month a lawyer for Miami businessman Ariel Quiros, who owns Jay Peak Resort, said Quiros would not contest charges filed against him by the U.S. Securities and Exchange Commission. He is not admitting or denying any of the SEC charges and will focus on the amount of damages that will be paid.

There was no indication when the judge would rule on the state’s request to dismiss the lawsuit.