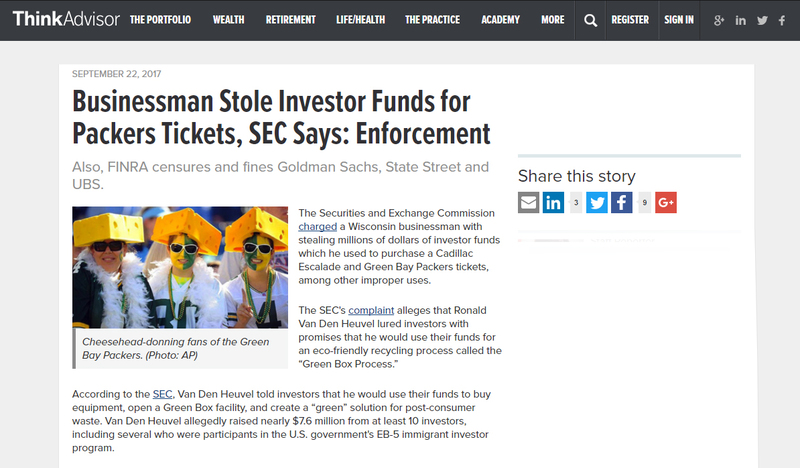 The Securities and Exchange Commission charged a Wisconsin businessman with stealing millions of dollars of investor funds which he used to purchase a Cadillac Escalade and Green Bay Packers tickets, among other improper uses.

The SEC's complaint alleges that Ronald Van Den Heuvel lured investors with promises that he would use their funds for an eco-friendly recycling process called the “Green Box Process.”

According to the SEC, Van Den Heuvel told investors that he would use their funds to buy equipment, open a Green Box facility, and create a “green” solution for post-consumer waste. Van Den Heuvel allegedly raised nearly $7.6 million from at least 10 investors, including several who were participants in the U.S. government's EB-5 immigrant investor program.

Instead of using the investors' funds for the Green Box Process, the SEC alleges that Van Den Heuvel used over $3.9 million in investor funds to make unauthorized personal purchases, and pay unrelated business expenses.

Aside from allegedly using investor funds to buy a Cadillac Escalade and Green Bay Packers tickets, he also used investor funds to pay overdue taxes to the state of Wisconsin and the IRS, to pay his ex-wife and mother-in-law, and to pay an outstanding judgment.

Van Den Heuvel also allegedly lied about the Green Box Process in order to attract funds from investors, including by telling investors that tax-exempt bonds would provide approximately $95 million to $125 million in financing when he knew that the state of Michigan had all but denied the bond application.

The SEC's complaint seeks permanent injunctions, disgorgement plus prejudgment interest, and civil penalties. In a parallel action, on Wednesday, the U.S. Attorney for the Eastern District of Wisconsin announced criminal charges against Van Den Heuvel.

The Securities and Exchange Commission suspended trading in a company amid questions surrounding its statements about sending response teams and equipment to help with Hurricane Harvey disaster recovery efforts in Houston and surrounding areas.

The SEC's trading suspension order says that a recent press release issued by Texas-based Grupo Resilient International claimed that the company added a “FEMA approved contractor” to the board of its subsidiary and was deploying workers and preparing to deploy a network of mobile broadband trailers to assist in relief efforts.

The SEC’s order also says there are questions regarding the adequacy and accuracy of statements made by the company on other matters in prior press releases. Grupo was previously known as Paradise Ridge Hydrocarbons and trades under the ticker symbol GRUI.

“This is further reminder of the need for vigilance when investing in penny stock companies, especially when they are being touted in connection with humanitarian aid during a natural disaster such as Hurricane Harvey,” Stephanie Avakian, co-cirector of the SEC's Division of Enforcement, said in a statement. “Investors are reminded to keep on the lookout for schemes that seek to attract people who are eager to invest with companies that genuinely provide assistance to those in need.”

Under the federal securities laws, the SEC can suspend trading in a stock for 10 days and generally prohibit a broker-dealer from soliciting investors to buy or sell the stock again until certain reporting requirements are met.

Earlier this month, the SEC issued an alert that warned investors to be vigilant for investment scams related to Hurricanes Harvey and Irma, noting that scam artists often exploit the latest crisis in the news cycle to lure investors into supposedly promising investment opportunities.

Goldman Sachs & Co. LLC was censured and fined a total of $2.5 million – of which $1.435 million is payable to the Financial Industry Regulatory Authority – for failing to report more than 16,700 over-the-counter options positions in at approximately 6.8 million instances to the Large Options Positions Reporting (LOPR) system.

The firm also failed to report an unknown number of intraday positions.

According to the disciplinary action, Goldman is required to address its LOPR deficiencies and ensure that it has implemented controls and procedures that are reasonably designed to achieve compliance with the applicable rules and regulations.

State Street Global Markets was censured, fined $1.5 million and required to conduct a review of its relevant policies and procedures, according to FINRA’s disciplinary actions.

Without admitting or denying the findings, the firm consented to the sanctions and to the entry of findings that it failed to maintain electronic brokerage records in write once read many (WORM) format.

The vast majority of these records were unexecuted orders placed by institutional clients through the firm’s alternative trading system (ATS). The findings also stated that the firm failed to store separately from the original, duplicate copies of approximately 244.5 million records of orders placed by its customers, records of orders executed by the firm and electronic communications.

Without admitting or denying the findings, UBS consented to the sanctions and to the entry of findings that it effected customer transactions in a municipal security in an amount lower than the minimum denomination of the issue which were not subject to an exception under the rule.

The findings also stated that the firm’s supervisory system did not provide for supervision reasonably designed to achieve compliance with respect to the applicable securities laws and regulations, and the Municipal Securities Rulemaking Board (MSRB) rules, concerning municipal securities transactions effected on behalf of a customer below an issue’s minimum denomination as stated on relevant offering statements.

The Securities and Exchange Commission obtained a final judgment against eight entities that a former Connecticut-based fund manager whom the agency charged with perpetrating a years-long, multimillion-dollar Ponzi scheme, used to defraud investors.

The judgment, which the entities agreed to without admitting or denying the SEC's allegations, does not order disgorgement or penalties against the entities based on the court-appointed receiver's four distributions of recovered assets totaling over $330 million to defrauded investors and creditors.

To date, the majority of claimants have received back 92% or 100% of their verified losses.

The SEC charged the former CEO of a Silicon Valley-based fiber optics company with insider trading in company stock by using secret brokerage accounts held in the names of his wife and brother.

The SEC alleges that Peter C. Chang, who also was the founder and chairman of the board at Alliance Fiber Optic Products, generated more than $2 million in illicit profits and losses avoided by trading on nonpublic information and tipping his brother ahead of two negative earnings announcements and the company’s merger.

According to the SEC’s complaint, Chang was the company’s largest shareholder and was required under the federal securities laws to disclose his ownership of company securities as an officer and director. Chang allegedly traded company shares secretly in the family member accounts, often times from his work computer after attending board meetings where confidential information was discussed. He also allegedly tipped his brother in Taiwan with nonpublic information to trade ahead of the earnings announcements in 2015 and an announcement in 2016 that the company would be acquired via tender offer by Corning.

Chang allegedly tried to hide his control over one of the accounts by posing as his brother in communications with one of the brokerage firms, and he allegedly obscured his relationship with his wife in response to a market surveillance inquiry by the FINRA.

The complaint seeks disgorgement with prejudgment interest plus a penalty, permanent injunction, and officer-and-director bar. In a separate action by the U.S. Attorney’s Office for the Northern District of California, criminal charges were unsealed against Chang.