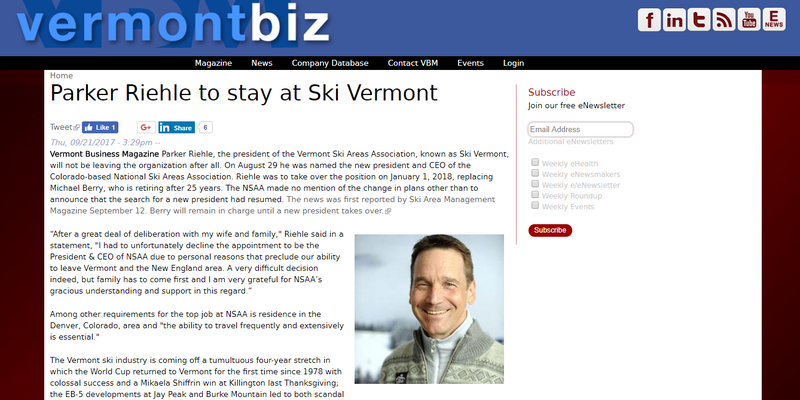 Vermont Business Magazine Parker Riehle, the president of the Vermont Ski Areas Association, known as Ski Vermont, will not be leaving the organization after all. On August 29 he was named the new president and CEO of the Colorado-based National Ski Areas Association. Riehle was to take over the position on January 1, 2018, replacing Michael Berry, who is retiring after 25 years. The NSAA made no mention of the change in plans other than to announce that the search for a new president had resumed. The news was first reported by Ski Area Management Magazine September 12. Berry will remain in charge until a new president takes over.

“After a great deal of deliberation with my wife and family," Riehle said in a statement, "I had to unfortunately decline the appointment to be the President & CEO of NSAA due to personal reasons that preclude our ability to leave Vermont and the New England area. A very difficult decision indeed, but family has to come first and I am very grateful for NSAA’s gracious understanding and support in this regard.”

Among other requirements for the top job at NSAA is residence in the Denver, Colorado, area and "the ability to travel frequently and extensively is essential."

The Vermont ski industry is coming off a tumultuous four-year stretch in which the World Cup returned to Vermont for the first time since 1978 with colossal success and a Mikaela Shiffrin win at Killington last Thanksgiving; the EB-5 developments at Jay Peak and Burke Mountain led to both scandal and success; two of the best ski seasons in Vermont's history and also one of the worst; the commingling of ski passes with the large resorts out West; the buying of Stowe Mountain Resort's ski operation by Vail; and the acquisition of Stratton by Aspen.

The ski industry generates over $1.6 billion in direct and indirect spending in Vermont and drives the state’s $2.6 billion tourism industry.

Ski Vermont (Vermont Ski Areas Association/VSAA) is a private not-for-profit trade association founded in 1969 to help create a legislative, economic and social environment in which the state's ski industry can grow and prosper, addressing issues including environmental integrity, economic and social contributions to the state's welfare, and competitive positioning of the state as a destination for winter tourism. Ski Vermont serves its 20 Alpine and 30 Nordic member resorts in three major areas: Governmental Affairs, Marketing and Public Affairs.

NSAA was initially formed in June of 1962. Member resorts now account for over 90% of the 57 million annual skier/snowboarder visits and generate annual revenues of approximately $7.2 billion. The NSAA has an annual budget of $4.2 million.

The National Ski Areas Association represents 303 alpine resorts that account for more than 90 percent of the skier/snowboarder visits nationwide. Additionally, it has 370 supplier members who provide equipment, goods, and services to the mountain resort industry. NSAA analyzes and distributes ski industry statistics; produces annual conferences and tradeshows; produces a bimonthly industry publication; and is active in state and federal government affairs. The association also provides educational programs and employee training materials on industry issues including OSHA, ADA and NEPA regulations and compliance; environmental laws and regulations; state regulatory requirements; aerial tramway safety; and resort operations and guest service. The association's primary objective is to meet the needs of ski area owners and operators nationwide and to foster, stimulate and promote growth in the industry.