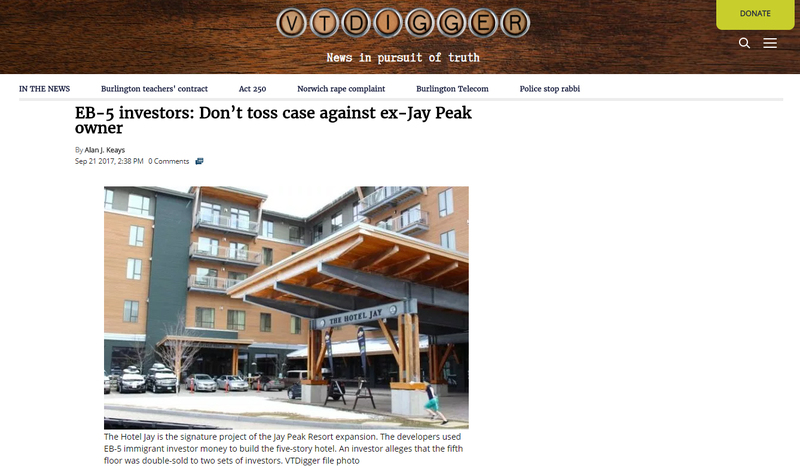 Three EB-5 investors are challenging a bid to throw out a lawsuit brought against a Canadian company they say “aided and abetted” an alleged fraud scheme at Jay Peak Resort.

Saint-Sauveur Valley Resorts Inc. asked a judge to dismiss the case in July.

The plaintiffs in the case claim the company knowingly accepted $15 million in EB-5 funds from Miami businessman Ariel Quiros to buy Jay Peak in 2008.

Quiros’ purchase of Jay Peak from Saint-Sauveur is at the center of an alleged $400 million Ponzi scheme. Federal regulators say Quiros used money from EB-5 investors to buy the resort from Saint-Sauveur, in violation of investor agreements in which money was to be held in escrow for construction of two hotels at the resort. Plaintiffs argue that Saint-Sauveur was aware that Quiros was using the investors’ money improperly.

Lawyers for the company denied the allegation and argue the lawsuit should be tossed on several grounds, including that the investors lack standing to bring it.

However, attorneys for the three investors recently submitted their response, disputing the company’s contentions, arguing that their clients do have the required standing to allow the case to proceed.

U.S. District Judge Christina Reiss is set to hear further arguments on the matter on Nov. 15 in federal court in Burlington.

The suit against Saint-Sauveur was brought in April by EB-5 investor Tony Sutton and a second, anonymous investor, both of whom said they thought they were investing in the hotel projects.

An amended complaint filed in the case in May now lists three investors, including Sutton, Glyn Moser and Patrick Tawil.

Saint-Sauveur is disputing whether those three investors can bring the suit, arguing in court filings that only Michael Goldberg, the court-appointed receiver now overseeing Jay Peak Resort and many other assets at the center of the fraud case, can file such an action.

“The Receivership Order specifically prohibits derivative actions on behalf of Limited Partnership,” David Pocius, a Burlington attorney representing Saint-Sauveur, wrote in a filing to dismiss the case, adding, “Instead, it vests such authority solely in the Receiver.”

If the investors could bring suit, Pocius wrote in the filing, they can only do so in the federal court in Miami, where the U.S. Securities and Exchange Commission case is pending against Quiros and his one-time partner, Bill Stenger, a former employee of Saint Saveur who managed the Quebec company’s EB-5 program and later became president and CEO of Jay Peak.

“Under no circumstances can Plaintiffs file suit in this court,” Pocius wrote, referring to federal court in Vermont. “The Receivership order states that the District Court for the Southern District of Florida shall retain jurisdiction of this matter for all purposes.”

Keith Miller, a Boston attorney representing the three investors, contended in his recent court filing that the “matter” referred to in that order relates to the SEC case pending in the federal court in Florida, not other actions as well.

“(Saint-Sauveur) also points to provisions in the ‘Receivership Order,’ which grant the Receiver the authority to manage the affairs of the Limited Partnerships,” Miller wrote. “These provisions do not deprive this Court of jurisdiction over an action relying on Vermont law properly filed in this Court.”

Miller also wrote that a “written demand” was made to Goldberg, the receiver, to bring a lawsuit, but he declined.

“The fact that the Receiver could have brought an action on behalf of the Limited Partnerships does not preclude the limited partners from filing a derivative action against a liable third party when the Receiver refuses to do so,” the attorney wrote. “Plaintiffs have an absolute right under Vermont law to bring this derivative action.”

Goldberg said late Wednesday afternoon that he is still reviewing whether he’ll be taking action against Saint-Sauveur.

“We’re investigating,” he said. “We don’t run and file lawsuits before we’ve had a chance to investigate.”

Goldberg said he believed that the statute of limitations issue wouldn’t prevent such an action.

“We’re fine because we can come in under their limitations period, if we want to,” the receiver said, referring to the investors’ case. “They filed as a derivative-type suit so I can substitute in as a plaintiff if I want to.”

Issues under review, Goldberg said, are what damages there would be, if any, and, whether the Canadian company is liable.

Goldberg said he expected a decision on the matter within the next week to 10 days.

Asked if he believed that the investors have standing to bring their suit, the receiver replied, “We’re still evaluating that. I’m actually reviewing documents right now.”

Goldberg was appointed receiver by federal Judge Darrin P. Gayles in April 2016 when the SEC brought its case against Quiros and Stenger.

The SEC accused the two men of misusing $200 million in funds raised through the EB-5 immigrant investor program for a series of development projects at Jay Peak and nearby communities. The two men also face a state lawsuit, filed against them by the Vermont Department of Financial Regulation, raising similar allegations.

In the SEC case, federal regulators say the two men perpetrated a “Ponzi-like” scheme that began by using investor money, which was supposed to be held in escrow for the hotel projects, to buy Jay Peak Resort from Saint-Sauveur Valley Resorts.

Quiros and Stenger subsequently had to acquire additional investor funds to backfill projects, setting up the “Ponzi-like” system where the developers were taking money from investors, according to the SEC lawsuit.

The lawsuit brought by Sutton and the two other investors alleges that the Canadian company had knowledge of what the two developers were doing and illegally accepted as payment for the resort the money that was supposed to pay for the Tram House and Hotel Jay projects at Jay Peak.

The Canadian company, in an affidavit, denied knowing of the fraud scheme and any use of EB-5 money by Quiros to buy the resort.

The SEC, in its case filed against Quiros and Stenger, blamed those two for the transaction, and did not allege Saint-Sauveur played any role in an illegal fund transfer.

However, the investors’ lawsuit claims otherwise, pointing out that the Canadian company did not have “a written letter of intent or other agreement” and did not ask for proof that the Quiros had the money to make the $23.5 million purchase, which included $8 million in assumed debt.

The lawsuit says investors should get their money back, and that it should come from Saint-Sauveur.