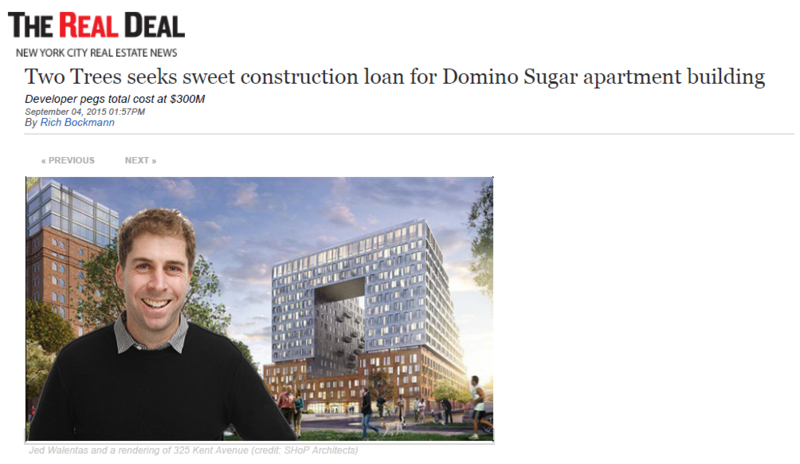 Two Trees Management is close to securing a construction loan for the mixed-income apartment project at the iconic Domino Sugar Factory site in Williamsburg, which the company estimates will cost roughly $300 million to develop.

The Dumbo-based firm is turning to the state’s Housing Finance Agency for a $180 million loan backed by tax exempt bonds for the 80/20 rental building at 352 Kent Avenue, where Two Trees has agreed to set aside 104 of the building’s 522 units as affordable housing.

The mortgage loan, which has a term of 35 years including a three-year construction period, will be backed primarily by the New York City Housing Development Corporation, which will sell the bonds to M&T Bank.

Set to rise along the East River in Williamsburg, the building has been a long time coming.

Two Trees hit a snag in early 2014 when Mayor Bill de Blasio pushed for more affordable units, one of the first big land-use fights the left-leaning progressive took on.

Jed Walentas, of Two Trees, announced in March it was breaking ground on 325 Kent, which the company estimates will cost $296.7 million to develop. That figure includes the price of land as well as hard and soft-construction costs.

When complete, the entire campus will include some 2,300 apartments and about 500,000 square feet of commercial space.

State housing officials project that by 2029, 325 Kent will have a net operating income of $18 million, with about $4.7 million of cash left after servicing the debt.