Former Domino Sugar site will be boon for jobs, economy 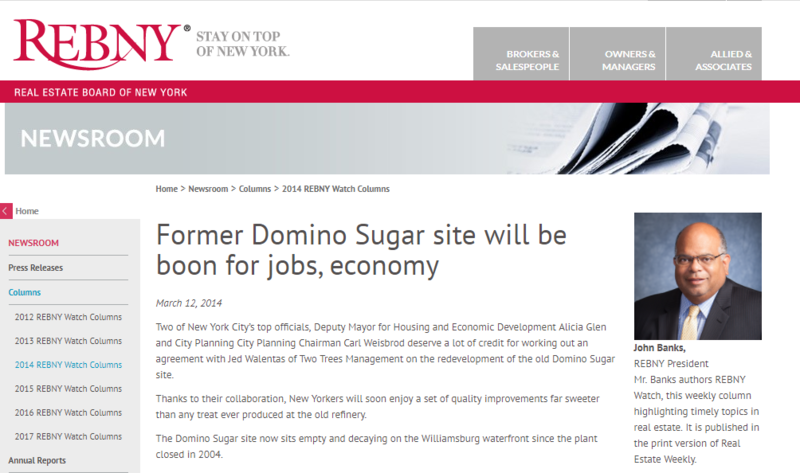 Two of New York City’s top officials, Deputy Mayor for Housing and Economic Development Alicia Glen and City Planning City Planning Chairman Carl Weisbrod deserve a lot of credit for working out an agreement with Jed Walentas of Two Trees Management on the redevelopment of the old Domino Sugar site.

Thanks to their collaboration, New Yorkers will soon enjoy a set of quality improvements far sweeter than any treat ever produced at the old refinery.

The Domino Sugar site now sits empty and decaying on the Williamsburg waterfront since the plant closed in 2004.

Under the agreement approved by the City Planning Commission last week, the site will be transformed into a dynamic mixed-income and mixed-use community where New Yorkers can walk to work and the public can experience a spectacularly reimagined waterfront. The plan now moves on to the City Council and we urge the Council to enthusiastically vote to approve this important project.

The rebirth of Domino will be dramatic: Two Trees will build a complex of offices, retail space and nearly 2,300 apartments. 700 affordable apartments will cover a range of incomes, including a significant number of units sized for families. This development will bring 2000 permanent jobs back to the site.

To complete a smart and sharp design of the 11 acre site, Two Trees will create 5 new acres of parkland and open space for the public to enjoy.

Two Trees has been preparing the site for development for about a year and they plan on breaking ground on the first building late this year. The work on the first building will mark the start of what will be a steady stream of tax revenue and good jobs generated at the now vacant and crumbling Domino factory. Rendering of the Two Trees plan for the site

That steady stream of funding for the City is the topic of a comprehensive new study titled, “The Invisible Engine: The Economic Impact of New York City’s Real Estate Industry.”

The study shows that revenue-generating properties represent 38 percent of the city’s tax revenue and the total economic impact of the real estate industry’s activities was an enormous $106.2 billion in jobs, wages and output— including approximately 13 percent of the Gross City Product.

The crucial agreement on Domino combined with the report’s findings drive home the point that we can and we must continue to build and generate a larger piece of the pie for the residents of the city of New York so they can have more of the services that make New York a great place to live, work, and raise a family.