Jay Peak Receiver Has Lots on His Plate After Partial Settlement 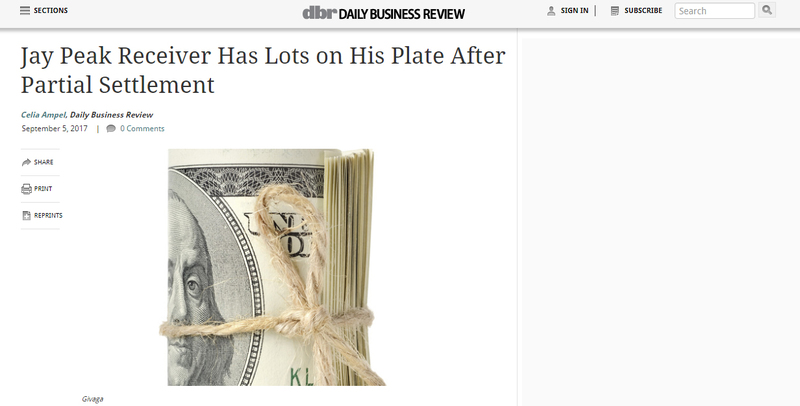 A Fort Lauderdale attorney assigned to protect immigrant investors in the Jay Peak ski resort fraud has distributed about $10 million, with more likely to come since the resort's owner agreed not to fight the allegations.

Ariel Quiros agreed Aug. 22 not to challenge claims from the U.S. Securities and Exchange Commission that he misused $200 million in EB-5 investor funds meant for a Vermont ski resort and associated projects. Quiros has agreed to a permanent injunction that will bar him from selling securities or participating in the EB-5 program. The program, run by U.S. Citizenship and Immigration Services, allows investors to obtain a visa by funding at least 10 full-time positions at a new commercial enterprise.

Quiros' agreement with the SEC does not include any admission of wrongdoing, and the parties have yet to negotiate the amount of any disgorgement or penalties.

Michael Goldberg, a partner at Akerman who is the court-appointed receiver for Jay Peak, had a busy summer after the financial services company Raymond James Financial Inc. agreed to pay $150 million to fraud victims. The agreement settled claims that Raymond James employees helped Quiros and his business partner divert investor funds.

The receivership has paid a $5.1 million trade debt in full and distributed $2 million to contractors who were owed for work done on the Stateside Hotel, Goldberg said Tuesday.

Investors in ANC Bio—a biomedical facility that won't be completed—have received $500,000 each if they requested their funds be returned, Goldberg said. The distributions total about $10 million so far.

Goldberg said his key focus now is to make sure the two hotels that were part of the project create enough jobs to allow the investors to secure green cards through the EB-5 program as intended.

"This is an extremely important aspect of this case as the immigration issues are just as important as the money to many investors," Goldberg said in an email.

The $20 million Stateside project is set to finish construction by the end of the year, Goldberg said. The project includes 60 cottages, a recreational center and lacrosse and soccer fields.

The only pending litigation in the case is the lawsuit against Quiros, Goldberg said, but other companies are in talks to provide funds to the receivership.

"We have numerous tolling agreements in place and we are speaking with several potential targets about a possible resolution of our claims," he said.

U.S. District Judge Darrin Gayles of the Southern District of Florida in Miami presides over the SEC case. Miami-based SEC attorneys Christopher Martin and Robert Levenson represent the government agency, and Quiros is represented by Melissa Visconti and Melanie Damian of Damian & Valori in Miami.