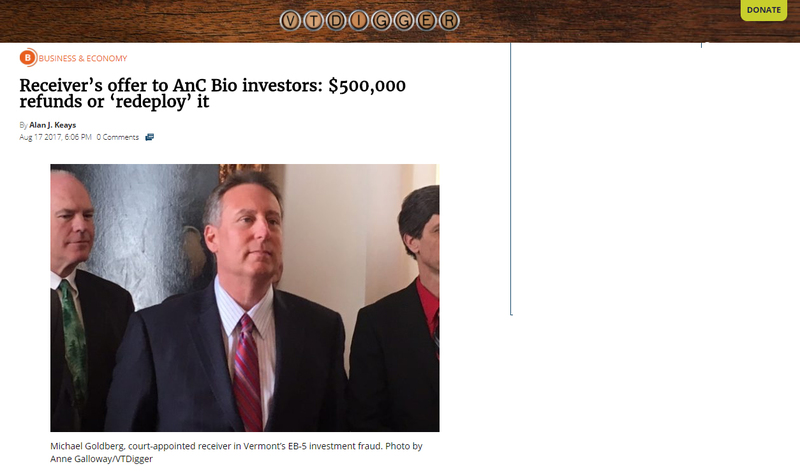 More than 130 EB-5 investors in a proposed $110 million biomedical research facility in Newport later deemed by regulators “nearly a complete fraud” have a choice to make.

But the clock is ticking.

The investors have until Aug. 31 to decide to either get back their $500,000 investment in AnC Bio Vermont, or put the money toward another project approved by a court to raise funds through the federal EB-5 visa program.

That program allows immigrant investors to become eligible for permanent U.S. residency provided their investment of at least $500,000 in a qualified project creates a required numbers of American jobs.

“If you elect to have your principal investment refunded, it is our belief that you will lose any EB-5 priority and eligibility to obtain permanent residence status that you may have,” Michael Goldberg, a court-appointed receiver, wrote in a recent letter to the investors.

“Alternatively, my immigration lawyers and I are developing a plan whereby you may be able to have your funds redeployed through the AnC Bio partnership into a new project and continue to maintain your eligibility to remove conditions on your residence.”

Goldberg oversees the Newport property as well as several others in Vermont’s Northeast Kingdom, including the Jay Peak and Burke ski resorts, that are part of the largest alleged EB-5 investor fraud case in the program’s history.

Regulators with the U.S. Securities and Exchange Commission characterized AnC Bio as “nearly a complete fraud” and accuse project developer Ariel Quiros of stealing money directly from the early investors in the project.

The SEC brought a lawsuit against Quiros, owner of Jay Peak ski resort, and Bill Stenger, the resort’s former CEO and president, in April 2016.

Regulators allege two men operated a “Ponzi-like” scheme and misused $200 million of the more than $350 million raised for seven out of eight EB-funded development projects, including AnC Bio. In all, the developers brought in $440 million from immigrant investors.

That group of 35 investors is not eligible for the “redeployment” offer since their funds never formally made it into the AnC Bio partnership, and they have already been provided refunds, Goldberg said.

Those eligible, he said, are the 133 EB-5 investors who had put a total of about $67 million into the AnC Bio Vermont project before the state required the developers to hold funds in escrow accounts.

That $150 million settlement includes the $67 million needed to pay for the refunds or reinvestments in another qualified EB-5 project.

Goldberg said those AnC Bio Vermont investors not already “conditional” U.S. residents based on paperwork filed when making their initial investment should consult with their immigration attorney to determine their eligibility to reinvest and become permanent U.S. residents.

The receiver said he expected that most of the 134 investors who are already “conditional” U.S. residents will choose to “redeploy” their money. That’s because they have already started the process to become permanent U.S. residents.

“Most have already been in the system for about two years,” Goldberg said Thursday. “We’re hoping to preserve that priority so they don’t have to go to the back of the line and they can pick up right where they left off.”

Going back to the end of the line, he added, can mean starting what could be a 10-year process over again from the beginning.

The receiver did say in his letter that while he initially had hoped that each investor seeking to “redeploy” their $500,000 could choose a qualified project on their own, through consultation with attorneys, that no longer appears to be the case.

“I am currently in the process of performing the necessary due diligence on several potential projects to choose one project into which all of the investors’ funds could be redeployed,” Goldberg wrote.

He said that choice will be based on the track record of the EB-regional center overseeing the project, the reputation of the developer, and the ability of the project to create jobs in a short period of time. Also, the developer is expected to waive any administrative fees for the AnC Bio investors, which can be in the range of $50,000 each.

Goldberg added that he won’t be the one deciding on the project. He said he’s hired an outside company that specializes in selecting EB-5 investment projects to perform “due diligence” on the developers and make a recommendation.

That recommendation will then be filed in federal court and Judge Darrin P. Gayles, who is presiding in the SEC, would ultimately have to approve it.

Investors not seeking that option can return to his office a separate form sent to them indicating they want their $500,000 investment refunded.

There are some investors, Goldberg added, who have decided to take that option.

“In fact,” he said Thursday, “I’m giving another three people their money back today.”