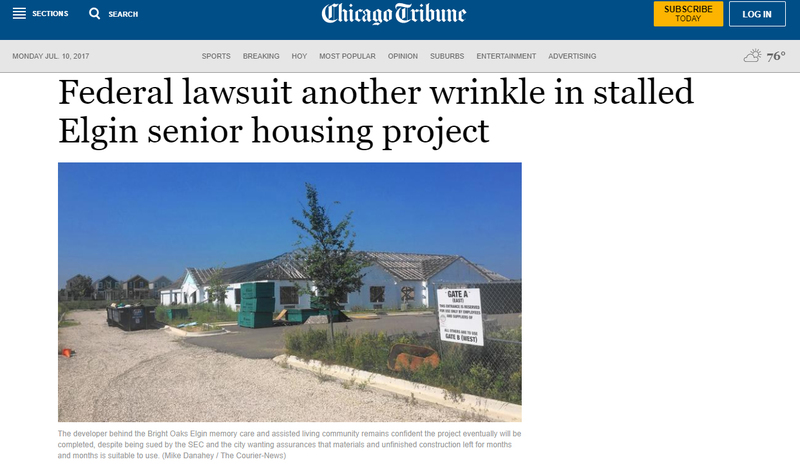 The developer behind the Bright Oaks Elgin memory care and assisted living community remains confident the project eventually will be completed, despite being sued by the SEC and the city wanting assurances that materials and unfinished construction left for months and months is suitable to use.

Facing allegations of misconduct and financial impropriety in a federal lawsuit, the developer of a stalled senior housing project in Elgin said the company remains committed to the development.

Bright Oaks Group has completed a project in Aurora and has unfinished projects in Elgin, West Dundee and Fox Lake, according to a lawsuit filed by the U.S. Securities and Exchange Commission.

Elgin officials issued a demolition order and a notice of unsafe conditions late last year, and construction at the west side project has been halted.

"The outlook for Elgin Memory Care is very promising, as multiple financing sources have interest in participating in the project," Kameli said in an email. "We are hopeful to have the negotiations completed in the next three to six months and resume construction with the cooperation of all governmental agencies involved."

Community Development Director Marc Mylott said the city has been following procedures set forth in the Illinois Demolition Act to address issues. The developer was sent one last notice last week, he said.

"The notice gives 15 days to repair or demolish what's been built," Mylott said. "Past that, if nothing is done the city would seek permission in Kane County Court to clear the property." 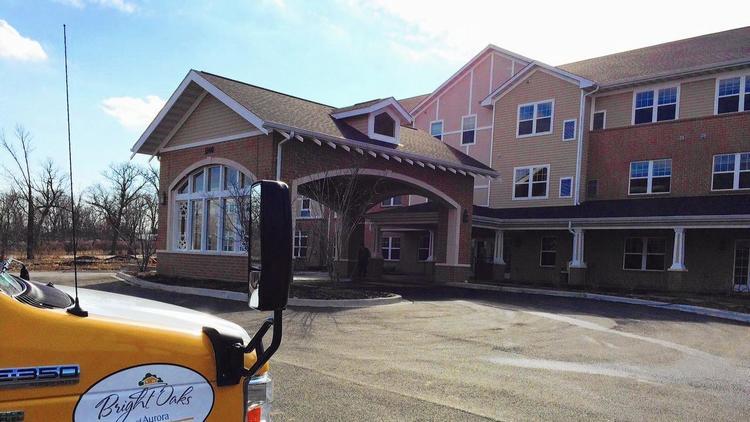 Bright Oaks of Aurora is seen from the outside, where it sits overlooking the Fox River near the Sullivan Road bridge.

Mylott said at a March building commission meeting, the developer was told the city doesn't want the property to be torn down, and would welcome Bright Oaks Group making repairs.

Mylott said the developer was asked to provide an item-by-item account of materials and the site, what has been constructed and what needs to be fixed or repaired. The developer was told a list he wound up providing was not specific enough, and the last communication received from Bright Oaks was from its director of construction, Lon Marchel, dated May 10.

Bright Oaks of Elgin has been under construction off of Route 20, west of Nesler Road and adjacent to the West Point Gardens subdivision. The project was approved by the city in 2014. According to the Bright Oaks Group website, the Elgin facility is supposed to hold 56 suites for assisted independent living and 25 suites for memory care living.

In December, city building official Raoul Johnston met representatives from Bright Oaks at Elgin City Hall to discuss completing construction of the facility, as the permit for the project was set to expire that month. A letter sent prior to the meeting noted the city issued permit extensions for the project June 20, 2016, but that since that time "there has been no substantial work performed at this project site."

The city contends that the property constitutes an unsafe condition for a list of reasons, including that the incomplete structure lacks the structural integrity of a complete and approved structure, and it lacks any fire warning devices or suppression systems. The structural integrity of the components and building materials is uncertain given prolonged exposure to the elements. And building materials have been stored and stacked outside the construction fencing, the document states.

The SEC filed its 43-page case last month against the development group. Among its allegations are that Kameli's brother, Taher, contrary to telling investors that they would each invest in one specific project diverted investor funds from one project to another and "spent a significant portion of investment proceeds for his own benefit, for the benefit of his brother, and for the benefit of companies he owns."

Kameli declined to address the allegations in the lawsuit.

"I cannot comment on an ongoing case," he said.

The lawsuit alleges that "misconduct has left most of the projects without money to complete construction."

The lawsuit alleges that the Aurora Bright Oaks project is the only one that has been completed. According to the website, the Aurora facility can accommodate 60, and officials have said there are 12 residents.

In addition to the three in Illinois, four projects in Florida are also incomplete. The suit claims contractors have stopped working in Elgin and Fox Lake and have claimed they are owed about a combined $3.7 million from the developer.

The Commission has asked the court to not allow the defendants to use to a visa incentive program to seek further investors, for a court-appointed receiver and for the court to freeze business assets.

According to the lawsuit, the group has been using a federal program known as EB-5, a visa program that provides a method of obtaining a green card for foreign nationals who invest money in the United States.

To be eligible, individuals must invest between $500,000 to $1 million in America, creating or preserving at least 10 jobs for American workers. None of those jobs can go to the investors or their immediate families.

According to the lawsuit, the group has found more than 220 such investors, primarily from Iran and China, and has raised about $88.7 million.