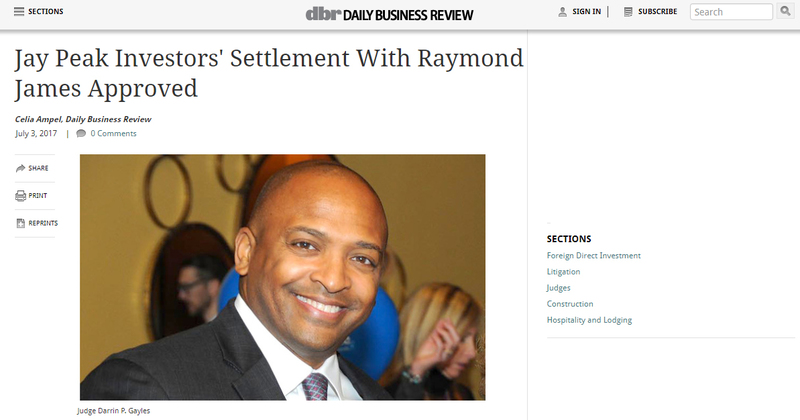 Friday's order benefits immigrant investors who put funds into a Vermont ski resort and surrounding projects in an effort to secure a green card by creating jobs through the EB-5 investment program. Instead, the funds were misused by Jay Peak's owners, the Securities and Exchange Commission claims.

By July 19, receiver Michael Goldberg of Akerman in Fort Lauderdale will have $91 million to distribute, including $67 million for those who invested in a biomedical facility that won't be completed. Nearly $20 million will go to construction of the Stateside Hotel, and the remaining funds will pay debts owed to suppliers for two hotel projects.

A second distribution next month will satisfy other creditors in the estate, Goldberg said. Gayles ordered $25 million to be held for attorney fees and costs, with any payments from that fund subject to his approval.

"It's a great result for the creditors of this case," Goldberg said. "Most of them should be able to get their green card, and those that are not that fortunate will get their money back in full."

Goldberg called the case a "team effort." Gayles issued a 40-plus-page opinion paving the way for the settlement. The SEC set forth the whole case, and the other lawyers deserve plenty of credit, too, he said.

Raymond James was represented by the Kenny Nachwalter firm in Miami. The financial services company said in a statement that it was committed to redressing the victims' losses.