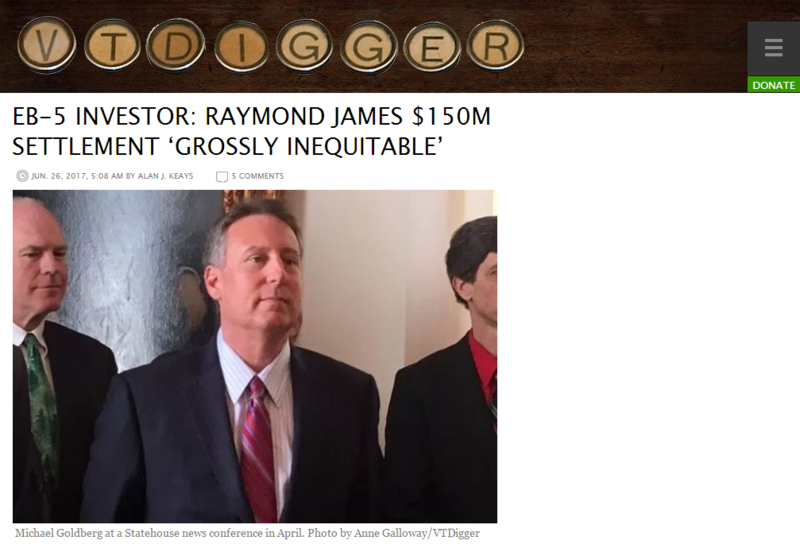 The first objection has been raised to a proposed $150 million settlement with a financial services firm linked to the EB-5 immigrant investor scandal that played out in Vermont’s Northeast Kingdom.

However, it may be too late for that investor as he seeks to put the brakes on the deal.

“This agreement is grossly inequitable!” Guangyi Xiong, a resident of Beijing, China, wrote in a recent letter to federal Judge Darrin P. Gayles.

Gayles is expected to rule any day on whether he will approve the proposed $150 million settlement between Raymond James and Associates Inc. and a court-appointed receiver now overseeing the properties at the heart of the investor fraud case.

The judge had set a deadline of June 5 for any party to file an objection and none were submitted.

Xiong, in his one-page letter filed last week, said he was not made aware of the settlement until after the deadline passed.

The agreement, if approved by the judge, would also include a bar order, shielding Raymond James from lawsuits brought by investors in the projects that led to the fraud case.

Xiong was one of the investors in a project backed by Jay Peak owner Ariel Quiros and Bill Stenger, the resort’s former CEO and president. The two developers raised money through the EB-5 program to fund massive improvements at the ski resort in the town of Jay, and also proposed a $110 million biomedical research facility, AnC Bio Vermont, in the nearby Northeast Kingdom community of Newport.

Xiong was among the 35 EB-5 investors who each put $500,000 in that project, known as Phase VII, and had their funds held in escrow.

EB-5 investors put $500,000 into a qualified project, and if that project leads to the creation of the required number of jobs that investor becomes eligible for permanent U.S. residency.

After March 2015, money from investors in AnC Bio was held in an escrow account under state purview. VTDigger published a story that month about how the developers had given themselves payouts from the AnC Bio Vermont project. Not long after, the state “partially cleared” AnC Bio and an expansion at Q Burke, allowing the developers to solicit more investors with restrictions on how the money could be spent. Ultimately, the project was never built and the money in escrow remained untouched in a bank account.

For seven months prior, the state had prohibited the developers from seeking investor funds for the project. That’s because of questions were raised about AnC Bio Vemront when an affiliated company in Seoul ran into financial problems, forcing the sale of its headquarters to cover debts. In 2012, the company’s president, Alex Choi, a business affiliate of Quiros’ was prosecuted by the Korean government for allegations of investor fraud. Just weeks afterward, the state regional center approved an agreement with Quiros and Stenger for a sister project in Newport.

Another 133 EB-5 investors put a total of $66.5 million into AnC Bio project before the state required the developers to hold funds in escrow accounts.

Regulators with the U.S. Securities and Exchange Commission characterized AnC Bio as nearly a complete fraud and accuse Quiros of stealing money directly from the early investors in the project.

The SEC brought a lawsuit against Quiros and Stenger in April 2016. Regulators have charged the two men of operating a “Ponzi-like” scheme and misusing $200 million of the more than $350 million raised for seven out of eight EB-funded development projects in the Northeast Kingdom, including AnC Bio. In all, the developers brought in $440 million from immigrant investors.

Earlier this year, a judge approved a request from Michael Goldberg, the court-appointed receiver, to return $17.85 million to investors, like Xiong, whose money had been kept in an escrow account.

While he is getting his money back, Xiong says that he, and other investors like him, will have no opportunity to get a green card. The immigration status of about 400 investors out of more than 800 is in limbo because of the Ponzi scheme. Three projects — the Stateside condos, Burke Mountain and AnC Bio Vermont — were not completed because the developers ran out of money.

In response to Xiong’s letter, a motion filed on behalf of Goldberg, the court-appointed receiver, states that the judge should move forward with the Raymond James settlement.

“The Receiver regrets that Mr. Xiong is unhappy with the Settlement Agreement … and understands the frustration he and other investors have experienced due to the fraud the Defendants in this case committed on them,” the filing states.

“But that aside, Mr. Xiong has not cited anything that is legally inadequate or otherwise objectionable about the Settlement Agreement.”

Xiong, according to the receiver, is not a member of “the class” that the settlement applies to.

The settlement was negotiated on behalf of Jay Peak investors and the early group of 133 AnC Bio investors.

The judge earlier this year approved the return of money for the class of investors in AnC Bio Vermont whose investments were held in escrow.

“Mr. Xiong’s Letter primarily expresses frustration with the fact that most Phase 7 investors do not have the opportunity to obtain permanent residency. We understand the frustration,” the filing on Goldberg’s behalf reads.

“We wish there was more we could do about that,” the motion adds. “Unfortunately, the Receiver does not have control over the U.S. Citizenship and Immigration Services.”

Xiong could, the filing states, find another EB-5 project and invest his returned $500,000 into that as he seeks to obtain a green card.

Also, according to the response, the receiver sent a mailed notice of the settlement agreement to Xiong and his lawyer. The proposed settlement was also advertised in local news outlets.

“In any event, the Receiver is not suggesting that Mr. Xiong’s Letter be disregarded because the objection deadline has expired,” Goldberg wrote, “Mr. Xiong’s Letter simply does not provide a basis to disapprove the settlement.”

Neither Xiong nor Goldberg could be reached for comment.

Proceeds from the Raymond James settlement will be used for a variety of purposes, including paying contractors and businesses owed money for work they did on projects, to help finish developments that weren’t fully built, and to compensate some of the investors who put money into projects that didn’t even get off the ground.

Goldberg, in a lawsuit he brought against Raymond James, alleged the financial services firm “aided and abetted” Quiros in a “Ponzi-like” scheme in which he misused investor funds and “looted” more than $50 million.

Raymond James, in the settlement, admits no wrongdoing.