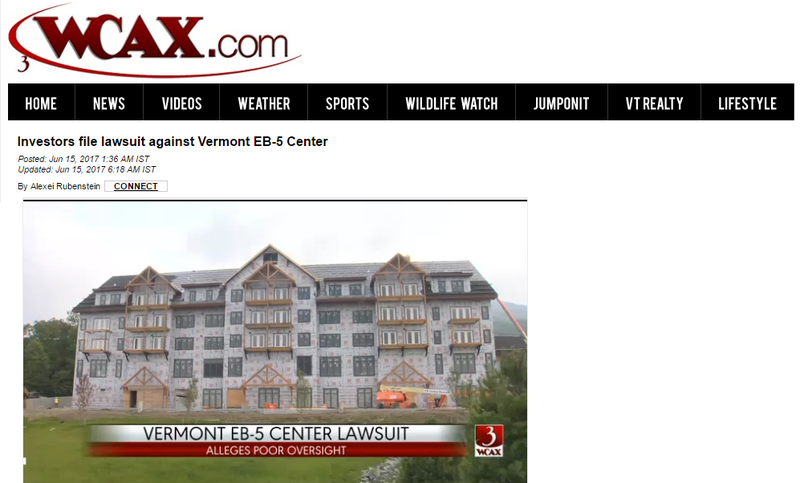 Earlier this spring, the Trump administration extended the controversial federal EB-5 foreign investor program. That's the program that fueled the state's largest ever fraud case involving the owners of Jay Peak and Burke Mountain. Now, the future of the Vermont EB-5 Center is very much up in the air.

But Barr says many of those dreams were scuttled when the EB-5 Kingdom Con fraud hit the news.

"We were told very clearly, 'Sorry Russ, we respect your project and your team, but there's no way any investor is going anywhere near the state of Vermont.' And that's very upsetting," said Barr.

Barr says the Vermont EB-5 Center, the state-run agency responsible for overseeing the federal visa program for foreign investors, is grossly negligent. The private lawyer this week filed a class-action lawsuit in Lamoille County Court on behalf of foreign investors that targets the state program.

"It's crystal clear that they had oversight, responsibility, management administration, and we all know to 100 percent that they did nothing, not even the slightest bit of oversight," said Barr.

Gov. Phil Scott, R-Vermont, has said he wants "to restore faith and trust" in the program, but it may be a tall order. State documents obtained earlier this year by Vt. Digger show that federal officials at one point considered closing the program and it remains under scrutiny.

"We've been responsive since the Jay Peak investigation broke to their requests for information and have received no indication that they're anything other than pleased with the nature of those responses," said Michael Schirling, Vt. Agency of Commerce & Community secretary.

Yet the Scott administration recognizes the EB-5 Center is tarnished and is assessing how to move forward. Meanwhile, lawmakers have their concerns and hope for a future investigation.

"We really need to re-establish some order and integrity to the program if we were going to allow foreign investment, the state's reputation isn't being undercut," said Sen. Tim Ashe, D/P-Senate President.

While Stowe Aviation has had its problems with the Vermont center, successful projects are moving forward. Last fall, Trapp Family Lodge opened a new beer house and restaurant overseen by the Center. And this week, Mount Snow broke ground on the latest of its $52 million in projects. While officials remain positive, they say they're also hedging their bets by applying for their own federal permit.

"We wanted to have a backup plan in case the Vermont Regional Center was no longer in existence," said Dick Deutsch, Mount Snow president.

Barr says that with the Vermont program's reputation, it's hard to believe they can continue.

"The only state-run regional center in the country has failed miserably," said Barr.

His lawsuit will need to be certified by a judge to go forward.