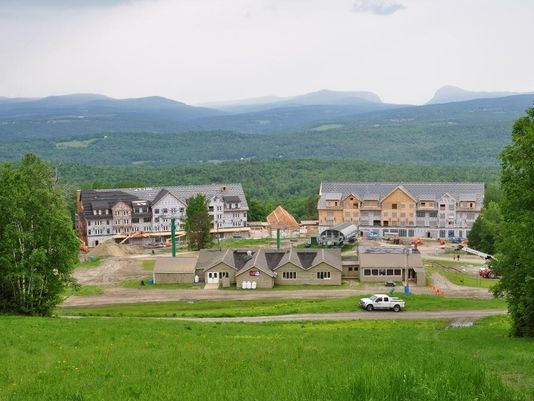 Bill Stenger, CEO of Jay Peak Resort, said Thursday the Department of Financial Regulation has approved a revised private placement memorandum for the Q Burke Resort Hotel and Conference Center, and that he is leaving Saturday for Vietnam to begin again raising money for the project.

“We’ll be there for a week,” Stenger said of the upcoming trip. “We have appointments with over 120 investors.”

A private placement memorandum includes the documents potential investors receive to decide whether to put money into a project.

The Burke project is one part of a massive redevelopment program in the Northeast Kingdom being spearheaded by Stenger and his partner Ariel Quiros using the federal EB-5 immigrant investor program. The program offers the possibility of citizenship to foreign nationals who invest $1 million in a project in the United States that creates 10 jobs.

The threshold is lowered to $500,000 for projects in a “targeted employment area.” A TEA, as they are known, is an area where the unemployment rate is 150 percent of the national average. The lesser investment also is allowed in rural areas where the population is under 20,000 people. The Northeast Kingdom qualifies on both counts.

The Department of Financial Regulation could not be reached for comment late Thursday.

The department required Stenger to revise the private placement memorandum for Q Burke in light of the controversy that has been swirling around Stenger’s EB-5 projects over the past year.

The trouble began in May 2014 when Burlington real estate magnate Tony Pomerleau pulled out of a deal he and Stenger had struck for lakefront property Pomerleau owns in Newport. Another of Stenger’s EB-5 projects, a $100 million Newport Marina Hotel and Conference Center, was slated for that property, now a shopping center.

Over the next year, reports in the media revealed Stenger and Quiros had lost the trust of some of the 35 immigrant investors in the first EB-5 project at Jay Peak, the Tram Haus lodge, and that the Securities and Exchange Commission was investigating Stenger and Quiros.

State regulators describe the SEC action as a “review,” not an investigation, as does Stenger. The SEC never confirms investigations.

In February, the Agency of Commerce and Economic Development, which is responsible for EB-5 projects in Vermont, inked an “oversight partnership” with the Department of Financial Regulation, ratcheting up the scrutiny of the projects.

Stenger said Thursday he is looking to raise an additional $30 million for the Q Burke resort, which will include 120 suites, a conference center, restaurant and other amenities. Stenger called the site one of the most “breathtaking” in New England.

“There’s no other hotel of any substance in the entire region of East Burke,” Stenger said. “It’s a beautiful property. It’s going to make such a positive impact to the ski area and community in terms of job creation.”

The approval of the Q Burke private placement memorandum ends an anxious period for Stenger during which construction on the project, by Peak CM of Winooski, continued while he was unsure he would be able to continue to raise money to complete the hotel. Stenger said he has already raised about $70 million for the project.