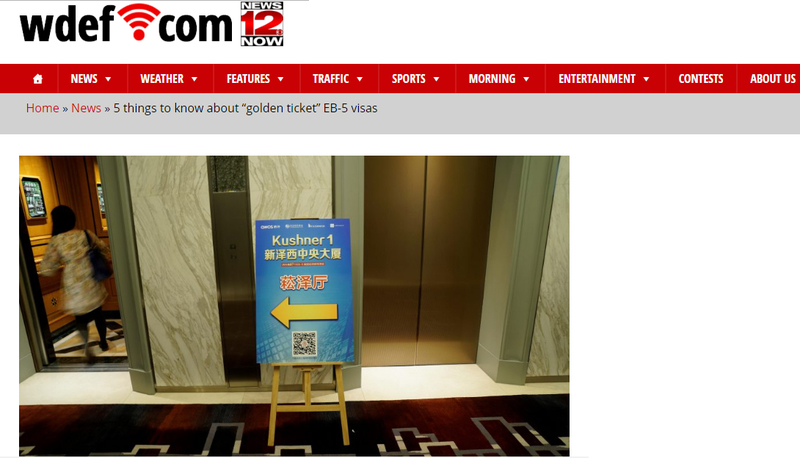 The U.S. government program is again drawing scrutiny after Nicole Kushner Meyer, the sister of White House senior adviser Jared Kushner, last weekend touted the fast-track to legal status as part of a real estate pitch to Chinese investors in which her family’s company has a stake. Meyer reportedly was selling investments in a New Jersey luxury apartment complex as part of an effort to raise $150 million in funding for the project.

On the face of it, the EB-5 visa is straightforward. In exchange for investing a substantial sum of money in a business and creating at least 10 permanent jobs for U.S. workers, which benefits the economy and local communities, wealthy foreigners are granted green cards by the government. Yet the program, which launched in 1990, has had its fair share of misuse and scandals, such as Ponzi-like schemes and embezzlement.

Those missteps can overshadow the advantages of the program, said Joe Fitzpatrick, whose New England Sports Village has raised money through the EB-5 program from foreign investors. He is also a partner in Ashcroft Sullivan Economic Development Centers, which counts former U.S. attorney general John Ashcroft as a principal and which collects and counts job credits to support EB-5 visas.

EB-5s grew more popular in the wake of the financial crisis, when developers had a tougher time raising money from U.S. banks and turned to the visa program to find new sources of capital, Fitzpatrick noted.

“The benefit is it brings money back to the U.S. when we’ve had years of outsourcing,” he said. “My view on it is: Do an objective assessment. I’m a real-life person who is benefiting from the program. My cost of capital goes from 15 percent to 20 percent to 5 percent, and that make a difference between building three buildings versus seven buildings. Economic growth does come from this.”

Foreign investors must do their due diligence on the U.S. businesses they would invest in as part of an EB-5 visa program, of course. Yet Meyer’s approach in China has raised questions about potential conflicts of interest and ethical issues, given Jared Kusher’s role in the Trump administration. A Kushner Companies spokesperson apologized on behalf of Ms. Meyer if “mention of her brother was in any way interpreted as an attempt to lure investors.”

“Abuse of power pure and simple. Congress should cancel EB-5 visa program if Kushner properties not disqualified,” Richard Painter, the chief White House ethics lawyer for President George W. Bush, said in a tweet, alluding to Meyer’s highlighting the visas as part of a pitch to raise funds from foreign investors.

While President Donald Trump has taken a hard-line toward immigration, the future of the EB-5 visa received a lifeline earlier this year when Congress extended the program until September 30. Both Democrats and Republicans have taken aim at the program, with Senators Dianne Feinstein, D-California, and Chuck Grassley, R-Iowa, introducing legislation earlier this year to nix the program.

“It is wrong to have a special pathway to citizenship for the wealthy while millions wait in line for visas,” Feinstein said in a statement earlier this year.

Below are five facts to know about the EB-5 program.

How many foreign investors use the program? Demand for the visas has picked up in recent years. In fiscal year 2016, the U.S. received more than 14,100 applications, more than double the roughly 6,000 applications just three years earlier. Foreign investors have a good shot of receiving a stamp of approval. About 7,600 applications were approved in 2016, while only 1,735 were denied, according to the U.S. Citizenship and Immigration Services.

What type of fraud has been tied to the visa? Many of the cases involve a U.S partner misusing the funds invested by foreign nationals. In one case, the Securities and Exchange Commission charged two U.S. businessmen with raising more than $350 million to build a Vermont ski resort and biomedical research facility, but the “Ponzi-like” scheme involved targeting new EB-5 investors to fund shortfalls. The SEC alleged $50 million was used for personal expenses by one of the American businessmen.

“[N]o one’s looked at what the jobs really are, whether they’re good jobs, whether they go away after two years, whether, if they’re in construction or renovation, they create any sort of follow-through, Audrey Singer, a senior fellow with the Urban Institute who has studied the EB-5 program. “Let’s take a hotel project. You’re projecting there’s going to be a lot more jobs — service jobs — associated with it. But we don’t really have enough information to evaluate that.”

How much do foreign investors need to spend for a visa? Foreigners and their relatives can apply for permanent residency in the U.S. if they invest $1 million in a new commercial enterprise that creates 10 full-time jobs for American workers. The other option is to invest $500,000 in a business that’s in a “targeted employment area,” which the government defines as a rural area or a region with a high unemployment rate. After meeting the eligibility requirements, applicants can apply for lawful permanent residency after 2 years.

Are there any EB-5 success stories? Supporters of the program point to high-profile developments such as the Brooklyn Navy Yard, which drew on EB-5 investment to construct a new building, expand an existing facility and complete infrastructure work. A developer of the site called the EB-5 investors “a gift from the gods.”

Even so, the Government Accountability Office in 2015 said the EB-5 program was falling short on tracking its economic benefits and outcomes. “There are many projects that have been successful, from the point of view that the money’s there, the project happens, people get visas,” Singer said.

Where are EB-5 investors coming from these days? Nicole Kushner Meyer had the right idea pitch the project, which involves a luxury apartment complex in Jersey City, New Jersey, in China. The share of Chinese applicants for EB-5 visas has skyrocketed since 2008, with many of those applicants flush with money from China’s own real estate boom, according to a 2014 Brookings Institution report. Chinese applicants were granted nine times the number of EB-5 visas as residents of the country with the second-largest group of applicants, South Korea, the report noted.